Be Our Guest Restaurant

Be Our Guest Restaurant is a counter/table service restaurant found in New Fantasyland.

Be Our Guest Restaurant was initially announced at the D23 Expo in 2009 as one of the focal points of the Fantasyland Expansion [1]. At the Expo, guests were told that Be Our Guest Restaurant would take place inside the Beast's Castle and that it would allow guests to eat in the ballroom that is shown in film "Beauty and the Beast". Eventually however information came out that guests would be able to eat in one of the three dining rooms: the Rose Gallery, the Ballroom, and the West Wing. [2]

For lunch, guests enter Be Our Guest Restaurant through a hallway lined with suits of armor. Here, they can hear quite whispering coming from the walls. After checking in, guests are given an “enchanted rose” and told to select any open table [7]. They are also given the option of ordering their meals on the touch screen; if they have not previously ordered using the My Disney Experience App (guests have the ability to order their meals up to 30 days before their visit). If guests are visiting for dinner, they enter the restaurant and go directly into the Ballroom [8]. 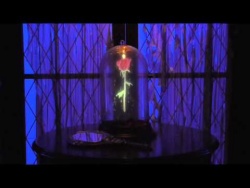 The Enchanted Rose inside the West Wing dining room in Be Our Guest Restaurant.

Be Our Guest is made up of three distinct dining rooms. The largest of the three is the Ballroom, where Belle and Beast dance in the film. This room is set during a time when Beast's curse is starting to be broken, and outside guests can see that it is snowing. The music that plays in the Ballroom features a 50 piece orchestra performing songs from Beauty and the Beast.

The smallest of the dining rooms is the dimly-lit West Wing. This room is set during the time where the Beast's curse was in full effect. The enchanted rose from the film can be found in this dining room, slowly losing its pedals. When the last pedal is lost from the rose, thunder can be heard outside and when lighting flashes, a portrait of Beast as a young prince (with a claw mark through it) changes and reveals Beast in his monstrous state (an effect similar to the portrait effect found in the Haunted Mansion). The music in the West Wing is darker and more ominous than that played in the other two dining rooms.

Click below to see Be Our Guest’s current menu: