A theme park about animals was not high on Disney’s list of ideas, but surveys showed that Disney and animals tested well, and Disney had a lot of intellectual properties that showcased animals. Because of this, Michael Eisner sent the idea for an animal theme park to Imagineering. In 1990, Imagineer Joe Rohde met with Eisner to discuss the new park. Rohde’s vision for the park was threefold, it would feature traditional theme park components, an Epcot Center syle pavilion, and a nontraditional zoo. 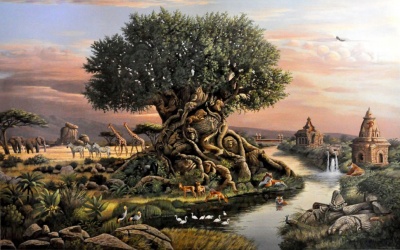 Eisner agreed to the basic premise of the park, commenting that like the Magic Kingdom, Disney should also have an Animal Kingdom. With this objective in mind, Rohde and his team of six Imagineers (Kevin Brown, Zofia Kostyrko, Kevin Brown, Christopher West, Tony Marando and Patsy Tillisch) set out to create a basic outline for the new park.

In July 1990, Joe Rohde and his team flew to Africa to get first hand experience of the type of environment that they wished to create. In total, during the development of Disney’s Animal Kingdom, Rohde and his Imagineers visited Africa six times. Using these trips as inspiration, the team eventually used much of their experience when creating Kilimanjaro Safaris.

As plans for the park continued to develop, Michael Eisner wondered if simply encountering animals would be a big enough draw for guests. To prove that this was not the case, Joe Rohde brought a 400 pound Bengal tiger into a meeting he was having with Eisner and Frank Wells. As Rohde gave his presentation, the tiger sauntered around the room. After feeling the effect of being so close to a tiger, Eisner and Wells relented and live animal encounters would be the focal point of Animal Kingdom.

During another meeting with Eisner and other executives, the Disney CEO told Imagineers that he wanted a DinoLand. Other ideas stemming from these meetings included the Oasis (which would serve as the entryway) Safari Village (the parks hub) and Discovery River. By 1992, the basic layout of the park was in place. Guests would enter through the Oasis before arriving at Safari Village. From there, guests could explore the park's other lands including DinoLand, Africa, Asia, and the land dedicated to imaginary animals.

“This is to the traditional zoo as the motion picture was to the stage play. A leap forward that keeps the concept of combining education and entertainment alive and well. The need for awareness of endangered animals and their environments has never been greater. We are in a unique position to promote deeper understanding and love for all animals." 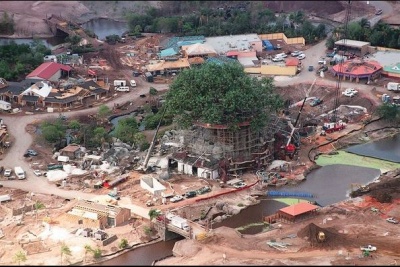 Construction on Disney's Animal Kingdom began in August of 1995. Four million cubic yards of dirt were moved and nearly 40,000 plants were added during the parks construction [2]. During this process it was decided that the plants in Animal Kingdom would need to be in the ground for two growing seasons before the animals arrived. This meant that the horticulture team led by Disney Legend Bill Evans had until the spring of 1996 to get all the plants in place [3]. This deadline was met, and the fall of 1997 the animals were brought in to the park [4]. They came from various zoo's or wildlife preserves around the world. A few animals were also from the wild, but were too injured to be re-released. In total Animal Kingdom is home to over 1,700 animals.

As construction continued, funds for the new park began to dwindle. Eventually it was decided that Animal Kingdom would have to open in three phases. The first phase would consist of The Oasis, Safari Village, Africa, Conservation Station, and an unfinished Asia. Also included in phase one would be either DinoLand USA or Beastly Kingdomme [5]. Disney eventually decided to build DinoLand USA, possibly due to the new movie “Dinosaur” that was to be released in 2000 [5].

Phase II was planned to be the completion of Asia, along with the construction of Beastly Kingdom. Due to the park not being completed on opening day, Camp Minnie-Mickey, a place where guests could meet various Disney characters, was created as a temporary land. Camp Minnie-Mickey was to be essentially a place holder until Beastly Kingdom could be built [6].

Like the other Disney parks, Imagineers knew that Disney's Animal Kingdom would need a "weenie" or icon to draw guests into the park.The first icon considered for the park was the Animal Carousel [1]. This three tiered structure would have featured birds, animals and fish that guests could ride on as they went around the carousel. Michael Eisner eventually rejected this idea because he though it was "too frivolous"[1]., and Imagineers came up with a new icon- The Tree of Life.

Initially, Imagineers had a tough time figuring out how to create the massive icon [7]. The tree had to look authentic, while being able to withstand hurricane level winds[7] . On top of that, the tree would also have to house the attraction It's Tough to be a Bug! (the attraction was chosen over an earlier idea of having a restaurant inside the tree)[7] . Eventually however, Imagineers came up with a fairly simple solution.

First, they took the structure of an oil rig for the base[7] . 45 secondary branches were then added to the tree, followed by 756 tertiary branches and finally 891 end branches. The Tree was then covered with 102,583 man-made leaves. After the structure was complete, 20 artisans carved over 300 animals into the tree[7] . When the Tree of Life was completed it stood 145 feet tall and looked as if the animals themselves were making up the tree's trunk[7] .

Disney's Animal Kingdom opened on April 22, 1998 (Earth Day). At the opening of the park, the song “The Circle of Life” from Disney's The Lion King played as guests were showered with rose petals [8]. A half hour after the park had opened; the parking lot was filled to capacity, while 45 minutes later the park itself was filled to capacity [9]. The first official guests to Disney's Animal Kingdom were Brenda Herr, her husband Damon Chepren, and their son Devon [9]. They were greeted by Roy E. Disney and given lifetime passes. Unlike previous theme park openings, the event was not a star studded one although Michael J. Fox, Drew Carey, Stevie Wonder and David Copperfield did appear [10]. Some 5,000 reporters were also on hand as Disney CEO Michael Eisner read the park’s dedication:

Welcome to a kingdom of animals… real, ancient and imagined: a kingdom ruled by lions, dinosaurs and dragons; a kingdom of balance, harmony and survival; a kingdom we enter to share in the wonder, gaze at the beauty, thrill at the drama, and learn. 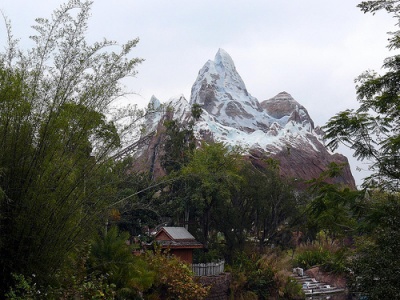 Although relatively young compared to the other Disney Parks, Animal Kingdom has gone through several changes. The first major expansion of the park came in 1999 when Asia was finally completed [11].Added at this time were the popular attractions Maharajah Jungle Trek [12] and the Kali River Rapids. The Discovery River Boats (which were located in Asia) closed with the opening of the new attractions [13].

In 2000 and 2001 many of Animal Kingdom's lands were renamed. The former Safari Village became Discovery Island [14] and Conservation Station became Rafiki's Planet Watch [15]. The change in name to Discovery Island coincided with the closing of the Discovery Island attraction on Bay Lake. Also changing its name at this time was the popular DinoLand USA attraction Countdown To Extinction. That ride was re-named after, and slightly altered to tie into the 2000 Disney movie Dinosaur [16].

2001 also saw another expansion in Disney's Animal Kingdom. At this time, Chester and Hester’s Dino-Rama was added to DinoLand USA. This mini land housed Midway Games (later renamed Fossil Fun Games) and the TriceraTop Spin [17]. The following year on March 31, 2002, Primeval Whirl was added to the area [17].

The next set of majorchanges came to Animal Kingdom in 2006. In DinoLand USA, Finding Nemo- the Musical replaced Tarzan Rocks, which had been there since 1999 [18]. Also in 2006, the “E-Ticket” roller coaster Expedition Everest was built in Asia. The attraction is a roller coaster set in the Himalayas, and it includes a close encounter with the fabled Yeti. By including the Yeti in the attraction, Disney's Animal Kingdom finally featured a mythical creature (which had been promised since the park’s dedication).

In 2014 Camp Minnie-Mickey was closed in order to make way for a new area of the park based on James Cameron's 2009 film “Avatar” [19]. Following the land's closure the Festival of the Lion King attraction was relocated to a new section of Africa called “New Harambe” [20]. In 2015 the Harambe Marketplace opened to guests. The new area was themed around a “Colonial-era train depot design complete with a 1960s water tower”. Inside the Harambe Marketplace guests can visit various food vendors who sell African inspired quinine [21].

2016 saw several new experiences come to Animal Kingdom. The Jungle Book: Alive with Magic stage show opened as a temporary offering based on the Disney live-action film The Jungle Book. Also debuting at this time was the Kilimanjaro Night Safaris and the Tree of Life Awakens, a nighttime event where magical fireflies make animal spirits come alive on the Tree of Life. [22].

On February 17, 2017, Rivers of Light, Disney's Animal Kingdom's nighttime show, opened to guests [23]. Finally on May 27, 2017, Pandora- The World of Avatar opened to guests [24]. Based on the 2009 James Cameron film, Pandora- The World of Avatar transports guests to the planet Pandora and features the attractions Flights of Passage and Na'vi River Journey

One change that has yet to (and may never) come to Animal Kingdom is the addition of Beastly Kingdomme. Despite a dragon being featured on the park's logo, there are currently no plans to build the land. Camp Minnie-Mickey proved to be popular with guests, and thus the land set aside for Beastly Kingdom remained in use. With the announcement of a land based on Avatar it looks unlikely that Beastly Kingdomme will be built. Despite this, remnants of the planned Beastly Kingdom can still be found including:

'Once upon a time, no vegetation would grow on Discovery Island. There were no trees, no shrubs, no flowers, nothing. It was a barren piece of land. Then, one day, a tiny ant planted a seed and made a wish. He asked for a tree to grow – a tree large enough to provide shelter for all the animals. Magically, the ant’s wish came true and a tree began to grow -- and it kept growing until there was room beneath its limbs for all the animals from A (ants) to Z (zebras). And as the tree continued to reach for the heavens, the images of all the animals that took shelter beneath its shade appeared on its trunk, roots, and branches.[28]

Located at the front of the park, the Oasis is the first land that guests encounter. Guest services and the Rain Forest Cafe are located here. The Oasis leads to the park's hub, “Discovery Island”.

Oasis Exhibits- This walking trail allows guests to see many animals including: the giant anteater, wallabies, exotic boar and more.

Home to the popular Kilimanjaro Safaris, the Africa section of the park takes place in the fictional village of Harambe. According to the land's backstory, Harambe was once a colony before gaining its freedom in 1961 after a peaceful revolution. Harambe is currently home to a wildlife reserve, where tourists can see some of Africa's most interesting animals. In 2014 the Africa section of the park was expanded to house the relocated Festival of the Lion King.

Perhaps the most popular land in Disney's Animal Kingdom, Asia was not complete until 1999. Set in the township of Anandpur, Asia is home to the popular Kali River Rapids and Expedition Everest.

DinoLand USA is home to the Dino Institute, which allows guests to travel back in time and come face to face with dinosaurs. In 2001 the land was expanded to include Chester and Hester’s Dino-Rama. This new area is themed like a roadside attraction which was built to capitalize on the success of the nearby institute.

Pandora- The World of Avatar