Finding Nemo- The Musical is an attraction located in the DinoLand USA section of Disney's Animal Kingdom.

Finding Nemo- The Musical was announced on April 7, 2006 at the grand opening of Expedition Everest [1]. The show was described "Broadway-caliber short-form" stage musical [2]. According to Anne Hamburger, Executive Vice President of Disney Creative Entertainment, Finding Nemo- The Musical marked the first time that Disney had made a non-musical animated film into a musical [2]. Finding Nemo- The Musical was directed by Peter Brosius with music by Kristen Anderson-Lopez and Robert Lopez [3]. According to Anderson-Lopez, she was approached by Disney to work on the project after the company heard about her 15 minute retelling of Oedipus called "Oedipus A Capella" [4]. After joining the project, Kristen Anderson-Lopez suggested also hiring her husband to work on the new show [4] The puppets used in the show were created by Michael Curry, who co-created the puppets used in Broadway's "The Lion King" [3]. When discussing the creation of the attraction Jay Rasulo, Chairman of Walt Disney Parks and Resorts stated:

"It is our goal to

bring the undersea 'Nemo' characters to Disney's Animal Kingdom in a live setting in a way that captures what is truly special about the film. This production meets that challenge in a dynamic and wholly original way to bring us into the fantastic ocean world."

The show begins with Nemo and his wife Coral naming their newborn children. Suddenly, Coral and the family are attacked leaving only Marlin and Nemo as the surviving members of family.

The show then moves forward in time to Nemo's first day of school. Marlin and Nemo then sing “In the Big Blue World”, which conveys Marlin's fear and Nemo's interest in the possibilities of the ocean. Following “In the Big Blue World”, Nemo meets Mr. Ray (his schoolteacher) and his classmates. Although Marlin wants to stay and protect Nemo, the young clownfish eventually leaves for the "big drop off" with the rest of his class.

Although he is initially somewhat at peace with Nemo leaving for school, after talking to the other parents, Marlin begins to have second thoughts. The seen then cuts to Nemo and his friends daring each other to touch the "butt". At this moment however, Marlin enters the scene, reminding Nemo that he is not a great swimmer. Spurred on by his father’s doubt, Nemo begins to swim away from his classmates. At this time, he is swept away by human divers and taken aboard a boat.

As Marlin frantically searches for his son, Dory (a regal blue tang) crashes into him. Although Dory initially says that she has seen a boat, she sings “Dory’s Ditty” in which she explains:

I got this problem with my brain
Things get really scrambled in my head
I have no short term memory
I forget things almost instantly
I'm not even sure what I just said.

Following Dory's explanation, Marlin and Dory are approached by Bruce (a shark) and his friends Anchor and Chum (also sharks). Although it initially appears that Dory and Marlin will be eaten by the sharks, it turns out that the group is actually part of a support group whose motto is "fish are friends not food". The trio of sharks then sing a song also titled “Fish are Friends not Food”. 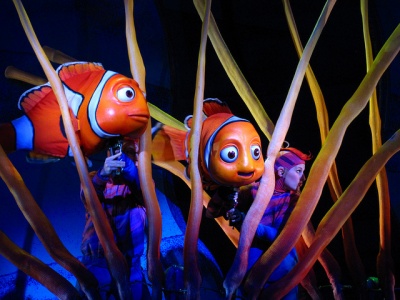 Following the end of Fish are Friends not Food, Dory and Marlin stumble upon a divers mask. While investigating the mask, Marlin accidently hits Dory causing her nose to bleed. Smelling the blood Bruce gets the urge to eat the fish (despite his pledge not to). While Anchor and Chum try to have an intervention to keep him from devouring the duo. Before Bruce can eat the duo, Marlin and Dory escape, ending the scene.

As the curtain rises, the scene changes to a dentist's office. As the dentist works on the teeth of a patient, he explains that he found Nemo on a coral reef and that he thinks that it will make a good present for his niece. Following this explanation, Nemo swims on stage and sings "Where's my Dad", in which he states that he is too small to be alone. Following the end of the song, a tribal chant begins the song "The Tank Gang". During the song and Nemo is introduced to the other creatures in the fish tank that he now finds himself in- Deb, Bloat, Bubbles, Peach and Gill. The group then explain that they were all bought from a pet store. After Nemo explains that he is from the ocean, a stork named Nigel appears outside the tank. After seeing the bird, the dentist shoos him away, stating that Nemo isn't for Nigel, but for his niece Darla. At the mention of Darla's name, all of the fish scream, alarming Nemo. The reason for their fear, is that Darla is “fish killer".

Although it seems that Nemo is done for, Gill declares that Nemo is small enough to help the entire group escape. Initially reluctant to participate due to his bad fin, Nemo eventually agrees. Gill then explains his plan while singing "We Swim Together". According to the scheme, Nemo will jam the tank's filter, causing the dentist to have to clean it. As he is cleaning the tank, the fish will be placed in plastic bags. Gill then tells the group that after they are in their bags, they will roll out the window and into the ocean.

Following the end of “We Swim Together”, the scene cuts back to Marlin and Dory sleeping in the ocean. As Marlin wakes up, he realizes that the diver’s mask they found is gone. Distraught that their only clue to his son's whereabouts is gone, Marlin claims that he may never see Nemo again. In an attempt to calm Marlin down, Dory sings "Just Keep Swimming". Following Dory's advice, the duo stumbles upon the mask which says “P. Sherman, 42 Wallaby Way, Sydney" on it.

As Dory continues singing Just Keep Swimming, Marlin grows impatient with her. The clownfish then tells her that she should stay while he continues his journey. After a brief argument, a group of moonfish arrive and ask Dory if Marlin is bothering her. Speaking to the group, Dory states that they are trying to get to Sydney. Upon hearing the name of the city, the moonfish form the shape of the Sydney Opera House and tell Dory and Marlin that they need to follow the East Australian Current (the E.A.C). Before departing the moonfish warn the duo to swim through and not over a trench that they will encounter on the way. When the time comes however, Marlin ignores their advice and he and Dory find themselves surrounded by jellyfish. Although Dory is stung by a smaller jellyfish, Marlin eventually convinces her that they should play a game to get through. To encourage Dory, Marlin says, “first one out of the jellyfish without touching the tentacles wins. Ready set go!” As the two fish hop atop the jellyfish, they continue to sing “Just Keep Swimming”. Although things initially go well, Dory is eventually stung by the jellyfish. As she begins to lose consciousness, Marlin tells her that she’s winning the game, but she needs to stay awake. Unfortunately however Dory passes out, ending the scene.

As the curtain rises, Nemo and Gill appear on stage. Nemo apologizes to fish leader for not being able to jam the fish tank’s filter. Gill tells Nemo not to worry because he has another plan, to escape down the toilet. To encourage Nemo, Gill tells him that his father is probably on his way to get him now. Hearing this however Nemo sings "Not My Dad" in which he laments the fact that his dad is not brave enough to get save him, and he is probably mad at Nemo for disobeying him. 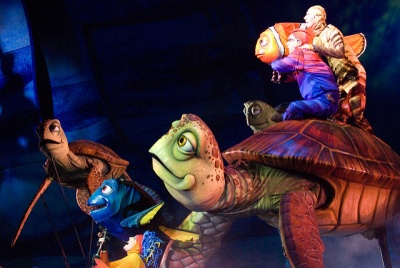 Crush, Marlin, and Dory swimming in the E.A.C. Photo by Josh Hallett

Following "Not my Dad", the scene changes to the E.A.C. where Marlin is riding on Crush’s back. After Crush tells Marlin that he saved Dory by taking on the jellyfish, Marlin states that he has to get to the EAC to save Nemo. Hearing this, Crush begins to sing "Go with the Flow". During the song he explains to Marlin that he has to relax. As an example of his philosophy, Crush points out his young son Squirt, who traveled from the beach to the ocean by himself after being born. Hearing Crush's advice and seeing Squirt fall out of the current and then find his way back, Marlin begins to rethink his over protectiveness. At the end of the song, Crush tells Marlin that the "exit" for Sydney is coming up. Before departing however, Marlin asks Crush how old he is (something that Nemo had asked Marlin at the beginning of the show) after Crush responds that he is “150 and still young”, the scene ends.

The next scene depicts various marine wildlife gossiping about Marlin's adventure. Hearing these stories, Nigel reports to Nemo what has happened. Hearing this news, Nemo signs “That's My Dad (Reprise)”, in which he lauds his father for his bravery.

At the end of the song, a fish net dives into the tank and scoops Nemo up. Much to the horror of the rest of the Tank Gang, Nemo is put in a plastic bag and given to Darla. At this point Nigel arrives, having brought Marlin and Dory with him. Unfortunately however, Nemo appears to go belly up inside Darla's plastic bag. Thinking his son for dead, Marlin thanks Dory and begins to head home. Fortunately however, Nemo was only pretending to be dead so that he would get flushed down the drain and released. After traveling down the train, Nemo is now reunited with Marlin and Dory. Suddenly however, a school of fish swim up, warning the trio to swim away. Before they can however Dory is captured inside a large net. Despite his father’s fears, Nemo says that he has to save Dory. During the song "We Swim Together (Reprise)", Marlin says he has faith in Nemo, and the young clownfish is able to release Dory and the rest of the fish.

Although it initially seems as if Nemo has been injured, he is actually ok. Marlin then tells Nemo that he met a sea turtle who was 150! Excited by this, Nemo, Marlin and Dory begin their adventure home.

The scene then shifts to Marlin and Nemo back at school. As Nemo prepares to leave with his class, Marlin tells him to have fun and go have an adventure. Marlin, Dory, Mr. Ray, Nemo and his classmates then perform “Finale - The Big Blue World (Reprise)". As the stage dims, the cast members come out and take a bow. This is followed by seagulls saying "mine, mine, mine" and the show ending. 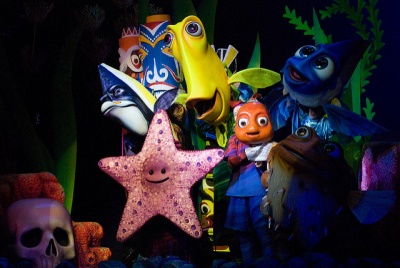 The Tank Gang and Nemo. Photo by Josh Hallett

18. We Swim Together (Reprise)-Performed by: Marlin, Nemo, Dory, Ensemble