Difference between revisions of "Liberty Square"

The concept of Liberty Square began as an expansion idea for Disneyland known as Liberty Street. Spearheaded by Walt Disney, Liberty Street was to be a road that ran parallel to Main Street USA [1]. The new area was to be set during the era of the Revolutionary War and it would have featured colonial architecture and a cobblestone road. In fact, some designs for the street featured 13 buildings, one representing each colony [2]. After walking down Liberty Street, guests would arrive at Liberty Square. In the square, guests would be able to see a blacksmith shop, a glassmaker, a weaver, a print shop, Paul Revere’s silversmith shop and a cabinetmaker [1].

The real draw of Disneyland's Liberty Square however, was to be Liberty Hall (also called Independence Hall in some concept art). This colonial meeting hall was to house two major attractions. The first was to be found The Hall of The Declaration of Independence. Here, guests would see the dramatic story of America’s struggle for independence come to life. The second attraction was to be found in The Hall of American Presidents. This attraction was to be titled One Nation Under God and it would have been a presentation of “the mighty cavalcade of American History" [1]. Also found in Liberty Square would be a recreation of the Liberty Bell and the Liberty Tree, complete with the 13 lanterns [2] .Although initially advertised as opening in 1959, Liberty Street would never reach fruition. Instead much of the company’s resources went to updating Tomorrowland [3]. 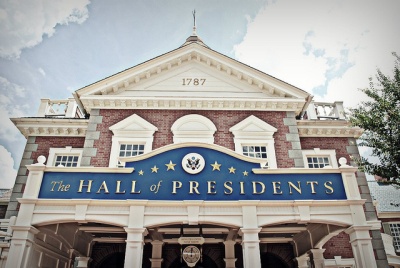 The Hall of Presidents- This show allows guests to see America grow through the eyes of its 43 Presidents. In the finale of the show all 43 presidents will appear on stage together.

The Mike Fink Feel Riverboats- These free floating boats allowed guests to travel the Rivers of America and go around Tom Sawyers Island before returning to Liberty Square.