Although always envisioned as an attraction based on the "Unbirthday" scene from Alice in Wonderland, the original plans for the Mad Tea Party were drastically different from the final result. Early designs for the attraction called guests to enter a "Mad Tea Party" that the Mad Hatter and March Hare were throwing. Guests would enter their tea cups (walking past giant depictions of the Cheshire Cat and the Caterpillar) and spin around a giant Unbirthday table, while the Mad Hatter and March Hare sang the "Very Merry Unbirthday" song. When the Mad Tea Party opened on Disneyland's opening day however, its scale had been drastically reduced. Gone from the attraction were the Mad Hatter, March Hare and the "Unbirthday" party. Instead guests twirled around inside psychedelically colored tea cups.

The Mad Tea Party begins with guests boarding their teacup ride vehicles. Once the attraction starts festive music begins playing, to give guests the feeling that they are at an Unbirthday party. Although each turntable that cups sit on spin at a constant speed, guest can choose the speed of their individual teacup. To do this, guests spin a wheel in the center of each cup (spinning the wheel faster, increases the teacups speed). As the cups spin around, the Dormouse from Alice in Wonderland will pop out of the large teapot in the center of the attraction from time to time. The Mad Tea Party lasts for 1 minute and 30 seconds, before the attraction stops spinning and guests disembark. 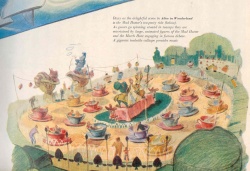