Due to its popularity in Disneyland, a version of the Mad Tea Party was recreated for the opening of Walt Disney World. Opening on October 1, 1971, the attraction was an exact copy of the Disneyland attraction. Shortly after the Mad Tea Party opened however, a large canopy was added to give the ride some cover from the Florida elements [2]. Also added at this time, was a large teapot (housing the Dormouse from the movie Alice in Wonderland) which the teacups now rotated around [2]. After the addition of the canopy, the attraction remained unchanged until 1992 when Japanese lanterns were added [3]. At this time, the Mad Tea Party also received a new color scheme and new music. In 2010, the attraction was once again repainted [4].

The Mad Tea Party begins with guests boarding their teacup ride vehicles. Once the attraction starts, festive music begins playing, to give guests the feeling that they are at an Unbirthday Party. Although each of the turntables that the cups sit on spin at a constant speed, guests can choose the speed of their individual teacup. To do this, they spin a wheel in the center of each cup (spinning the wheel faster, increases the teacups speed). As the cups spin around, the Dormouse from Alice in Wonderland will pop out of the large teapot in the center of the attraction from time to time. The Mad Tea Party lasts for 1 minute and 30 seconds [5], before the attraction stops spinning and guests disembark. 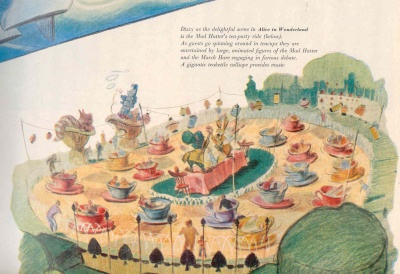