O' Canada was an attraction located within the Canada pavilion in World Showcase.

When working on a film for the Canada pavilion, Disney Imagineers decided that they wanted to use Circle Vision 360 to capture the various Canadian landscapes [1]. The Circle Vision 360 format was chosen, because the scope of the planned scenes (especially the Canadian wilderness) was so broad[1]. It took director Bill Bosce and his filming crew of seven an aggregate of over two years to research, photograph and the film [2]. When Bosce was given the assignment to create a film for the Canada pavilion, he decided to take the perspective of one who had never been to Canada before [2]. In order to get an idea of what to film, Bosce contacted the Canadian Government's Ministry of Tourism, who refereed him to various provincial agencies[2]. Shooting on O' Canada began in May of 1980, and continued on an off for the next two years[2]. When discussing the filming schedule Bosche said:

"There were lots of bits and pieces. We had to schedule our shooting when events were happening and, of course, we were dependent upon weather"[3]

After filming was complete, Bosce had shot over 250,000 feet of film, which was then edited down to an 18 minute movie[1]. Finally, the film opened as O’ Canada with the rest of the Canada pavilion on October 1, 1982.

Following O' Canada's opening in 1982, there were several rumors that the film would be updated. In 1987 the Canadian government wanted Disney to update O'Canada, and negotiations began that called for the country to pay $1 million dollars to create a new film. At this time, the Canadian government boasted about its active involvement in the pavilion. For unknown reasons however, the 1987 update never took place.

In the year 2000, the Canadian Tourism Commission began to lobby for an update of O’ Canada [4]. On August 20, 2007, the original O’ Canada closed [5]. Although Disney did not announce the reason for its closure, when the attraction reopened on September 1, it had in fact received an update [6]. The new version of O' Canada features a combination of old and new footage, as well as a new narration by comedian Martin Short [5]. The attraction's popular theme song, "Canada - You're a Lifetime Journey" was rerecorded by Canadian singer Eva Avila, who won the singing completion Canadian Idol [1]. The current version of O' Canada has been shortened to 14 minutes long [1].

On November 19, 2018, Disney announced that a new film was being created for the Canada pavilion [7]. Subsequently, on August 1, 2019, O'Canada closed. During its subsequent refurbishment, the attraction is expected to get a new film and projection system [8]. 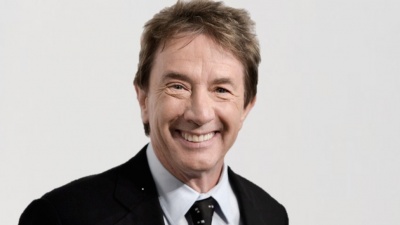 Martin Short now serves as the host of O'Canada

The current version of O' Canada begins in a snowstorm, where the attraction's voice over narrator tells guests that in Canada it snows 24/7, every day of the year. As he is giving his monologue, Martin Short emerges from the snow storm, and yells "Stop the movie!" He then tells the narrator that the audience needs to hear about Canada from a real Canadian- himself. After a brief back and forth, the attraction’s original narrator leaves, claiming that he is, "Going to the France pavilion film, where they appreciate an invisible narrator!".

The next scene in the film takes guests to Niagara Falls, where Short explains that although many people think of the falls as an American attraction, half of the landmark (Horseshoe Falls) is actually located in Canada. Short then takes the audience to see some of Canada’s other landmarks. The tour begins in the Bay of Fundy in New Brunswick. Guests then view the countries west coast, before visiting Vancouver Island's gardens. Here, flowers and other plants are shown blooming. Following the garden scene, Short announces that nearby they can see Cathedral Grove, where some of the trees are 800 years old.

At this point in the film, Short comments that Canadians have a love for the wilderness, and a montage of Canadian animals are shown. Following a scene involving a polar bear, Short has to admit that it does snow in Canada. However, he proceeds to put a positive spin on it by showing skiers and snowboarders performing tricks. Subsequently, curling is featured and Short confesses that he gets a little excited about the sport.

The next scene in the film shows kids (including a “young Marty Short”) playing hockey at the Rideau Canal. Back in the present time, Short is shown in his hockey gear. As the ice below him breaks, he claims "looks like things are starting to warm up". A montage of warm weather sports including, white water rafting, horse racing, baseball, skateboarding and lacrosse is then featured.

The scene then cuts to Nova Scotia, where Short informs the audience that sailing is the passion here. The province is also the home of the legendary Bluenose, which is featured on the back of the Canadian dime. After leaving Nova Scotia, guests see the small towns of Moosejaw and Medicine Hat, before Short tells guests that it's time to view the big cities. Cities shown at this time include:

Following the tour of Canada’s big cities, a montage of famous Canadians is shown. Among the celebrities featured are:

After the montage ends, various average Canadians are shown, followed by more images of the Canadian landscape. At this time, the attraction’s theme song “Canada You're a Lifetime Journey” plays. Martin Short then returns guests to Niagara Falls, where he invites them to visit Canada, by taking a left at the “big silver ball” and then heading north. Short ends his narration by saying that he has to go, because he has a FastPass for Soarin’.

To see the current version of O' Canada click play below: