Stitch's Great Escape! is an attraction located in Tomorrowland.

A third attempted change that Imagineers tried, was adding the voice of two children to the attraction's audience. These kids would then "narrate" the attraction, telling guests what was happening around them. This too did not last longer than a few weeks. [2]

The final change Imagineers made was to the attraction's ending. At the finale of the original version of Stitch's Great Escape, Stitch was seen attacking guests as they rode the Astro Orbiter. This ending was replaced with the current ending, where Stitch attempts to get inside Cinderella Castle. In order to make time for this change, audio of two of Galactic Federation employees (who were at a loss for words) was removed.

Stitch's Great Escape operated for the final time on January 6, 2018. On July 16, 2020, Disney announced that the attraction was permanently closed [5].

On October 7, 2017 a new Stitch meet and greet opened in the queue and first preshow room of Stitch's Great Escape [6]. Named Stitch's Alien Encounter Meet and Greet (a reference to the ExtraTERRORestrial Alien Encounter), the new meet and greet has guests walk through the previous attractions queue, past a waving Sergeant C4703BK2704-90210 (Sarge) and the two animatronic alien prisoners (one of whom was Skippy in the ExtraTERRORestrial Alien Encounter). After entering Stitch's Great Escape's first preshow room, guests meet Stitch before exiting out the way they came.

Stitch’s Great Escape! takes place before the events of the movie Lilo and Stitch. In the attraction, guests have been recruited as guards for the Galactic Federation, and it is their job to keep an eye on Experiment 626 (Stitch).

The preshow begins with guests being recruited by The Grand Councilwoman to be guards for the Galactic Federation. For day one of their orientation, they are then ushered into the next room, where a robot named Sergeant C4703BK2704-90210 (Sarge) briefs them about their duties. He explains that prisoners come in two types, "your level ones, and your level twos". Since it is guest's first day on the job, Sarge explains that they are only ready for Level One prisoners. Level One Prisoners, are "common criminals of the cosmos", an example which is shown in the teleportation tube on Sarge's right. After presenting the Level One Prisoner, Lieutenant Sludge appears on a screen above Sarge. He informs the robot that he is teleporting another Level One Prisoner into the compound. This alien, (who Sarge calls "the doughnut guy") has apparently once again broken into a bakery and eaten all of the doughnuts.

After Sarge laments that he never gets any Level Two Prisoners, the "doughnut prisoner" is transported into a tube on his left. Just as the prisoner enters his tube, Captain Gantu appears on the screen above Sarge to warn him that they are about transport a Level Three Prisoner into the facility. Because of the danger of the new prisoner, Gantu informs Sarge that they are going to have to move to the high security chamber next door. When Sarge is then told that he is going to have to go with the new recruits into the high security chamber, he begins to panic before fainting. Pleakley (from Lilo and Stitch) then tells guests to enter the next room and prepare for duty. 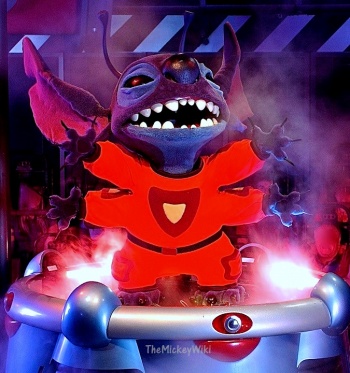 When guests enter the main theater, they are seated in chairs that encircle a large teleportation tube. After being seated, a harness (which is themed to look like a DNA scanner) lowers and straps guests into their seats. After guests have been fastened into their seats, Stitch teleports into the large tube in the center of the room. At first, the prison guards question how something as small and cute as Stitch could possibly be a Level Three Prisoner and after a DNA scan is done, Captain Gantu leaves guests in charge of Stitch while he goes to "straighten all this out" (as he believes that some mistake has been made regarding the danger posed by Stitch). After Gantu exists however, Stitch begins to size up the cannons that are keeping him in check. After spitting at them, Stitch is able to not only cause the cannons to malfunction, but he also disables the power and escapes his tube (by shorting out the system).

With guests now completely in the dark, and Stitch on the loose, Pleakley and a female guard leave to go try and restore the power. Guests are left with instructions to "stay where they are" and "not let the prisoner out of their sight", although they are now alone in the dark with the escaped Stitch.

In the dark room, guests can feel Stitch has he moves around the room. The sound of the alien’s voice moves, as he steals a cell phone, eats someone’s chili dog (which causes him to "belch" on guests) and causes “terror”. Shortly after Stitch's belch, Captain Gantu returns, only to be informed that not only has the power gone out, but Stitch has also escaped. Gantu orders that the aliens turn on the emergency power (which they had apparently forgotten about in the confusion) before ordering that the cannons also be brought back online. Stitch however seems unconcerned by the return of the cannons, as he continues to taunt Gantu. As the cannons try to hit Stitch, he begins to counterattack by spitting at guests, which causes Gantu to deactivate that cannons. Stitch then makes his escape by "jumping" on guests' heads and running around the room, before he returns to his teleportation tube. Although this would seemingly play into Gantu's hands, Stitch is able to "hotwire the controls" and teleport out of the building (and into the Magic Kingdom).

On a screen above guests, Stitch is shown trying (unsuccessfully) to enter Cinderella Castle, where Cinderella quickly realizes that he is not her Prince Charming. At this point, Gantu concedes that there is no more that the guests can do, and he releases them from their harnesses. Guests then exit the attraction into one of two shops, Mickey’s Star Traders or Merchant of Venus.

According to Disney, Lilo and Stitch's original voice actors reprised their roles in Stitch's Great Escape [7].

If you want to see Stich’s Great Escape! click play below: