On November 23, 2010 The Many Adventures of Winnie the Pooh was given a new interactive queue. Sections in the new queue included: Tigger’s Bouncy Place, Rabbit’s Garden, Eeyore’s Gloomy Place and Pooh’s Hunny Hives [8]. At this time, the large tree that serves as Pooh's house was relocated from the recently closed Pooh's Playful Spot and relocated to the entrance to the queue [9]. Almost as soon as the new queue was installed, Disney decided to close the Tigger's bouncy Place portion of the queue due to safety concerns. Although the area was eventually reopened with new bounce pads and a softer surrounding area in January 2011 [10], eventually Disney decided to do away with the pads altogether and in March the area was walled off for refurbishment [11]. That area remained closed until it was repurposed for a Pooh meet and greet. 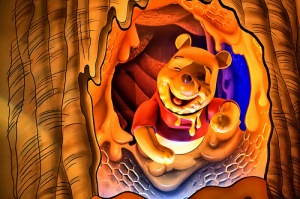