The Magic Kingdom is a theme park located in Walt Disney World. 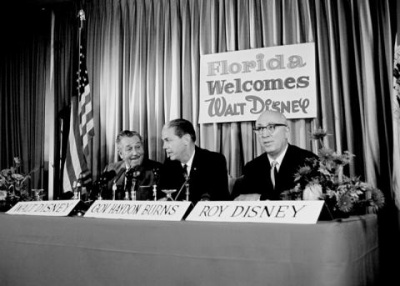 This history of the Magic Kingdom began in 1959, when Walt Disney began to look for a place to build a second theme park [1]. Coming off the success of Disneyland (which had opened in 1955), Walt wanted to bring his next theme park to the East Coast. According to research done by the Disney Company, although 75% of the American population was located east of the Mississippi River, only 5% of Disneyland's visitors came from that region [2]. The success of the Disney attractions at the 1964 World's Fair in New York, showed Walt that Disney could be a huge success in the East Coast market [3]. Also adding to Walt's frustration, was the fact that the area around Disneyland had become rundown by local businesses hoping to capitalize on Disneyland's success. To solve this problem, Walt wanted to have control over much more land than he could in Disneyland. With this goal in mind, Walt began to scout for a new location where he could build a "Disneyland East". One of the original locations Walt considered was St. Louis, where Disney had plans to build "Riverfront Square," a five-story, fully enclosed theme park which would have a St. Louis and New Orleans theme [4]. Despite the fact that Disney developed significant plans for the theme park, negotiations with St. Louis eventually fell through. Although the exact reasons for this falling out are not clear, it is commonly accepted that among the reasons was the fact that Busch family wanted Disney to sell beer in the park, which he refused to do [4].

By 1963 WED Enterprises set their sites of Florida as the location for their "Project X" (later renamed the "Florida Project"). Florida was already the top state in terms of tourism, and the Florida climate would allow the new theme park to be open year round. In November, Walt Disney himself flew over one of the potential sites in Florida, Orlando. Disney decided Orlando was the perfect location for his new park. The well-developed road system including the already planned Interstate 4 and the Florida Turnpike further added to the appeal of the area [5]. After much research WED Enterprises and Walt eventually selected a centrally-located site near Bay Lake for construction of their new park. Lawyer Paul Helliwell and Florida realtor Roy Hawkins were responsible for coordinating the companies' purchases of the Florida land [6]. In order to keep the public from knowing that Disney was buying the land (as this would greatly increase the cost), Disney set up dummy corporations including: Latin American Development and Management, Bay Lake Properties, Tomahawk Properties, Retlaw, M.T. Lott Real Estate, Ayefour Corporation [7] and others to buy the land. All in all, Disney bought 27,443 acres of land from more than 100 property owners. The total coast of the land was nearly 5.5 million (about 200 dollars per acre). After being outed by a reporter for the Orlando Sentinel [8], Walt Disney announced his plans for The Florida Project to the public on November 16, 1965 [9]. 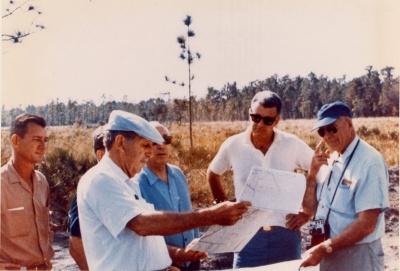 On May 30, 1967, [10] construction began on the Florida Project. Due to the fact that Walt had died in 1966, his brother Roy took charge of the project. Although Walt had died before construction had even started, his influence on the park was apparent. For instance, one of the major problems that Walt had with Disneyland was that guests were exposed to the day to day operations of the parks. Walt told the story that one day in Tomorrowland he saw a cowboy from Frontierland walking by, heading to the costume room. Walt felt that this ruined the magic of the futuristic Tomorrowland and wanted to do better with the Florida Project [11]. A second problem that Walt had hoped to avoid was that guests in Disneyland were exposed to the world outside the park. Walt said he once saw a family leave because they could see that traffic was getting congested, while riding on the Skyway [12]. Because of these issues, it was decided that the first floor of what was now called the “Magic Kingdom” would be a series of tunnels, called utilidoors. Due of Florida's water table, the utilidoors could not be built underground. Instead, Disney Engineers decided to make the utilidoors the first story of the park, with the actual Magic Kingdom the second (meaning that the park itself is actually 14 feet above ground) [13]. The utilidoors allow cast members to move freely throughout the park without being seen by the guests above. With the utilidoors, it only takes cast members about 10 minutes to walk from one side of the park to the other. The utilidoors also allowed the everyday functions of the park to be hidden from guests. Food, garbage and costumes could all be transferred around while keeping the illusion of the lands intact [14]. Besides everyday operations the utilidoors also house the operating systems for the park, as well as offices and cafeterias for the Cast Members [15]. Another upgrade to the Magic Kingdom was the Avac Systems, which were devolved in Sweden. This trash collecting system allows garbage to be suctioned away through a series tubes, to a centralized dumping point. This allows cast members to keep the trash under control and out of the view of the guests [16].

Construction of the Magic Kingdom was overseen by Admiral Joe Fowler, who previously had overseen the construction of Disneyland [17]. The design of the park was principally done by Imagineers Marvin Davis and Dick Irvine, who took their inspiration from Walt's original park [18]. In order to make the park unique however, Disney decided to use Cinderella Castle as the park's icon as opposed to Sleeping Beauty Castle (which Disneyland had) [18]. Imagineer Bill Evans was charged with landscaping the Magic Kingdom [19]. At the time the park was being built, construction of Walt Disney World (as it was now called) became the largest private construction project in the world [18]. With construction lagging behind schedule, in 1971 Disney put Dick Nunis in charge of completing the project. Under his leadership, Disney employees made a final push to the Magic Kingdom completed on time. With hourly workers and even upper management working around the clock [18], eventually the park was ready for opening day- October 1, 1971. 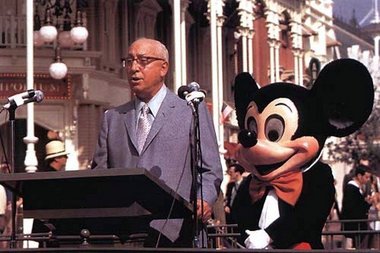 The Magic Kingdom had soft openings starting on Labor Day 1971, with Disney employees, construction workers and local leaders being invited to the park until September 31. On October 1, 1971, The Magic Kingdom opened its gates and welcomed its first guests. 10,000 people showed up that day to visit Disney’s newest park [20]. Unlike Disneyland which had been overwhelmed on its opening day, Walt Disney World’s opening ran smoothly, and any issues were quickly resolved. Before the opening of Disney World, Florida State Troopers issued a warning saying that a potential 300,000 people could show up on opening day [18]. This possibility created a fear that the park was going to be overwhelmed by the number of guests and may have led to the lower than expected attendance . Some pundits began to predict that Disney World would be a failure; however by the end of October 1971, 400,000 people had attended the park [21]. The climax of the grand opening happened between October 23 and October 25, 1971 when the Magic Kingdom was officially dedicated [22]. Roy O Disney, with Mickey Mouse by his side, gave the dedication speech on the 25th:

When the Magic Kingdom opened it consisted of seven lands and a central hub. The lands and attractions that were operational on the park's opening day are listed below.

After the Grand Opening[edit]

The first major expansion to the Magic Kingdom came in 1973 when the Caribbean Plaza expansion of Adventureland took place. Due to high guest demand, Disney decided to construct a version of Disneyland's popular Pirates of the Caribbean attraction in the Magic Kingdom [25]. To do this, Imagineers decided to expanded Adventureland to create a new area to house the attraction. The next major change to the park came in 1975 when four new attractions opened in Tomorrowland. In 1971, Tomorrowland only featured Flight to the Moon, the Circle-Vision 360 Theater, and The Grand Prix Raceway. In order to finish out the land, Disney added the Star Jets, Carousel of Progress, WEDway PeopleMover, and Space Mountain [26]. 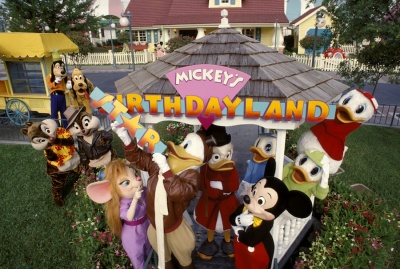 Although originally envisioned as a temporary land, Mickey's Birthdayland would later evolve into Mickey's Starland and then Mickey's Toontown Fair

Although new attractions continued to change the landscape of the park (such as the addition of Big Thunder Mountain in 1982), it was not until 1988 when Mickey's Birthdayland was built, that the Magic Kingdom got a new land. Mickey's Birthdayland was built in celebration of Mickey Mouse's 60th birthday. The new land consisted of the fictional town of Duckburg, and allowed guests to tour Mickey's House, Pluto's Doghouse, and Donald's Boat [27]. The land also featured Grandma Duck's Farm (a petting zoo) and Minnie's Surprise Party, which was a show dedicated to Mickey's birthday [27]. At this time, a train station was built in Mickey's Birthdayland so that the Walt Disney World Railroad would be able to drop guests off in the new area [28]. Although originally intended to be temporary, Mickey’s Birthdayland was so popular with guests that Disney decided to make the land permanent [29], eventually renaming it Mickey's Starland on May 26, 1990 [30]. Minnie's Surprise Party was rethemed, and it became Mickey's Magical TV World. The new show featured characters from the popular Disney Afternoon cartoon shows [31].

In 1996, the once temporary land was once again rethemed. Now called Mickey's Toontown Fair, the new land took place in the fictional Toontown. Toontown was larger than Mickey's Birthdayland, although it did carry over the Mickey's house attraction. Added to Toontown were a new version of Donald's Boat, The Barnstormer at Goofy’s Wiseacre Farm, Minnie's Country House, and the Judges Tent where guests could meet various Disney characters [32]. In 2011 Mickey's Toontown Fair was closed to make way for the Fantasyland Expansion [33].

In 2012 Storybook Circus (a part of the Fantasyland Expansion) opened in the former location of Mickey's Toontown Fair [34]. Included in the new area was the attractions: The Barnstormer Featuring Goofy as the Great Goofini, a relocated Dumbo the Flying Elephant (now featuring a second set of Dumbos), the Casey Jr. Splash 'N' Soak Station and Pete's Silly Sideshow [35].

In December of 2012 the rest of the Fantasyland Expansion (sans the Seven Dwarfs Mine Train) opened to guests. This phase of the expansion included the attractions: Under the Sea: Journey of the Little Mermaid, [[Enchanted Tale
Retrieved from "http://themickeywiki.com/index.php?title=The_Mickey_Wiki:_Your_Walt_Disney_World_Encyclopedia!&oldid=12395"