Kilimanjaro Safaris is an attraction located in the Africa section of Disney's Animal Kingdom.

The concept for Kilimanjaro Safari actually began when Walt Disney started planning Disneyland in the 1950s. Walt originally envisioned the Jungle Cruise with premise that real animals would be featured in the ride. Eventually, experts convinced Walt that real animals would be too unpredictable to use in the attraction and Audio Animatronic animals were used instead [1]. When Disney Imagineers began planning their newest park, Disney's Animal Kingdom in 1989, however, they decided that an attraction using real animals was now a possibility. Taking inspiration from this idea, they designed Kilimanjaro Safaris with the idea that it would be the "E ticket" attraction that the park needed.

Imagineer Joe Rhode oversaw the creation of the Safaris, and in July of 1990 he and other Imagineers went to Kenya and Tanzania to study the wildlife there [1]. After their trip, Imagineers decided that besides just showcasing the animals on the safari, the attraction would also need a story. Disney CEO Michael Eisner demanded that Disney's Animal Kingdom should promote the idea of conservation [1]. To stay clear of any political problems, Imagineers set the Safaris in the fictional village of Harambe (which is Swahili for "working together") [1]. Like real villages in Eastern Africa, Harambe is themed to serve as a gateway for guests into the African Savannah. 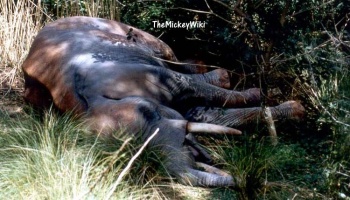 The corpse of Big Red was removed from the attraction prior to opening.

In order to get the environment right for the animals, Disney planters asked for two growing seasons prior to the animals' arrival [1]. With the foliage being planted in the spring of 1996, Disney began collecting trees from all around the country [1]. Furthermore, Imagineers had to determine what animals were going to be showcased in the exhibit. To do this, Imagineers evaluated how active the animals would be, how easily they could be moved backstage, whether they could interact with other animals, and what they would eat.

After the animals were selected, Disney needed to figure out how much space the animals needed and how they could be contained in their area. Moats, water features, electric fences, "ha-has", and wires and chains were placed on the ground in order to keep animals within their area. In order to make the animals more visible to guests on the safari, Disney implemented "tricks" to encourage the animals to stay in certain spots [1]. Hidden food, air condition rocks, cooling and warming waters, and cool breezes are all used to keep animals within view [2]. During Kilimanjaro Safaris' development, Disney also decided that they did not want to acquire the animals for the park from their natural habitats. Instead, they were brought in from other zoos or reputable breeders [2]. Finally, backstage, state of the art animal homes were constructed to shelter the animals when they were not "on stage" [3].

The original story that Imagineers created for Kilimanjaro Safaris, involved guests racing after poachers while trying to rescue a mother and child elephant named Big Red and Little Red [4]. In the original plans for the attraction, guests would be involved in a high speed chase for the last third of the ride. Along the way, they would pass the bloodied corpse of Big Red who was killed by poachers for her tusks. This was done in order to stress the conservation message that Michael Eisner had championed for the park. Unfortunately, Cast Member previews proved that the sight of the dead elephant was too much for kids (and some adults) [4]. After receiving a lot of complaints, Imagineers removed the elephant and instead implied Big Red's death in the script. The elephant corpse was no longer a part of the attraction when it opened on April 22, 1998 [4]. 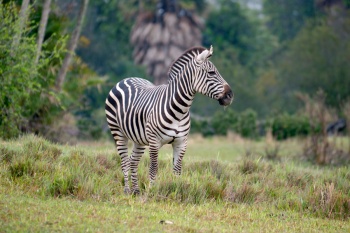 Zebras were added to the Kilimanjaro Safaris in 2012

During the holiday season of 1998, Disney decided to allow the safaris to remain open at night [5]. The "new" attraction, known as Kilimanjaro Night Safaris featured animal sounds, reflectors meant to represent animal eyes, and an African dance troupe who performed around a bonfire [5]. Following the holiday season however, it was decided that the attraction would be discontinued due to guest complaints about not being able to see the animals, as well as the additional costs of keeping the attraction open. [5] 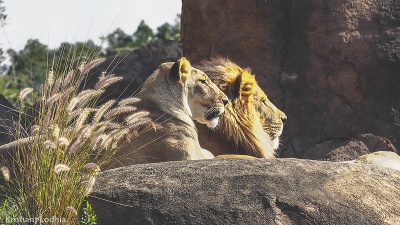 Lions resting on the Kilimanjaro Safaris. Photo by elpinto007

After boarding their safari vehicle called Simba One, guests embark into the African wilderness. The first scene in the Safari is the Ukungu Forest. Here, guests can see the bongo and the okapi, two animals which are difficult to find in the wild. As the tour continues on, guests come across a watering hole, where black rhinoceros can be found. Further ahead, guests pass by the Safari River where two water holes can be seen. The first hole features a couple of male hippopotami, whereas the female hippos populate the second hole. As the Simba One passes by the second pool, the vehicle tips towards the water, showcasing the rough terrain that guests are riding on. Also located on the Safari River are crocodiles, which guests can see before the pass over the Senkell Bridge and enter the Ndege Hills.

On top of the hills, guests are shown the baobab or "upside-down tree". These trees produce fruit which is known as monkey bread, and their large trunks are used to store water. As guests descend down the Ndege Hills, they can see the African Savannah in front of them. The Savannah features the Thompson Gazelle and the Ankole cattle. Further on, guests see giraffes and Mandrills, one of the largest species of monkeys in the world. Other animals that can be found in the Savannah include elephants, ostriches, white rhinoceros, cheetahs and finally lions. After passing the lions, guests can see the attraction’s newest animal the Plains Zebra, before arriving at the unloading area.

The original ending of Kilimanjaro Safaris took guests on a high speed chase after poachers. As guests progressed to the elephant section of the safari, Mr. Wilson (the Safari's warden) warned guests that poachers may be present. When guests reached the back gate of the safari, they could see that it had apparently been broken into, and that the elephant Big Red and her son Little Red were missing. As the driver of the vehicle chased after the poachers, guests were actually shot at by the villains, and it became clear that Big Red had been killed. After narrowly avoiding erupting geysers, guests found out that the poachers had been captured by the preserves' authorities. Here, guests could finally see Little Red, back in the protection of the preserve. 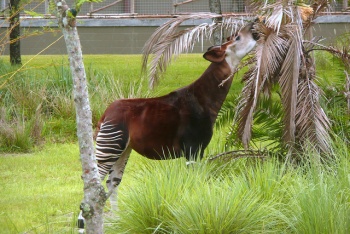 An Okapi eating on Kilimanjaro Safaris.

Animals that can be found on Kilimanjaro Safaris include: