From The Mickey Wiki: Your Walt Disney World Encyclopedia!
(Redirected from World of Motion)
Jump to: navigation, search

Test Track is a pavilion located in World Discovery within Epcot. The pavilion was known as World of Motion from 1982-1996. For the attraction located within the pavilion see Test Track (Attraction)

A chance meeting in 1976 between General Motor's head of design, Bill Mitchell, and Imagineer Bob Gurr led to GM and Disney to enter negotiations for GM to sponsor the Transportation pavilion[1]. Remembering the success that Ford had in partnering with Disney at the 1964 World's Fair, GM agreed to 15 year contract, becoming the first of EPCOT Center's many sponsors [2].

By 1978 the Transportation pavilion began to take shape [3]. In this iteration of the pavilion, guests would enter the building into a large atrium which was to feature a series of interactive exhibits. Upstairs, the pavilion's major attraction, was to be a dark ride that took a historical look at the evolution of transportation[3]. This "history of transportation attraction" was designed to end in a model city of the future (a concept borrowed from Ford's Magic Skyway pavilion at the 64 World's Fair) [3]. The attraction was initially created by Imagineer Claude Coats, however due to GM's preference for a more lighthearted tone, Imagineers Marc Davis and Ward Kimball (whose career had primarily been in animation) were brought onto the project [1]. A secondary attraction for the pavilion that was to feature an outside track, was scrapped, as plans for the pavilion continued to develop[3]. Another aspect of the pavilion that was eventually removed, was the idea that the omnimover attraction would weave in and out of the pavilion [4]. Finally, the space cleared on the pavilion's first floor to house the preshow exhibits was never used [5].

The Transportation pavilion was eventually named the World of Motion and construction began in 1979 [1]. The pavilion itself was designed to look like a large wheel (albeit one that was 65ft high and 320 feet across), with guests entering through a “wedge” that had been removed from it [3]. On October 1, 1982, the World of Motion pavilion opened with the rest of EPCOT Center. When the pavilion opened it featured the aforementioned "history of transportation" attraction (also named World of Motion) and the TransCenter, a postshow area that featured interactive exhibits [3]. Although there were minor changes to the TransCenter, from 1982 until 1992 World of Motion remained essentially unchanged [3]. 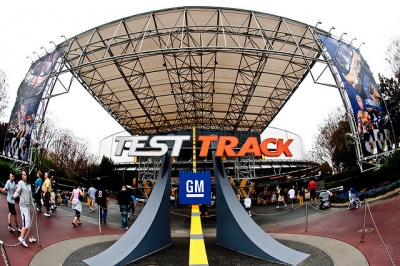 The Test Track pavilion as it looked from 1998-2012. Photo by Josh Hallett

With instructions from GM to narrow the focus of the new attraction to automobiles, Walt Disney Imagineering decided to revisit one of the original ideas for the World of Motion pavilion. In 1976, Imagineers had visited GM's testing ground in Milford, Michigan, where they got to see the process that GM's prototype cars went through when they were tested[3]. With this in mind, Imagineers had originally planned on creating a secondary attraction for World of Motion that would have had guests testing futuristic automobiles[3]. Taking inspiration from the General Motors proving grounds, Imagineering pitched the idea of Test Track, an "E-ticket" attraction that would take guests through the rigorous testing that GM cars are put through[3].

With plans for Test Track underway, on January 2, 1996, the World of Motion pavilion closed for renovations [3]. Subsequently, on February 13, the GM Preview Center opened in front of the closed pavilion. The GM Preview Center featured concept art for Test Track, and a large mural painted by Catherine Feff (which was installed in order to hide the pavilion during its construction) [7]. Due to a series of delays related to both Test Track's ride system and ride vehicles, the attraction was not ready for its May 1997 opening [7]. Instead, in 1998 the GM Preview Center was updated to feature new attraction artwork. Next, in late 1998, the Preview Center was removed and the attraction soft opened to guests on December 19, 1998 [7]. Despite the fact that both guests and Cast Members were able to ride Test Track in December 1998, due to constant ride breakdowns, Test Track's Grand Opening was pushed back to March 1999 [7]. Finally, after three years of construction, Test Track was officially dedicated on March 17, 1999 [7].

On January 6, 2012 Disney announced that Test Track would be closing for a major refurbishment in April of that year[8]. On April 15, 2012, the original Test Track closed [9]. At this time, the attraction's aesthetics and theming completely changed, despite the fact that the track and ride vehicles remained the same. As opposed to showing guests how cars were made, the new version of Test Track focused on the testing of cars. In Test Track 2.0, guests design their own ride vehicle in the queue before testing its capability, efficiency, responsiveness, and power on the attraction itself. Following the attraction, guests now receive a card with their car information on it, which they can use to play various interactive games.

On December 6, 2012 Test Track reopened to guests [10]. Since the 2012 refurbishment, Test Track has been sponsored by General Motors' Chevrolet as opposed to the parent company GM [11]. 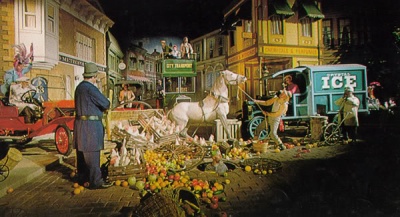 A scene from the World of Motion attraction.

Test Track- This high speed attraction lets guests design, and then test, their own SimCar. Reaching a top speed of 65 mph, Test Track is the fastest attraction in Epcot.

World of Motion- This dark ride attraction took guests through 30 different scenes depicting the history of transportation. The ride concluded by showing guests the future of transportation in CenterCore- a futuristic metropolis.