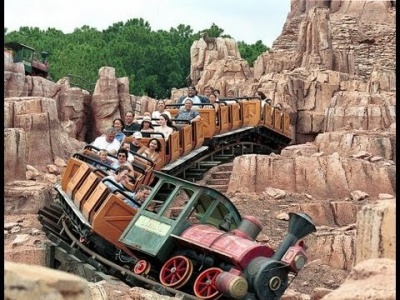 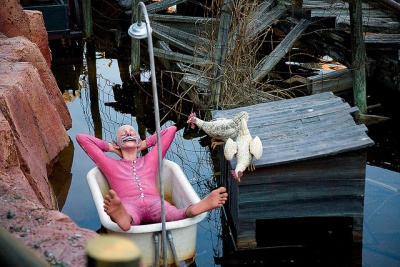 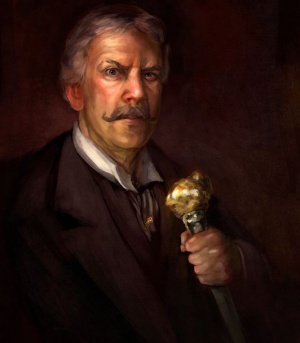 "In the Disneyland version, gold was discovered in Big Thunder country in the 1850s, shortly after the Gold Rush began near John A. Sutter's Mill in California, leading to the formation of the BTM Mining Company. But the locals believed Big Thunder Mountain and the land around it to be sacred, and a protective supernatural force dwelt deep within the mountain to protect it from anyone who might deface it in the pursuit of profit. At first, the mining operation went along without incident, but as the miners began using explosives to blast deeper and deeper into the unforgiving rock and laying tracks for the mine train they'd use to retrieve its golden bounty, the mountain's ancient fury was unleashed. Strange noises emanated from a newly opened mineshaft. The spirits of long-dead miners could be heard tapping on the boarded walls of abandoned tunnels. Cave-ins became common occurrences. And then the narrow-gauge engines began rolling out of the station with no human hands at the controls. Entire trains, most times packed with unsuspecting passengers, would race driverless, at breakneck speed, along the spiraling steel and wooden track. The miners began to concede that perhaps the locals were right all along. Maybe the mountain --and their mine -- was cursed. They abandoned their posts, the BTM Mining Company went bust, and soon Big Thunder became just another ghost town dotting the Old West." [21]