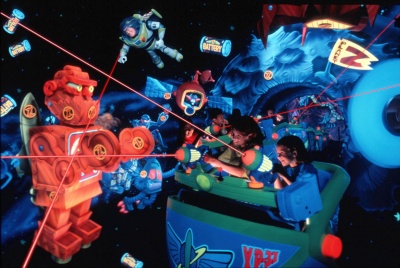 After getting their instructions, guests board their XP-37 Space Cruisers (the ride vehichles) and head off to find Zurg. Each vehicle has two space lasers but can fit three people. All the vehicles run as part of an Omnimover system. There are dozens to potentially hundreds of targets in each room. Shooting the targets give guests points, with the objective of the attraction being to get as many points as possible. There are four different shapes of targets, round (100 points), square (1,000 points), diamond (5,000 points) and triangle (10,000 points).