The restaurant that is today known as Cinderella’s Royal Table opened with the rest of the Magic Kingdom on October 1, 1971 as “King Stefan’s Banquet Hall” [1]. When naming the dining establishment, Imagineers wanted a name that would suit the regal atmosphere that was being created. Due to the fact that Cinderella’s father is not mentioned in the film, Imagineers used some creative licensing and named the restaurant after Sleeping Beauty’s father King Stefan [2]. This was done despite the fact that the eatery was housed inside Cinderella Castle. The only real major change to occur in King Stefan’s Banquet Hall came in 1996 when the restaurant began offering a character breakfast, which allowed guests to meet various princesses while they ate [3].

The backstory to King Stefan’s Banquet Hall could be found on the front of the restaurant’s menu. See below to read it! 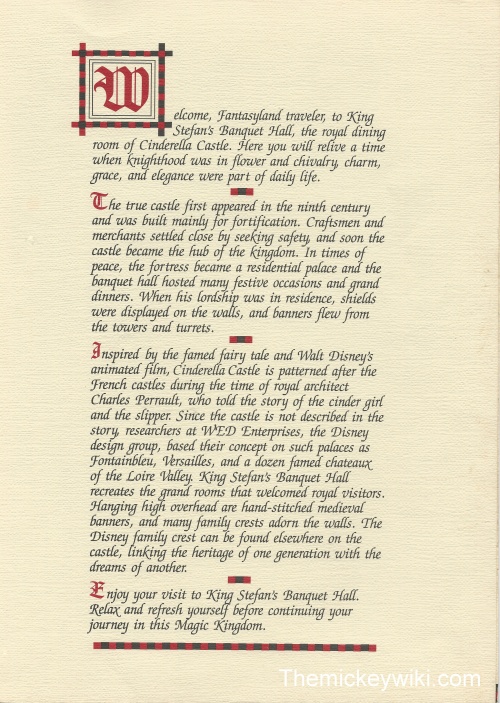 On April 28, 1997 Disney changed the name of King Stefan’s Banquet Hall to (the more fitting) Cinderella’s Royal Table [4]. The next change to the restaurant came in 2002 when guests needed to provide credit card information when booking the restaurants popular “Once Upon a Time” character breakfast [5]. In 2005, Cinderella’s Royal Table became a “character lunch” location. Like the Once Upon a Time Breakfast, guests could now meet their favorite princesses during lunch [6]. Beginning on February 1, 2006, dinner at Cinderella’s Royal Table became “fixed-price, set meat” [7] [8]. At this time, the Fairy Godmother also began appearing at dinner time. As a part of the new dinner format, guests were also given an exclusive lithograph for no additional charge [7] [9]. On January 1, 2007 however, guests no longer received a lithograph when dining at Cinderella's Royal Table. Instead children ages 3 to 9 were given a Princess Wand for girls and a Prince Sword for boys [10].