The Kali River Rapids is an attraction located in Asia within Disney's Animal Kingdom.

The original plans for the Asia expansion in Animal Kingdom called for an Asian safari ride to counterbalance the Kilimanjaro Safaris in Africa [1]. In order to differentiate the attraction however, Imagineers decided to make the ride a rafting safari. The attraction, which was called the Tiger Rapids Run (or Tiger River Run[2]), would have been similar to Walt Disney's original concept for the Jungle Cruise. Guests would have boarded large yellow rafts which would be held together in groups [1]. As guests floated through the Asian jungles, they would observe animals such as the Indian Rhinoceros, the Asian Elephant, the Asian Antelope and various other creatures [2]. Other scenes on the attraction were to include an Indian palace, a scene depicting vicious deforestation, and the finale which called for the rafts to separate from each other, before sending guests down thrilling white water rapids [1].

During the planning of the Tiger Rapid Run, Imagineers decided that the screams of guests going to down the river rapids would frighten the animals showcased in the attraction [2]. Furthermore they also believed that guests would be moving too fast on the rapids to really observe the animals. Because of these problems, Imagineers decided to cut the live animal portion out of the attraction [2]. The Tiger Rapid Run was then renamed the Kali River Rapids (after the Hindu goddess Kali, who represents the destructive forces of nature [3]) and the focus of the ride was shifted to showcase the dangers of deforestation [3]. The Kali River Rapids opened with the rest of Asia on March 18, 1999 [4].

The Kali River Rapids is set inside the fictional Anandapur Township, which lies on the Chakranadi River. Signs throughout Anandapur warn that illegal loggers are damaging the environment with slash and burn logging techniques. Because of these environmental concerns, Manisha Gurung (a local woman) started the Kali Rapids Expeditions. Manisha's goal by starting the attraction was to show that there were more eco-friendly ways of creating income for the village.

The entrance to the Kali River Rapids is located just next to the home of its owner Manisha Gurung. After passing by the house, guests follow a path surrounded by bamboo. Continuing on guests stroll by many eroding religious artifacts ,before entering the Tiger Temple. Here, guests can see a wall covered with ribbon, as well as bells hanging from the rafters. Each ribbon on the wall represents a prayer made, whereas each bell represents a prayer answered. As guests enter the temple, they may notice that there does not seem to be any particular religion evoked. Instead, Imagineers designed the temple to honor wildlife and animals instead of a particular deity. Throughout the temple, guests can see various religious artifacts and even a large tiger statue. Before venturing deeper into the temple; guests enter a room which holds statues of King Cobras. These are there to protect the Chakranadi River from being harmed by humanity.

The next room in the temple is known as the Painted Pavilion. Here, the Jataka Tales (the stories of the previous lives of the Buddha) have been beautifully painted on the ceiling. After passing through the Painted Pavilion, guests exit the Tiger Temple and enter Mr. Panika's Shop, which is located directly adjacent to the building. Inside the shop, guests can browse through Mr. Panika's huge inventory of (mostly animal related) merchandise. Signs throughout the shop suggest that Mr. Panika is fairly desperate to make sales. Next to the store, guests can see a small bird market, which doesn't have any real birds in it. Across from the market sits an uninhabited aviary. 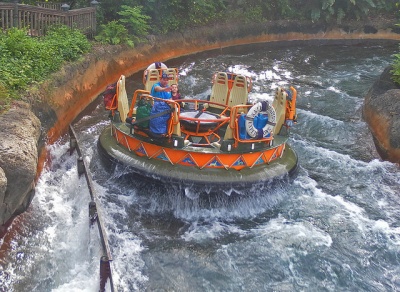 After meandering their way through the shop, guests finally enter Kali Rapids Expeditions. On the overhead speakers, they can hear Manisha Gurung explain why she started her business. The office itself is littered with old appliances such as a telephone, typewriter, answering machine and film cameras. A slide projector in the room also gives guests a glimpse of the some of the sights that they will see on the rapids. Furthermore, inside the office, guests can find a map of Anandapur and a raft position chart. As guests enter the second room of the office, they hear someone over the radio warn Manisha that illegal logging is taking place along the river, and that the raft rides should stop. Unfortunately, since Manisha is nowhere to be found, the rafting expeditions continue on. Inside this room, guests can also see stylized painting of many of the scenes that they will soon see on the Kali River Rapids.

After making their way through the queue, guests load into large twelve-seat rafts. As each raft leaves the dock, it begins to go up a incline. On either side of the river, stone animal guardians gaze upon guests as they ascend. When the rafts reach the area on top of the incline (known as Tiger Bay) geysers begin to erupt all around them before the river takes a 90 degree turn and winds into a forest. While the forest at first seems peaceful, guests soon find themselves passing by an illegal logging operation. Here, guests both hear and smell the forest burning around them, as piles of wood burn on the banks. Across the river, guests also see one of the logging trucks sliding down the bank and into the river.

After passing by the loggers, guests begin to plummet down a 30 foot waterfall. After surviving the fall, guests continue their tour through the tranquil forest. the rafts then pass through a small cave, where the statues of three gods fill the river with water from their pots. As guests pass by the gods, they are splashed with the water coming from the jugs. Due to the Chakrandi's circular nature, guests then find themselves back at the Tiger Temple. Before reaching the dock, the rafts pass beneath a bridge, where two stone elephants shoot water onto the raft. The elephants are actually controlled by guests pushing a button on the bridge above. After passing by a small spirit house (which was built to comfort tormented spirits so that they will leave the residence of nearby homes alone) guests come back to the loading dock.