The first sight that guests can see from the Liberty Belle is Frontierland. Sam comments that Frontierland was once just a boom town, and although there are still a few trappers, prospectors and Indians, the town is well on its way to becoming a big city. Sam also mentions that the large peak in the town is known as Chick-A-Pin Hill. It seems that the dam atop the hill has burst, and people have begun to ride carved out logs over the ledge. Continuing on, the boat passes Sam's "old stomping ground", Tom Sawyer's Island. Sam says that the only way to get to the island is by raft, before pointing out parts of the island including: Muff Potters Pond, Harper's Mill, Tom's Landing, and Huck's Landing (it seems that Tom, Huck and Sam used to explore the island quite a bit while looking for adventure). 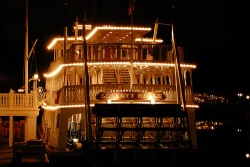 A close-ups of the Liberty Belle at night.
.