Difference between revisions of "Mexico"

A Mexican pavilion was planned for World Showcase since early on in the area’s development. The planned pavilion was to include two restaurants, as well as an attraction named “Las Tres Culturas de Mexico”. Although well developed, the plans for the Mexico’s boat ride were initially going to be pushed back to EPCOT Center’s “Phase Two”, and be built at a later date. At this point in the pavilion’s development, the load area and lagoon were to be constructed, with the idea that the ride itself would be built at a later date. These plans changed however when Germany’s planned Rhine River Cruise attraction was cancelled along with the Japan pavilion's planned attraction. Due to the fact that plans for an Equestrian Africa pavilion were also shelved, Disney had a capacity issue. With no other rides in World Showcase, the area would not have enough attractions to meet its expected guest capacity. As a remedy for this situation, Disney decided to make Las Tres Culturas de Mexico an opening day attraction, changing the attraction’s name to El Rio del Tiempo. In order to complete the attraction (and pavilion) on time, the rides length was shortened by 40% and moved completely inside.

Despite the late starting point of the project, the Mexico pavilion opened with the rest of World Showcase on October 1, 1982. When the pavilion was complete, it consisted of two restaurants, two shops, and one attraction. The centerpiece of the pavilion is a large Mesoamerican pyramid, which was based on designs from the 3rd century AD. The interior of the pyramid was designed to look like a Mexican village (based on Taxco de Alarcón) at twilight. Besides initially housing El Rio Del Tiempo, the Mesoamerican pyramid also housed the San Angel Inn restaurant, which was designed based on a restaurant in Mexico City (with the same name), that opened in 1692. Also within the pyramid were various shops and stands in the Festival Marketplace.

The Festival Marketplace inside the Mexico pavilion. Photo Credit: Harshlight.
Outside of the pyramid is the Mexico pavilion’s lakeside restaurant- Cantina de San Ángel. Nearby, guests can also now meet Donald Duck in his Mexican outfit.

Following its opening in 1982, for a number of years the Mexico Pavilion saw a relativity small number of changes. Throughout its history, the shopping stalls located within the pyramid have changed, and more lights were added to the marketplace. The most substantial change to the pavilion came on January 2, 2007 when Mexico's only attraction El Rio Del Tiempo closed. The attraction was updated and renamed The Gran Fiesta Tour Starring The Three Caballeros. On the Gran Fiesta Tour, guests travel through many of the same scenes as El Rio del Tiempo, however they now feature HD screens which allow guests to follow José Carioca and Panchito Pistoles (from the 1944 Disney movie The Three Caballeros) as they look around Mexico for Donald Duck.

El Rio Del Tiempo- On this indoor boat ride, guests could take a relaxing tour to see both the history and the diverse culture of Mexico. El Rio Del Tiempo opened with the rest of the pavilion on October 1, 1982 and it closed on January 2, 2007. El Rio Del Tiempo was replaced by the Gran Fiesta Tour Starring The Three Caballeros, which uses many of the same scenes as its predecessor.

San Angel Inn- Located inside of Mexico's Mesoamerican pyramid, the San Angel Inn is a table service restaurant. From their table (which is set in eternal twilight) guests can see parts of the Gran Fiesta Tour Starring The Three Caballeros. 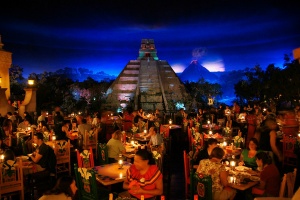 The San Angel Inn is set in eternal twilight.

La Cava del Tequila- A tequila bar where guests can talk to “tequila connoisseurs" as they try various tequilas, margaritas, and Mexican appetizers.

Mariachi Cobre- This authentic mariachi band can often be found playing outside in the Mexico pavilion.

knowledge, and is represented by the serpent heads which are found on the pyramid’s exterior.