Monsters, Inc. Laugh Floor is an attraction in Tomorrowland.

The Monsters, Inc. Laugh Floor was constructed as a replacement for the Circle-Vision 360 film "The Timekeeper". The show was created to showcase "digital puppetry", a new technology that Disney helped develop as a part of its "Living Character Initiative". By using this new technology, Disney was able to create a show that allowed for the Monsters on the screen to interact with the audience (a technique that had previously been used in Turtle Talk with Crush at Epcot). [1]

Following Disney’s announcement of the new Monsters, Inc. attraction in 2006, the former Timekeeper theater was repurposed for the new show. While much of the theater was redone, remnants of the Timekeeper can still be found. For example, in the waiting area, guests can still see the bubbling tubes that were once located in the Timekeeper’s preshow area. Likewise, in the main theater, the 9 screens used in the former show are still there (albeit now covered). [2] 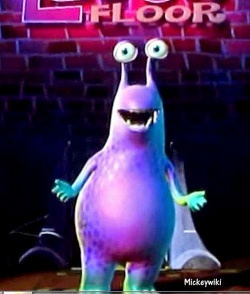 Guests begin their trip to Monstropolis by entering the Tomorrowland Expo Center. Once inside the attraction’s waiting room, Mike Wazowski appears on television screens to explain how the club got its start.

According to the short film, the attraction takes place after the events in Monsters, Inc. and Monstropolis is now running on clean and safe "laugh power" instead of fear. The new energy works well, but there is currently not enough laughter to fuel Monstropolis. To solve this problem, Mike Wazowski suggested that they open a Laugh Club. In order to get to the club, humans are temporarily transported to Monstropolis via special doors in Tomorrowland. In short, the residents of Monstropolis are counting on the laughter from the club to fuel their city. After the video is shown, guests watch a commercial for Monsters University before they are ushered inside the Laugh Club to their seats.

While guests are waiting in line for the attraction they have the opportunity to submit jokes for the monsters to use in the show. A handful of these submitted jokes are usually chosen.

As guests enter the main theater, some individuals are highlighted by the attraction’s cameras and given humorous captions (i.e. "will buy everyone a churro"). After everyone has been seated, Roz (from the movie Monsters, Inc.) appears on the theater’s left screen and explains to the audience how laugh power works.

“See that giant canister, that's where we collect your laughter. The more you laugh, the more power we collect. The less you laugh... well... we may not have enough power to open to the exit doors"

After Roz is finished, the MC (Monster of Ceremonies) Mike Wazowski appears on the center screen. He introduces himself as "Wazowski with one eye", and then begins to tell jokes about Roz. As Mike is telling the jokes about elderly monster; she appears again on the left screen, predictably unamused. Roz tells Mike that he better "fill the can this time, or else." When Mike retorts with "or else what?" she pushes a button which opens a trap door below. Although Mike can be heard crashing below, he reappears on the right screen.

While Mike is in the processes of making jokes about Roz, he informs guests that the phrase, "you stink" is a compliment in the monster world. When he says this, an adult male appears on screen. Whoever is chosen at this time is known as "that guy" for the remainder of the show. Subsequent monsters will make jokes with "that guy" as the punchline. At the end of the show the guest chosen as “that guy” receives an “I was that guy” sticker. Following the end of his introduction, Mike introduces the Laugh Floor’s first act “Mac and Jeeves”.

Mac and Jeeves performing in the Monsters, Inc. Laugh Floor.

(AUTHORS NOTE: Due to the spontaneous nature of the Monsters, Inc. Laugh Floor the following section is a description of a possible routine that Mac and Jeeves could perform.)

The first act in the Monsters, Inc. Laugh Floor is a two headed, yellow monster named Mac and Jeeves (though the monster can go by other names depending on the cast member performing). Mac, the smaller of the two heads, boasts that he is a master of human world geography and that he knows every capital in the world. Jeeves is skeptical, so to prove his knowledge Mac selects a human audience member to name any country. After they do, Mac's answer is usually a humorous side-step of the question, such as saying the capital of Canada is "C". Following this bit, a large map descends from behind Mac and Jeeves, and they ask the audience to raise their hands if "you know where you live". After a chosen guest names their hometown, Mac will give a completely wrong (albeit humorous) description of the location. An example of this routine is:

Jeeves: "Humans put your hands high in the air if you know where you live."

(The audience camera then picks a guest out to answer the question.)

Mac: "Venezuela is a tiny Arctic country located in the middle of the North Arctic Ocean, famous for ski resorts and the Eiffel Tower!"

After repeating this routine with a couple of guests, Mac and Jeeves then decide to recreate the story of Monsters, Inc. using guests from the audience. Different audience members are selected to portray characters from the movie, and they are given silly facial expressions to make. After all of the characters have been selected, Mac and Jeeves retell the story very quickly. In order to keep up with the duo, the selected guests have to make the expressions fast. Finally Roz pushes the trap door button again, abruptly ending the duo’s routine and setting the stage the second act.

(AUTHORS NOTE: Due to the spontaneous nature of the Monsters, Inc. Laugh Floor the following section is a description of a possible routine that Buddy Boil could perform.)

Following Mac and Jeeves a purple monster named Buddy Boil takes the stage. The monster claims that he is a mind reader and he asks a random audience member to think of a number. Buddy then tells the volunteer to say the number out loud, closing his eyes - not his ears - so that he will not hear it. The monster then tells the number to the rest of the group. Everyone knows he can hear the number so when Buddy guesses it right and looks surprised, the audience usually laughs. At this point Roz clicks the button, which triggers a trap door below Buddy. Sometimes after falling Buddy humorously asks the same person to pick another number and he repeats the same shtick. 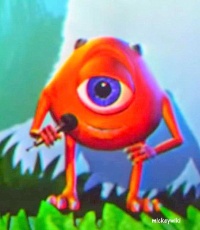 (AUTHORS NOTE: Due to the spontaneous nature of the Monsters, Inc. Laugh Floor the following section is a description of a possible routine that Marty Wazowski could perform.)

The final act of the Laugh Floor is none other than Mike's nephew Marty. Marty looks like a smaller, orange version of Mike and his act is pretty much a standup routine. Marty starts out with a monologue. His first couple jokes usually involve his mother ("She really does have eyes on the back of her head") or some kind of pun ("I have a test tomorrow but I'm not worried...It's an eye exam!"). After he has finished his monologue, Marty reads some of the jokes that guests sent in. He reads three or four of those before going back to his own jokes. The final jokes of his routine frequently require some participation. Marty usually calls on young children to help him with these final jokes. Following the release of Monsters University, Marty Wazowski performs in front of a Monsters University gate.

After Marty finishes his act, Mike comes back on stage. At this point the canister located to the right of the stage has been filled, and the monster celebrates. When Mike asks Roz what she thinks of the fact that he succeeded in filling the can, Roz replies "Well I guess I have to promote the one responsible". Although Mike believes Roz is talking about him, the camera shows who the cranky monster was actually talking about... "that guy!". After this final joke, Mike tells the audience that the show is over, and guests are dismissed.

Even though the attraction is different every time, to see an example the Monsters, Inc. Laugh Floor click play below: