Under the Sea: Journey of the Little Mermaid

Under the Sea: Journey of the Little Mermaid is an attraction in Fantasyland

Created by Imagineer Tony Baxter, this unbuilt Little Mermaid dark ride would use a ride system similar to Peter Pan's Flight in order to allow guests to "dive" in and out of the water [2] . Instead of following the story of the Little Mermaid chronologically, Tony Baxter's Little Mermaid attraction was to immerse guests in the best scenes from the movie. According to Baxter:

“Our attractions are more about the emotion and environments that you come through and I just didn’t want to take the good with the bad just because that is what you saw in the theater. We set the ride up by showing you two people that belong in two different worlds and they want to be together. The first major scene was "Under the Sea" as it validates the notion that we are beneath the surface in their world and this is contrasted by the villainy of Ursula in her dark grotto. Ultimately we needed to be honest to the emotions and feelings of the story rather than just laying it all out again" [2]

Tony Baxter's Little Mermaid attraction would begin with guests passing a shipwreck before arriving at Ariel, who was looking longingly at the human world. The mermaid then claimed that "someday I'll be a part of that world”. After passing by Prince Eric's boat, Sebastian would tell Ariel that life is better under the sea. At this point the attraction's ride vehicles would dive under water where they would witness Sebastian and his friends performing the song "Under the Sea".

Continuing on, guests would pass by Ursula's two minion eels, before entering the sea witch's lair. Here, Ursula and Ariel would make a deal that allowed Ariel to turn into a human in exchange for her voice. As a part of the deal, if the princess was not able to get Prince Eric to kiss her, she would become beholden to Ursula. As a menacing instrumental version of “Kiss the Girl” and “Poor Unfortunate Souls” played in the background guests would emerge from underwater, where they would find themselves in the middle of the battle between Ursula, King Trident and Prince Eric. After the sea witch was defeated, guests would then see Scuttle who would ask Flounder "any kissing?" At this point in the attraction guests would enter the "Kiss the Girl" scene from the film. Here, Prince Eric and Ariel were serenaded by Sebastian and other marine life. Finally, after passing by the now human Ariel and Prince Eric waving from their boat, guests would enter the unloading area.

One of the special features on the Little Mermaid Platinum Edition DVD release was a simulated ride-through Tony Baxter’s unbuilt Little Mermaid dark ride. Click play below to experience the attraction.

Creation in Disney’s California Adventure and The Magic Kingdom 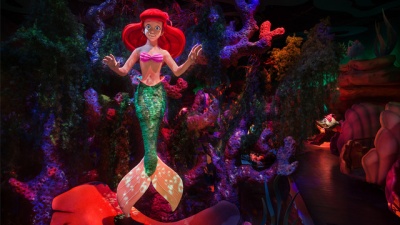 Ariel in Under the Sea: Journey of the Little Mermaid. Photo Credit: Disney.

On October 17, 2007 Disney announced that a new Little Mermaid dark ride attraction would be built as a part of the refurbishment of Paradise Pier in Disney's California Adventure [3]. When designing the new ride, Imagineers built a 1/4 inch scale model and then a 1 inch sale model of the attraction so that they could "ride" through it [4]. On June 3, 2011 the attraction opened to guests as The Little Mermaid- Ariel's Undersea Adventure [5]. This dark ride attraction took guests through the story of the Little Mermaid and featured the songs "Poor Unfortunate Souls", "Kiss the Girl", "Under the Sea" and "Part of Your World".

Similarly, at the D23 Convention, in 2009 Disney unveiled its plans for an expansion of the Magic Kingdom's Fantasyland. As part of this expansion, Disney announced that a Little Mermaid attraction would be constructed [6]. Although the concept art initially released for the Magic Kingdom version of the attraction looked substantially different than the attraction in Disney’s California Adventure, the two attractions ended up being essentially the same (although The Magic Kingdom’s version has a much larger facade and a more extensive and interactive queue) [7] [8]. Under the Sea: Journey of the Little Mermaid opened on December 6, 2012 as part of the Fantasyland Expansion [9].

On February 2, 2015 Under the Sea: Journey of the Little Mermaid was closed for a month long refurbishment [10]. During this time, many of the show scenes had their lighting dimmed (with the Under the Sea scene having its lighting redone with backlight)[11]. Furthermore more animatronic fish were added to the attraction and Ariel and Prince Eric’s hair was changed from plastic to a more realistic looking hair in the scenes when they are on land [11]. 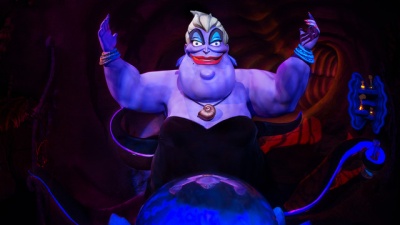 Urusla in Under the Sea: Journey of the Little Mermaid. Photo Credit: Disney.

The attraction begins with traveling through a hole in Prince Eric's ship. Here, they see Scuttle who clumsily tries to tell guests Ariel's story as he plays the accordion. After passing by the gull, the ride vehicles (which are shaped like clamshells) rotate backwards, as guests move along the beach, before being submerged underwater. As the clamshells travel through a rocky passage, guests can see Ariel and Flounder performing "Part of Your World" above.

After reaching the end of the passage, guests find themselves in Ariel’s grotto where she is surrounded by her collection of treasures from the human world. The mermaid and Flounder continue singing "Part of Your World", while Sebastian the crab occasionally pops up. As the clamshells move on, guests hear Sebastian remind Ariel about the perks of being under the sea and they can also see King Triton's castle in the background. Continuing on, guests find Sebastian conducting dozens of underwater creatures as they perform the number "Under the Sea".

As the underwater jamboree ends, guests enter a foreboding cavern where they are confronted by Flotsam and Jetsam (the pet eels of the sea witch Ursula) who welcome guests to Ursula’s lair. After passing by a large skeleton, Ursula can be seen performing "Poor Unfortunate Souls" with her crystal ball in front of her. Surrounded by her collection of lost souls, Ursula agrees to turn Ariel into a human in exchange for her voice.

Following Ariel's transformation, the clamshells resurface and enter a romantic lagoon. Here, Sebastian serenades Prince Eric and Ariel with the song "Kiss the Girl", in an attempt to get the Prince to kiss Ariel (allowing her to break her agreement with Ursula). As the crab sings, Ariel and Eric come close to kissing before they both shy away.

Continuing on, the clamshells pass the doorway of Prince Eric's castle where silhouettes show that Ariel and Eric have finally kissed. With this kiss, the mermaid’s voice is returned to her. An orb appears within Ariel's neck and then encloses the Prince and mermaid in a heart. In the distance, guests can see a smoking silhouette of a defeated (and much larger) Ursula. Moving forward, guests proceed to the attraction's finale, where Sebastian, Flounder, King Triton and other characters celebrate the marriage of Ariel and Eric. From a shore-side gazebo, the newlyweds wave to guests, as fireworks go off overhead. Finally, guests arrive at the unloading area where Scuttle remarks that "(he's) not such a bird-brain after all."

To see a video of Under The Sea: Journey of the Little Mermaid click play below. The attraction begins at around the 2:00 mark.