Beauty and the Beast Live On Stage

Beauty and the Beast Live on Stage is an attraction located in Disney's Hollywood Studios.

The biggest change to Beauty and the Beast Live on Stage took place in March of 2001, when the structure of the show was changed [5]. The new show featured songs in a more chronological order, making it more like the film. Besides reordering the songs, a new prologue song titled "Prologue: The Enchantress" and the song "Belle (Reprise) were added to the attraction [6].

Beauty and the Beast Live on stage begins with a prologue titled "Prologue: The Enchantress". During the prologue, guests see the young prince turned into a beast, as the narrator describes the unfolding events:

"Once upon a time in a faraway land, a young prince lived in a shining castle. Although he had everything his heart desired, the prince was spoiled, selfish and unkind. One winter's night, an old beggar woman came to the castle and offered him a single rose in return for shelter from the bitter cold. Repulsed by her haggard appearance, the prince sneered at the gift and turned the old woman away. But she warned him not to be deceived appearances, for beauty is found within. She had seen that there was no love in his heart and as punishment she transformed him into a hideous beast and put a powerful spell on the castle and all who lived there. If he could learn to love another and earn their love in return, the spell would be broken. If not, he would be doomed to remain a beast for all time. As the years passed he fell into despair and lost all hope. For who could ever learn to love a beast?"

As the prince (now turned into a beast) leaves the stage, the curtain behind him rises to reveal the residents of a small French town. Belle then takes center stage, singing the song named after her. As she sings, the townspeople act out the mundane tasks she describes. During the song, Gaston appears on stage, proclaiming his love for her. He sings of his plans to marry Belle, as the townspeople begin singing the song "Gaston", which describes his many merits. After the song ends, Gaston approaches Belle, proposing to her. When Gaston tells her that her dreams are about to come true, Belle exclaims that he knows nothing about her dreams before singing "Belle (Reprise)". As the scene changes back to the prince's castle, the narrator explains:

"Belle got more adventure, then even she, in her wildest imagination could have dreamt. For through a series of strange circumstances, she found herself held captive inside a dark and foreboding castle, inhabited by a very odd collection of cabinetries." 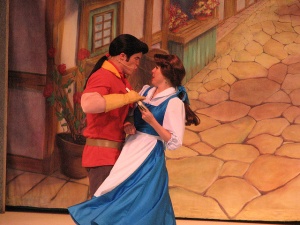 As the narrator talks, Lumière, Cogsworth, Mrs. Potts and Chip appear on stage. They then explain that they are inviting Belle (and the audience) to dinner. Lumière welcomes the guests as he announces that "the dining room proudly presents, your dinner". Dancing tableware then begin to sing "Be Our Guest", as Belle watches on in amazement. As the song ends, the scene shifts to the west wing of the castle, where the Beast growls and yells that Belle will only see him as a beast. Mrs. Potts, Lumière, Cogsworth and Chip hopefully explain however, that she might be the one who can break the spell. When Belle enters the room, the Beast yells that he told her never to enter the wing. After an argument, the others tell Beast to apologize, which he does. Belle and the Beast then start to sing "Something There" as they begin to fall in love.

Although initially it seems as though the Beast is dead, Belle's love is enough to reverse the curse. The enchantress then appears back on stage, turning the Beast back into a young prince. The prince and Belle then dance together as Mrs. Potts sing's "Beauty and the Beast". After leaving the stage momentarily, the prince and Belle return in their royal clothes. As the song "Beauty and the Beast" ends, the two kiss, ending the show. After the show, all of the performers come out and take a bow, and a rose is given by Belle and the Prince to a lucky audience member.

To see the current version of Beauty and the Beast Live on Stage, click play below!