While the Canada pavilion eventually opened as one of World Showcase’s opening day pavilions, the pavilion that finally opened was drastically different from the one that had originally been designed. Disney had initially approached the Canadian government about sponsoring a Canada pavilion for World Showcase, however when the government refused (due to fears that stereotypes such as lumberjacks would be used) Disney decided to create the pavilion without a sponsor [1]. This lack of sponsorship gave Imagineers the freedom to create the pavilion from an outsider’s perspective [2].

Original plans for the Canada pavilion called the pavilion to be divided into two halves, French Canada and English Canada [2]. The barrier between the two would have been the pavilion's main street, where restaurants and shops would be located. When designing this version of Canada however, Imagineers faced a problem. Due to the similarities between the two cultures it became hard to differentiate the Canada pavilion from America. To solve this issue, Imagineers decided to base the pavilion on Canada’s wilderness, focusing specifically on the eastern seaboard. 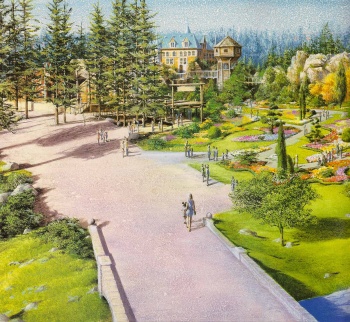 Concept art for the Canada pavilion.

When construction began on the Canada pavilion, Imagineers wanted to use artificial trees to further immerse guests into the Canadian wilderness [3]. When the trees were installed however, it became clear that they would disrupt the forced perspective used by the rest of the pavilion’s structures. Eventually, Dick Nunis (the pavilion’s project manager) called for the trees to be removed, and the idea was scrapped [3]. A treeless Canada pavilion opened with the rest of EPCOT Center on October 1, 1982.

Since opening day the Canada pavilion has seen a few changes. The first real change to come to the pavilion came in 1986 when La Boutique des Provinces opened on the second floor of the Hotel du Canada [4]. The next change to the pavilion came in 1997 when the table service restaurant Le Cellier had its menu updated [5]. At this time, the establishment was renamed Le Cellier Steakhouse [5]. Subsequently, in 2005 La Boutique des Provinces, which was located above Le Cellier Steakhouse, closed to guests [4].

Perhaps the most significant change to the Canada pavilion came in 2007, when the pavilion’s only attraction O' Canada closed for refurbishment. The closure came about after numerous Canadians began to complain that the film was dated [4] During the renovations, the attraction's film was updated and given a new narration by comedian Martin Short. At this time, O' Canada’s theme song "Canada (You're a Lifetime Journey)" was also rerecorded by Eva Avila. The updated version of O’ Canada opened to guests on August 31, 2007 [6].

The first sight that guests see after entering the Canada pavilion is the Victoria Gardens. Inspired by the Butchart Gardens near British Columbia, the Victoria Gardens is a beautiful landscape of various floral arrangements. To the right of the gardens, guess can find Canadian maple trees.

Moving on into the pavilion, guests enter a Northwest Indian Village. Here totem poles give one example of the kind of objects sculpted by the Northwest Coast native population. Nearby, guests can find the Trading Post, a shop housed within a log cabin structure.

Continuing forward, guests come upon the Northwest Mercantile. Originally created as a representation of Canada's early frontiersmen, it is in this area that guests begin to see both French and English influences.

Up ahead, guests cross over a stream and continue their journey along the Rue de St. Louis. On the right hand side, guests can visit the Hotel du Canada. This Victorian building was based on the Chateau Laurier in Ottawa. Representing the type of hotels that sprang up along Canada’s early railroads, the Hotel du Canada has a French Gothic Design. Located at the base of the Hotel du Canada, is Le Cellier, Canada's table service restaurant.

Leaving behind the Rue de St. Louis, guests find themselves following a path along a steep mountainside. As the path continues along a river bank, guests come to an area made to represent the Salmon Islands. Here, a 30 ft. waterfall feeds a whitewater steam that encircles the island. As guests continue down the path, they come upon Maple Leaf Mine home to the Circle Vision 360 film Canada Far and Wide.

Canada Far and Wide- This Circle-Vision 360 film takes guests on a tour of all that Canada has to offer.

O' Canada- This CircleVision 360 film took guests on a tour of Canada. The film was updated in 2007, after which the attraction was hosted by comedian Martin Short. O'Canada closed on August 1, 2019 for refurbishment. At this time, the attraction is expected to get a new film and projection system. 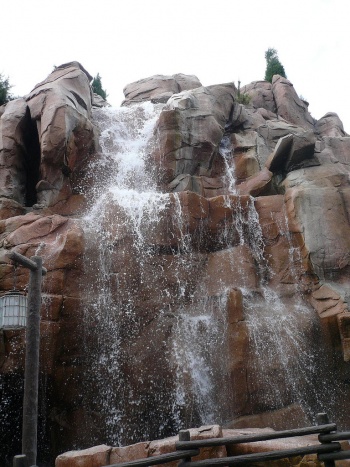 A large waterfall in the Canada pavilion. Photo Michael Gray

Northwest Mercantile- This large store sells all kinds of authentic Canadian merchandise. Among the items available here are Christmas ornaments, maple syrup, NHL hockey jerseys, and even Canadian wines. The shop is themed as a frontier trading post.

The Trading Post- This store sells authentic Canadian merchandise as well as Disney souvenirs. This store is themed to look like a Native Canadian longhouse, and three totem poles can be found directly across from it. The Trading Post is connected to Northwest Mercantile.

Off Kilter- This Celtic rock band could be found throughout the week at Canada's Mill Stage. The band was formed in 1997, replacing the previous Canada band, the Caledonian Bagpipe Band. In 2014 it was announced that Off Kilter would end their performances in the pavilion.

The Canadian Lumberjack Show- This show showcased skilled lumberjacks who competed in a series of events. Each show lasted between approximately 10-13 minutes.

TradNation- This five piece band celebrated the musical heritage of Quebec by performing traditional songs and step dance. TradNation's shows usually lasted for 20 minutes. The band made their debut on January 15, 2016.

Alberta Bound-This five piece band played traditional Canadian music of varying genres. The band made their debut on May 5, 2016 [11] and were replaced by Les Parfaits in June 2016.