Circle of Life: An Environmental Fable

From The Mickey Wiki: Your Walt Disney World Encyclopedia!
Jump to: navigation, search
Circle of Life: An Environmental Fable was an attraction located in The Land pavilion in Epcot

Circle of Life: An Environmental Fable replaced the film Symbiosis in The Land pavilion's Harvest Theater. Symbiosis, which highlighted the relationship between man, technology and the the land, had been playing since the pavilion's opening in 1982 [1]. Although Symbiosis was originally scheduled to close in September 1994, this was delayed until January 1, 1995 [1]. Despite the fact that it was billed as a new film, Circle of Life: An Environmental Fable combined re-edited footage from Symbiosis with new updated scenes. The film also featured characters from the popular Disney movie The Lion King including: Timon, Pumbaa, and Simba, who showed guests the importance of conservation [2].

While Circle of Life: An Environmental Fable was significantly more "kid friendly" then its predecessor, the film still tried to show the challenges facing the planet. According to the film’s director Bruce Morris:

"We wanted to show environmental problems in modern society but move people emotionally to realize that, 'Yeah, we can do something about this"

At the same time however, Disney wanted the film to be entertaining. Tom Fitzgerald (then Senior Vice President of Disney Theme Park Productions) noted that produces did not want the attraction to be preachy. Fitzgerald explained,

“Primarily, we want to entertain. And if guests get the message to be more environmentally responsible, we've accomplished our mission."

The film opens with Mufasa (from The Lion King) declaring, “All things exist together in a delicate balance and so we must respect every living thing because we are all connected in the great circle of life”. This warning is followed by a montage of wildlife from all over the world set to the song "Circle of Life". Following the end of the song, the film transitions into animation.

The first animated segment of the film depicts Simba drinking from a watering hole, until he is rudely interrupted by Timon and Pumbaa. The duo are removing trees in order to dam a stream and create "the biggest lake on the Savannah". The reason behind this construction, is that the twosome hope to construct and develop "Hakuna Matata Lakeside Village", where animals will be able to live the good life. Although Timon and Pumbaa are swept away by their idea, Simba notes that the animals downstream rely on the water that has now been dammed. In order to show them the error of their ways, Simba decides to tell a story about a "creature who sometimes forgets how everything is connected in the great circle of life".

Transitioning back to live action, Simba tells the story about the evolution of human society. Although they started out small (living in communion with the circle of life), humans eventually began to abuse the land. At this point in the attraction Hoover Dam is shown, which causes Timon and Pumbaa to decide that they need to plan bigger. After the brief interruption Simba continues his story, explaining that as human populations exploded they began to take up more and more of the land. As scenes from modern civilization are shown (including large scale farming, city life, skyscrapers and high rises), Timon and Pumbaa begin to get excited. Unfortunately, as Simba explains, in order to maintain their new cities, humanity needed more power. At this point, clips of Las Vegas and mass transportation are shown as Simba notes that life is not always about "having more and more of everything". 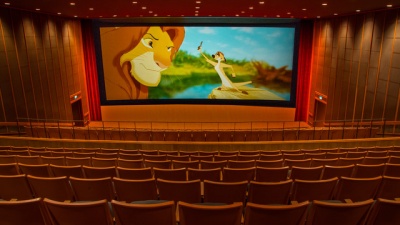 Simba and Timon in Circle of Life: An Environmental Fable. Photo credit:Disney

The film goes on to show that as humanity improved their lives, there were terrible consequences on the environment. As destroyed forests, polluted water, and smog filled air is shown, it becomes clear that Timon does not understand the point of the story. After getting the meerkat’s attention by roaring, Simba shows the duo the consequences of not living within the circle of life. At this point, garbage dumps, polluted air and water, traffic jams, and dead fish are all shown. Furthermore, massive deforestation, forest fires, and oil spills are depicted.

After Pumbaa informs Simba that he and Timon "had no idea", Timon asks the lion if everybody was ok with the damage being done to the environment. Simba tells them that no, people were not ok. In fact, once they realized what was happening they began to try to remedy the problems they had created. At this point a montage of conservationists, formerly endangered animals, and the creation of Earth Day are shown. Simba then notes that people have begun to clean up the water through treatment plants. Next, public transportation and recycling is depicted, and Simba asserts that in the future humanity is looking for cleaner ways to power their world, including solar and wind energy. Humans are also beginning to study the world’s creatures in order to help protect them.

As the film turns back into animation, Timon and Pumbaa are shown packing their bags so that they can help humanity. Simba stops them and asks if they are forgetting something. After a moment, Timon says he understands what Simba is hinting at, that "making the world a better place, starts in your own back yard". After this realization Timon and Pumbaa undam the stream, and claim that they are going to create the "Hakuna Matata All Ecological Family Village Resort" instead. At this, Simba roars in approval and "Circle of Life" begins to play again. The film then closes with another montage which shows humans living in harmony with animals, and the circle of life.

To watch Circle of Life: An Environmental Fable click play below: