The Connections Cafe and Eatery is a counter service restaurant (and Starbucks) located in the World Discovery area of Epcot.

The Connections Cafe and Eatery was initially announced on November 20, 2021, as World Discovery's main eatery [1]. With the closure and partial demolition of Innoventions, the park's central hub lost both its main counter service restaurant (the Electric Umbrella) as well as the park's Starbucks location (the Fountain View Starbucks). With the creation of the Connections Cafe, World Discovery was given a location that would provide both of these services.

Unlike the highly stylized Electric Umbrella, the Connections Cafe was given a cleaner, more modern aesthetic with minimal theming. Despite this, on March 28, 2022, Disney reveled the the restaurant's tiling would pay homage to Walt Disney's original EPCOT designs as well as Walt's initial Florida Master plan [2]. According to Imagineer Zach Riddley:

"Drawing inspiration from Walt’s Florida project master plan, Imagineers designed a flooring inlay for Connections Eatery at EPCOT which would infuse the original DNA of the resort into this new location within World Celebration. One of my favorite details is the intersection of I-4 and US 192 highways, represented by the orange lines which cut across the map. Linework showing original ideas for EPCOT, Magic Kingdom and other recreational amenities reflect the diversity and scale that has always been the guiding vision for Walt Disney World.


These designs are created with a sustainable bio-polymer material which is 3-D printed to provide an intricate template. That linework is then laid out by skilled craftspeople to create inlays in the poured flooring material, with the final design revealed through rounds of sanding and buffing, where classic and cutting-edge techniques meet [2]"

Click below to see the official Connections Cafe and Eatery menu: 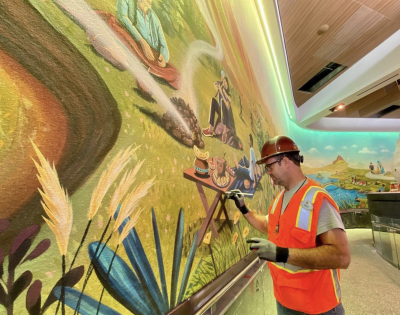 An Imagineering Artist working on the Global Gatherings Mural