The Discovery River Boats was an attraction located in Safari Village in Disney's Animal Kingdom.

The attraction that would eventually become the Discovery River Boats was originally intended to be an exciting boat ride. On this attraction guests would come face to face with a fire breathing dragon, spot a unicorn, get attacked by a kraken, and spot a live dinosaur [1]. According to Jim Hill the attraction's original plot would have been:

As your boat floated past the opening of the cave, you would have seen a duplicate of the dragon found in the cavern under Le Chateau de la Belle au Bois Dormant at Disneyland - Paris. Only WDW's version would have been a lot more active than France's sleepy monster. This dragon would have craned his neck out of the cave, roared at the guests and then breathed fire their way, before once again settling back down to sleep.


At this point, your boat driver would have started to get nervous. He would explain that he was worried that the dragon's roaring would awaken the Kracken, a mythical Greek sea monster that was known to lurk along this stretch of Discovery River. Sure enough, the water around the boat begins to bubble ominously. Off to one side, the huge fin of the Kracken suddenly cuts through the water. As the boat begins rocking back and forth, you're certain you're headed for a watery grave. Just then, your captain pulls out a lyre and begins plucking an odd tune. As the boat stops rocking and the water stops bubbling, the captain explains that music puts the Kracken back to sleep.


Once that it's safe to move on, the boat continues to head up river. Just as you round the bend, your captain points off excitedly to your left. There on the shore, you catch a glimpse of a unicorn. The beautiful white creature -- shrouded in mist as it stands in a picturesque grove of trees -- paws the earth lightly with one hoof and nods its golden horn our way. The unicorn's only visible for just an instant, but it truly is a beautiful sight. As your boat pulls up to the dock in Harambe, you and your fellow guests would still be buzzing about the wonders you [2]

Due to budget constraints however, the scale of the attraction was greatly reduced [3] . Instead of being a full on attraction, the River Boats would instead preview Animal Kingdom’s various lands and provide transportation to the other side of the park. In the parks preopening literature, the attraction was described:

"...a preview of the fascinating lands of Disney's Animal Kingdom. You'll depart from Safari Village and cruise past the foreboding Dragon Rocks, where fearsome bellows and gusts of real fire emanate from a rocky lair. Farther upriver, as steaming geysers erupt right beside your boat, you'll get a waterside view of Harambe just before you exit at Upcountry Landing near Africa. You may also depart from Upcountry Landing to complete your tour of Discovery River. You'll pass the shores of Asia, an exciting new land opening in early 1999. Then sail around giant animal sculptures that rise from the depths to spout water through the air. Be careful when you cruise by DinoLand, U.S.A. - you just may startle a 35-foot dinosaur feeding in the river!"[4]

The Discovery River Boats opened with the rest of Disney’s Animal Kingdom on April 22, 1998. The attraction featured two docks where guests could board the vessels. The first was in the park's front hub "Safari Village" (later called Discovery Island), and the second in the park's Asia section [5]. Although initially Disney had hoped the boat ride would serve as an attraction (in a park that desperately needed them) as well as transportation, they quickly found that guests were not thrilled with the boats. Due to the slow loading time, the lines for the Discovery River Boats were long [6].This combined with the fact that there was not much to see once guests boarded the boats, led to a series of complaints. In an attempt to add more action to the boat ride, Disney had cast members walk around the boat and showcase various wildlife (such as spiders, lizards or snakes) [5].

By November 1998 Disney changed the name of the attraction to the Discovery River Taxi in an attempt to emphasize the transportation aspect of the boats. Furthermore, at this time the large Iguanodon that was located on the shores of DinoLand USA was removed from attraction [5]. Despite its name change, guest dissatisfaction continued and the River Boats were closed by the end of 1998. 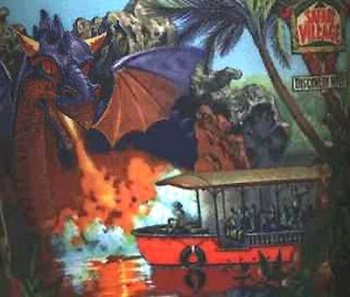 Concept art for the Discovery River Boats. Note the dragon was a physical presence, not just implied.

In March of 1999 the Discovery River Boats reopened as Radio Disney River Cruise. Now instead of having guests focus on live animals or shore side scenes, guests would hear a "broadcast" by Radio Disney DJs Just Plain Mark and Zippy who were supposedly broadcasting from atop the Tree of Life. At this time the boats were also repainted brighter colors [7]. The Radio Disney River Cruise also no longer stopped to let guests disembark at the second dock. Instead, guests took a non-stop ride from whatever dock they loaded on. The new attraction was short lived however, as the Radio Disney River Cruise closed on August 21, 1999.

The Discovery River Boats began with guests boarding one of seven boats: the Manatee Maiden, Leaping Lizard, Scarlet Flamingo, Otter Nonsense, Hasty Hippo, Crocodile Belle, or Darting Dragonfly[8]. Guests could board the Discovery River Boats from two docks. The first, was located in “Safari Village” (eventually renamed Discovery Island) while the second dock was located in Asia and known as Upcountry Landing. While on the Discovery River Boats guests would go on an 18 minute round trip tour around the Tree of Life. Along the way they would see various scenes on the shores of Camp Minnie-Mickey, DinoLand USA, Africa and Asia. In an attempt to make the boat ride more exciting, cast members who showed guests various small creatures were eventually added to the boats.

Although the Discovery River Boats were primarily designed for transportation, the attraction did feature a few scenes.

In the initial plans for the Discovery River Boats, guests would have passed by a unicorn standing majestically on the river bank[9]. In order to add to the unicorn effect, a mist would have been present to make it seem as if the animal was moving [1]. Although a unicorn statue was created for the attraction, it is unclear if guests ever saw the animal after the attraction actually opened.

When the Discovery River Boats opened in 1998, as the boats passed by DinoLand USA they would come face to face with the Iguanodon that guests had rescued and brought back to the present time on Countdown to Extinction. As the boats passed by the Iguanodon would sway its arms in the water as if it was going to splash the boat. The Iguanodon was part of the original plans for the Discovery River Boat, as it was initially intended to be one of the many creatures that guest would see on the attraction. The Animatronic dinosaur also helped tie the attraction in to Countdown to Extinction (later renamed DINOSAUR). By November of 1998 the Iguanodon would be removed. The Animatronic (stripped of most of its skin and parts) would later turn up in the Studio Tram Tour: Behind the Magic at Walt Disney Studios Park in Disneyland Paris [10]

Perhaps the biggest draw of the Discovery River Boats was to be the Dragon Rocks area. Here, Imagineers initially hoped to create a preview of the planned Beastly Kingdom area as guests passed by Camp Minnie-Mickey. To do this, Imagineers wanted to have guests to sail past a rocky cave which had various deceased knights outside. As the boats passed by the mouth of the cave guests would have heard a loud growl. As the guests finally got past the cave and focused their attention elsewhere, the dragon's head and neck would have lunged out. After the boats were at a safe distance the dragon would have unleashed its fire breath on the water[11]. Unfortunately, when Disney’s Animal Kingdom went over budget the scale of the Discovery River Boats was reduced. As guests rode the attraction they would pass by the dragon’s cave. Instead of seeing the beast however, guests would only hear menacing growling. After the boats passed by, a large ball of fire would come flying out of the cave [12]. Following the closure of the Discovery River Boats, this effect was turned off, although the cave itself could still be seen from Camp Minnie Mickey.

Below is a video of the Dragon's fire breath effect

As guests passed the shore of Africa, hot spring geysers would go off [5].