Since opening on December 22, 2018, the Disney Junior Dance party has not seen any major changes [3].

While waiting for Mickey to arrive, Vampirina appears on screen in her bat form. Although she's unrecognized at first, Finn Fiesta eventually recognizes her and the Vampirina theme plays. The young vampire is joined on screen by Gregoria, Demi, and Wolfie. After the Audience does the "spin her in dance", Vampirina appears in person on stage. Gregoria then states that even though it is a dance party, she doesn't dance. Vampirina then suggests that they all do the "spine chiller" dance, which no gargoyle can resist. As Demi joins in, Vampirina sings a song about Dancelvania Day which everyone dances to. After a big finale of both songs, the Vampirina characters say goodbye. 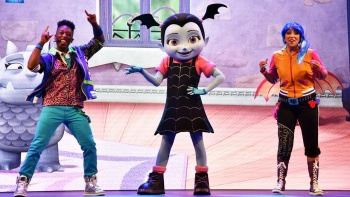 Vampirina on stage at the Disney Junior Dance Party!

At this point in the show, Mickey and the Roadster Racers appear on screen again. Although they are not to the party yet, Goofy suggests that they travel by bubble. As bubbles fall on the audience, Mickey assures them that they will be there soon.

After this announcement, the Doc McStuffins theme song begins to play on the screen. After the audience does the "spin her in" dance again, Doc appears on stage. Chilly the Snowman (who is on the screen) then says that he has a new dance called the Chilly Chilly Cha Cha. Although the group tries to do the dance, Chilly is unable because it is so warm that he feels like he will melt. Doc diagnosis the snowman with "warm and toastyoses". In order to cure the disease, Doc and DJ Deejay make it start to snow. This cures Chilly and allows him to do the Chilly Chilly Cha Cha.

At the end of the dance, Chilly and Doc wave goodbye and Mickey and the Roadster Racers are shown going up a mountain, before slipping on oil and crashing. Although the group has only been slowed down, they are still not at the party yet.

As the Lion Guard theme song plays on the screen, Timon appears on screen and asks to be spun in. Now on stage, the meerkat leads the audience in the "Zuka Zoma". At the end of the song, DJ Deejay notes that the dance party is almost over and Mickey isn't there yet. While Finn Fiesta laments that all is lost, DJ Deejay leads the audience in a "Roadster Racers" chant. At this point, Mickey and the gang arrive and Mickey is spun on stage. Mickey, DJ Deejay, and Finn Fiesta then sing the attraction's final song before the show ends as guests do the DJ Shuffle out the door.