The Maharajah Jungle Trek is an attraction located in Asia within Disney's Animal Kingdom.

Although not an opening day attraction, the Maharajah Jungle Trek opened with the rest of Asia on March 18, 1999 [1]. Sometime after 2009 the Tapir was removed from the Jungle Trek [2].

The Maharajah Jungle Trek is a self-guided walking tour that brings guests face to face with some of Asia's rarest animals. The Jungle Trek (like the rest Asia) is set in the fictional village of Anandapur.

The backstory for the Maharajah Jungle Trek states that since ancient times, the rajahs of Anandapur have hunted tigers in the forest. In 1544, King Bhima Disampati decreed that the forest would become a Royal Preserve where he and his guests could hunt. In order to make the hunting easier, he had the forest enclosed, trapping the animals inside. Ironically, the king was later killed in a hunting accident, and his successors eventually turned the enclosed forest into a nature preserve, where animals and the villagers could live in harmony.

Further evidence in the attraction suggests that the preserve was part of a British colony until 1948, when the villagers of Anandapur regained control and opened the preserve up to the outside world [3]. 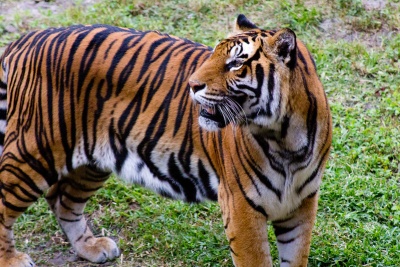 A Sumatran tiger as seen from the Maharajah Jungle Trek. Photo Randy Stewart [4].

The Maharajah Jungle Trek also features an aviary where guests can see some of Asia's most exotic birds.

Other Points of Interest [6] 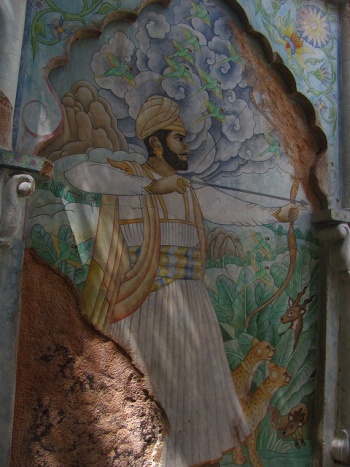 Finally, guests reach the final resting place of Anata the founder of the Kingdom of Anandapur. Five carved tiles show the relationship that man (as represented by Anata) have had with animals.

1. In the first tile man and animal live together in harmony.

2. In the second tile, animals hide under a tree, living in fear of man.

3. In the third tile, man destroys the forest and kills the animals.

4. In the fourth tile, the heavens show their displeasure with man's actions.

5. Finally, man repents and once again lives in harmony with the animals.

After passing by the tiles, guests come to the burial place of the ancient king in the form of a sarcophagus inside a temple. The inside of the temple serves as the attractions aviary.