The Swiss Family Treehouse is an attraction located in Adventureland

As with many opening day attractions, the Swiss Family Treehouse's history began in Disneyland. In 1962, Two years after Disney released the successful movie “The Swiss Family Robinson”, a version of the family’s treehouse was created for Disneyland’s Adventureland [1]. The walkthrough attraction let guests tour the massive shelter that the Robinson family built while stranded on the island and proved to be both cost efficient and popular.

Like other popular Disneyland attractions, the Swiss Family Treehouse was selected for inclusion in Walt Disney World. The Treehouse opened as the "Swiss Family Island Treehouse" on October 1, 1971, with the rest of the Magic Kingdom [2]. Although the tree looks authentic, it is actually made up of steel, concrete and stucco [3]. Since its opening, the only major change to the attraction came in 1981 (some websites mistakenly state the date as 1989) when the world "Island" was removed from the name [4] [5].

In 2017, Disney added a waiting area for guests who chose not (or are physically incapable of) climbing the treehouse while the rest of their party does. This new area features the "starter's chair" used by Mother, which was taken straight out of a scene from the film. In the Swiss Family Treehouse, when celebrating their first year on the island, the family holds a series of festivities including games and races. The chair built during this scene, and the flags that accompany them are now apart of the attraction [6].

The story of the Swiss Family Treehouse begins at the base of the tree and continues as guests climb up. The walkways that guests climb as they ascend into the treehouse are made from the Swallow's deck [7].

At the base of the tree, guests are first given the back story to the Swiss Family Treehouse. A plaque reads:

composed of myself, my good wife and three sons, Fritz Ernst and little Francis..we're the sole survivors by the grace of God of the ill fated ship SWALLOW.

From the wreckage we built our home this tree for protection on this uncharted shore.

Also at the base of the tree is a pulley system which brings water up to the treehouse in bamboo cups. Once the water reaches the various rooms in the house, bamboo pipes carry the water into barrels. 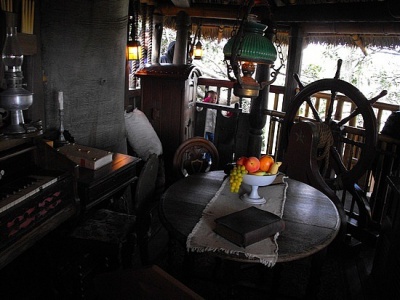 The living room in the Swiss Family Treehouse.

As guests begin to climb the treehouse, the first room they encounter is the family living room, located on the right side of the walkway. In this room the family has an organ which plays the attraction's theme song “The Swissapolka”. Also of note in the living room is the SWALLOW's steering wheel, which was salvaged from the ship and brought up to the tree. Other items in the living room include: 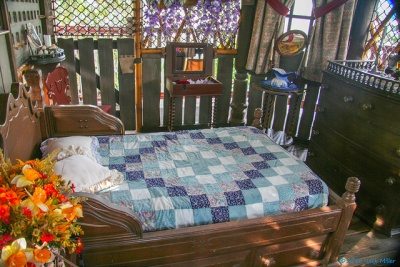 As guests continue to ascend up the tree the next room they encounter is the parents' bedroom, which is located on the right side of the walkway. This is the bedroom for Franz and his wife. The most prominent pieces of furniture in the room are the large bed, and the colorful curtains. If guests look closely they can also find Brandy that has been hidden in the rafters. Other items of note in the room include:

Across from the parents' bedroom, guests encounter the Jungle Lookout. A plaque next to the lookout says: 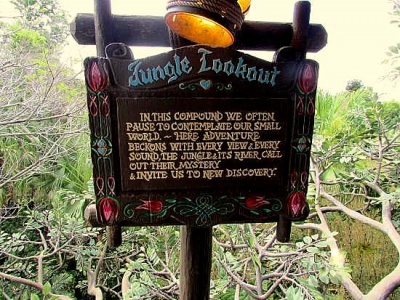 "In this compound we often pause to contemplate our small world -

Here adventure beckons with every view and every sound,

the jungle and it's river call out their mystery

& invite us to new discovery."

From the Jungle Lookout guests can see out into Tomorrowland, and even Cinderella Castle in the distance.

When guests reach the highest point in the treehouse they find Fritz, Ernst and Francis' room on their left. A plaque outside of the room states:

completed on the first anniversary of our deliverance July 17, 1805.

Guests should notice that the room is quite messy, with clothes tossed all around. Also of note is the fact that the boys have hammock beds. Other items in the room include: 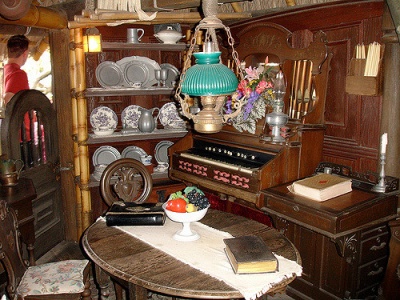 The library. Photo by Daryl Mitchell

As guests begin to descend down the treehouse, the next room they encounter is the library, which is located on the right-hand side of the walkway. A plaque above the library states:

These good books - the recording of man's ideas and achievements - were salvaged from our ship. We shall never hunger for food for the mind nor the soul.

Also featured in the library are a desk and a table, which hold two important books. The first is the Bible, which is located on the desk . On the nearby table, guests can see an encyclopedia. Both of these books were salvaged from the sunken ship. Other items in the library include:

When guests reach the bottom of the treehouse, they see the families’ kitchen. A plaque outside the kitchen reads: 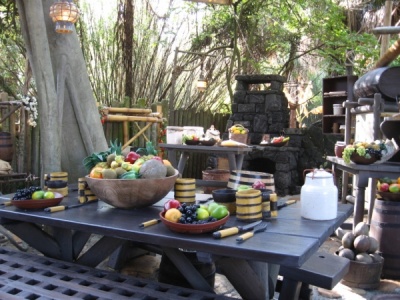 The kitchen in the Swiss Family Treehouse.

and dining room complete with running water volcanic stone hearth & oven utensils of our own making and salvaged from the wrecked “SWALLOW” plus natures bounty & my good wife's cooking amply fulfill our wants.

The kitchen has an oven stove (as mentioned on the plaque) and also many large tables made of wood. There are many other kitchen items to be found including:

After passing by the kitchen, guests exit back out into Adventureland.