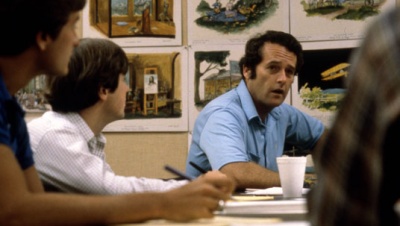 Corridor of Flags and Preshow[edit] 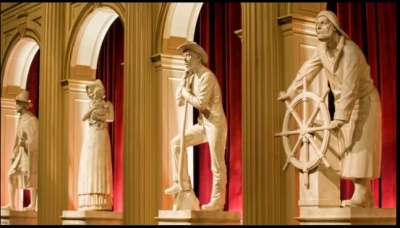 After entering the American Adventure pavilion (and listening to the Voices of Liberty Perform), guests leave the main rotunda and enter the Corridor of Flags. As visitors move the pavilion's second floor, 44 different flags from American history are showcased. Flags located here include Revolutionary War era flags, Colonial flags, and even foreign flags from the countries that first came to America [13]

Following the Corridor of Flags, guests enter the main theater. Here, 12 life size statues can be seen on the left and right walls. The statues represent the "Spirits of America" and they include:


You think that these landlubbers


never would last,
this cargo of pilgrims,
twelve weak for the mast.


at last we've arrived.
and praise be to God,
nearly all have survived.

But look o'er this wilderness,


brings me to dread,
that the first bitter winter
ill leave 'em all dead.

They call themselves pilgrims,


these poor wretched souls.
With a dream to be free,
in the new world, there goal. ♫ 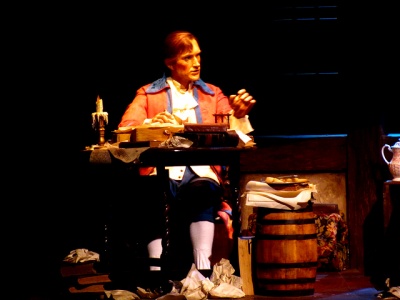 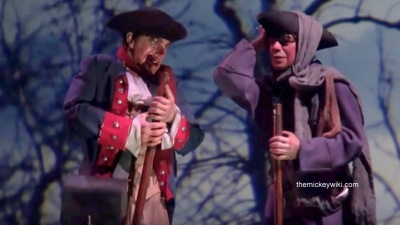 ♫ In the days of Valley Forge,

my lords, forever we must hail We fight the cold with bags on our feet, as the lobster backs regail

Oh, the time will come

When they'll be on the run As their ships will homeward sail.

Oh it's a great delight to march and fight 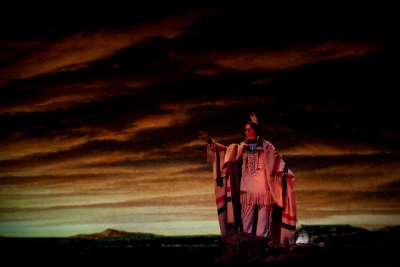 Chief Joseph in the American Adventure. Photo by Rain0975

Following the end of the Revolutionary War, Mark Twain takes over as the show's primary host. Twain announces that subsequent to its establishment, America was Westward bound, and heading to new frontiers. As images of horses, Indians, frontier men, and a panhandler flicker across the screen, Mark Twain tells Franklin:

At this point Frederick Douglass is shown on a raft, floating down the Mississippi River. Douglass then speaks to Twain directly saying:

As Douglass drifts away, the screen once again goes dark. A family getting their portrait taken in Matthew Brady's studio then rises to the stage. The two brothers are heard arguing over the merits of Southern succession from the Union. As their father tells them not to ruin their mother's birthday, their mother states that she is just happy that the whole family is all together. As a camera flashes (taking the families’ picture) the song “Two Brothers” begins to play.

As images showing the Civil War are shown on the screen, Two Brothers continues in the background. The song tells the story of brothers who end up fighting on opposite sides in the Civil War. It is inferred that the song is talking about the family who was previously shown getting their portrait taken. The lyrics to Two Brothers are: 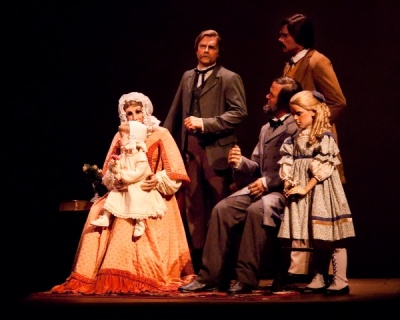 The family that is featured in the Two Brothers scene.

♫ Two brothers, on their way.


Two brothers on their way,
Retrieved from "http://themickeywiki.com/index.php?title=The_Mickey_Wiki:_Your_Walt_Disney_World_Encyclopedia!&oldid=12395"