The Muppets Present... Great Moments in American History was a show held throughout the day in Liberty Square.

Development on what would eventually be "The Muppets Present... Great Moments in American History" began in 2014, shortly after the release of the Muppets Most Wanted film [1]. Initially, Disney had planned on creating a show where Sam the Eagle interacted with guests, however they eventually decided to incorporate Kermit, Miss Piggy, Gonzo and Fozzy in order to make it possible for the group to put on a full show [1]. After deciding that the show would be performed in the second story windows of the Heritage House in Liberty Square, Disney faced a few challenges. For starters, the Liberty Square trees (that have been present in the park since it opened) blocked the view of the windows from below. To rectify this, Disney Horticulture precisely trimmed the trees. Another issue that Imagineers faced was the Muppets themselves. Because the show was performed on the second story of a building, with guests watching from below, the Muppets were created 5% larger than they normally are [1].

In order to make sure that the show's script was true to the Muppet characters, Muppet Studio writer Jim Lewis was called in to consult. When talking about Lewis' contributions, VP of Mupett Studios Debbie McClellan, noted:

“What Jim wound up doing was fine-tuning the scripts Disney World’s Creative Entertainment department had developed for these shows. He would point out a punchline that would work better for Fozzie, or come up with a bit of comedy business that spotlighted the peculiar talents of Gonzo or Miss Piggy. And of course, as anyone who’s watched the Muppets knows, you can almost always make a scene funnier by throwing in a few chickens. Our goal was to present real history, but with lots of surprises and inspired Muppet silliness.”

The Muppets Present.. Great Moments in American History was announced by Disney on September 23, 2016 [2]. Located above the Heritage House in Liberty Square, the new show features town crier James “J.J.” Jefferson and Sam the Eagle retelling some of America's greatest moments. Joining the duo to "help" put on the show are Muppets: Kermit the Frog, Miss Piggy, Gonzo, Fozzie, and more. The Muppets Present... Great Moments in American History debuted on October 2, 2016 [3], and did not see any major changes until it closed on October 6, 2019 [4]

Signing of The Deceleration of Independence

The show began with town crier James Jefferson gathering everyone around him. "JJ" and Sam the Eagles (who was located in a window overhead) then discussed what story they were going to be sharing from American history, which Sam proudly states is the story of the signing of the Declaration of Independence. The duo then begins to sing the backstory of the signing of the document, before JJ announces that they are bringing out some friends to help them. 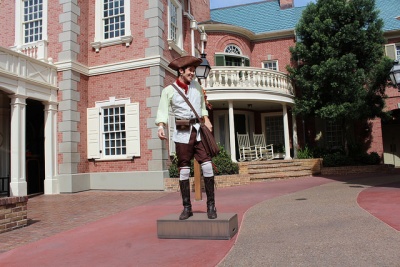 In the windows above his right shoulder (the second story of the Heritage House), Kermit, Gonzo, Miss Piggy and Fozzie appear. The group then sings the song "Great Moments in History". After the song, Sam announces that as the official Liberty Square historian he has created tributes to every important moment in American history. The eagle then begins to recite the Deceleration of Independence from memory, before he is interrupted by Kermit, who says that the rest of the gang has some ideas to make Sam's show more entertaining. After the audience votes that the Muppets should help (over Sam's objections), Kermit assures him that they always "do things with dignity".

At this moment, Gonzo appears in the window to announce that the all chicken chorus is ready to perform "The Cluck Heard Round the World". After Kermit rejects the idea and chases the chickens off stage, he regretfully informs Miss Piggy that since the show is about the Founding Fathers, there is no role for her. Miss Piggy responds by saying "we'll see", before Kermit throws the show back to JJ.

Finally beginning to tell his story, Sam the Eagle informs guests that the scene is being set in 1776 Philadelphia. He then introduces Thomas Jefferson (Kermit), John Adams (Gozno) and Benjamin Franklin (Fozzie). Sam says that the delegates are debating the idea of separation from England. After Fozzie and Gonzo say things like "debate, debate" and "argument". Gonzo (still as John Adams) eventually gives reasons for America to declare her independence, and Jefferson asks if there is are any arguments in favor of England. As the audience begins to chant "no King George", Miss Piggy appears on stage as King George/Queen Georgette. When Sam objects that King George was not at Congress, Miss Piggy dryly points out that a bear is playing Benjamin Franklin. After the Founding Fathers list their objections, the audience votes to declare independence from Queen Georgette. When Piggy is informed that England looses in the American Revolution, she disappears offstage, only to return seconds later as George Washington.

Following her return, Jefferson (Kermit) is chosen to write the Deceleration of Independence. Fozzie, Piggy and Gonzo then begin to make a series of ridiculous demands, and the chickens appear on stage to sing again. After Kermit yells at everyone to be quiet. He explains that the Deceleration was more then a list of demands, but instead that it was about things that "we all believe in, things that were worth fighting for". He then quotes the beginning of the Deceleration (with the chickens clucking God Bless America behind him).

We hold these truths to be self-evident: that all men are created equal; that they are endowed by their Creator with certain unalienable rights; that among these are life, liberty, and the pursuit of happiness.

Sam the Eagle is so moved by the performance that he begins to cry. After JJ remarks that he (Sam) is now the town crier, Sam says "just ring the bell". With a ringing of the bell, the group sings Great Moments in History ending the show.

Click below to see the Deceleration of Independence version of The Muppets Present Great Moments in American History:

The Paul Revere version of Great Moments in History begins with Kermit singing the shows theme song (also titled Great Moments in History), from a window above the Heritage House. As he is singing, Sam the Eagles appears in the window next to him. Greeting Sam, Kermit asks what tale they will be telling today. Sam announces that it will be The Midnight Ride of Paul Revere. Kermit then sings that its time to bring some friends out to help tell the story. On queue, Gonzo, Fozzie and Miss Piggy appear. The group then sings the rest of Great Moments in History. Taking center stage, Sam says that as the official Liberty Square historian he is proud to present a dramatic performance of Longfellow's Midnight Ride of Paul Revere (with additional dialogue by Sam the Eagle). 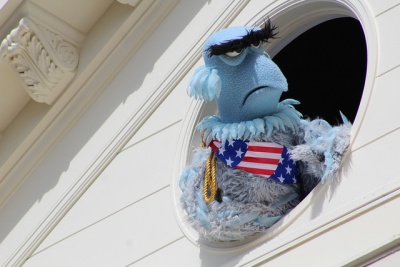 After cuing the patriotic music, Sam begins reading the poem's first line, "listen my children...". Although only halfway through the first sentence, Sam is interrupted by chickens, who begin clucking and running around him. When Sam demands to know what is going on, Gonzo appears and states that Sam said "listen my chicken". After Sam ushers the chickens and Gonzo off stage, he begins to recite the poem again. When Sam mentions Paul Revere, both Kermit and Miss Piggy appear on stage to play the roll. After Kermit informs Piggy that she can't play Revere or any other Founding Father, because they were all men, Piggy leaves stage saying, "we'll see about that".

Getting back to the story, Paul Revere tells his friends to put one lantern in the window if the British are coming by land and two if by sea. Fozzie then appears holding a lantern and saying "no problemo". Much to the chagrin of Sam however, Fozzie then says that he will put "three if by monorail, four if by pogo stick". Sam and Kermit both yell at Fozzie, who falls over, breaking his lamps.

As Paul Revere sees two lanterns in the window he goes to mount his horse. Unfortunately, the horse to be used in the play is sick, so Gonzo brings out a stick horse. Discouraged, Sam continues his story, saying that Revere road "by the light of the silvery moon". As he finishes his sentence, music begins playing and cheap moon prop appears at the end of a stick. Miss Piggy then appears in the center window and begins performing "By the Light of the Silvery Moon", with Gonzo and Fozzie helping. When Kermit asks Piggy what she's doing, she says that she has written herself into the play. When Kermit says she can't do that, Piggy karate chops him into the wall.

Continuing on with the story, Kermit (as Revere) announces that "the redcoats are coming!". When no redcoats appear, an exasperated Sam demands to know where they are. Piggy and the chickens (in British uniforms) then appear in the center window. Gonzo and Sam then begin to argue about the chickens being in the play, and Kermit and Piggy fight over her involvement altogether. Chaos ensues, and Fozzie appears onstage to tell Kermit that if things keep up, "the play will be history". Agreeing, Kermit blows his whistle and everyone comes to attention. The group then sings Great Moments in American History, and the show ends.

Click below to see The Midnight Ride of Paul Revere version of Great Moments in American History: