The ImageWorks is an interactive area located within the Imagination! pavilion in Epcot.

The ImageWorks was originally located on the second floor of the Journey Into Imagination pavilion. At the end of the Journey Into Imagination attraction, Dreamfinder would invite guests to further explore their imagination in the interactive playground. To get to the ImageWorks, guests would take a spiral staircase (or escalator/elevator) up to the pavilion's second floor. Here they could explore various exhibits, including:

Light Writer- This exhibit allowed guests to draw geometric patterns using laser beams. It was removed during the 1990-1991 refurbishments and replaced with Optical Illusions.

Optical Illusion- A painted scene showing hot air balloons which rotated around a cylindrical mirror. Although the balloons were drawn flat and elongated, they appeared to have perfect proportions when reflected.

Bubble Music This exhibit allowed guests to use a pad to create bubbles in multicolored tanks, as they played different sounds. The tanks in Bubble Music were then projected onto the wall of the smaller pyramid (this function was also known as the Liquid Projection). Bubble Music was replaced by Figment’s Coloring Book during the 1990-1991 refurbishments.

Figment's Coloring Book- This exhibit allowed guests to use projected light to add color to pictures of Dreamfinder and Figment that hung on the wall.

Dreamfinder's School of Drama- This exhibit allowed guests to act out various stories using "Chroma-Key" video technology, which added a background to a video. Here, guests could act out three different stories: 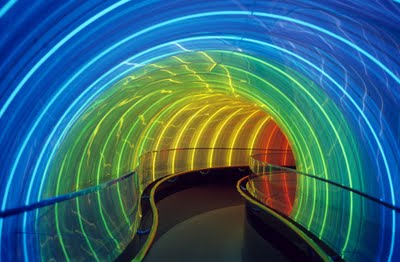 The Rainbow Corridor in the old upstairs ImageWorks.

Following the refurbishments during 1990-1991, Dreamfinder’s School of Drama was moved to the location of the Digital Wall exhibit. Making Faces- This exhibit allowed guests to take their picture and then alter their faces, by giving themselves different hairstyles, noses, ears and accessories.

Magic Palette- This exhibit allowed guests to paint pictures of the Dreamfinder, Figment, or the pavilion itself using touchscreen technology.

Kaleidoscope- A giant Kaleidoscope that guests could turn to create amazing designs.

Pin Screens- Giant tables which held thousands of pins. Guests could run their hands through the pins to create all kinds of shapes.

Electronic Philharmonic- This exhibit allowed guests to control an orchestra by moving their hands up and down. Sensors would recognize these hand movements which would raise and lower the volume of sections of the orchestra. When Electronic Philharmonic initially opened, the sensors responded to the tone of guest’s voice, as opposed to hand movements. This was quickly changed however.

The Sensor Maze: "It Knows You're There"- This maze featured many exhibits which were based on sensors. Exhibits found inside included:

Stepping Tones- Colored squares that would play music when stepped upon. 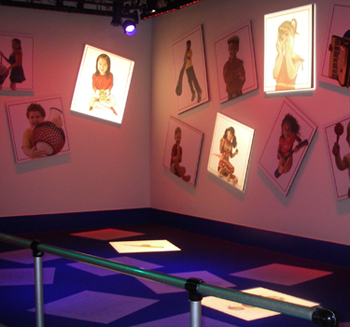 In 1998, both the Journey Into Imagination and the ImageWorks were closed for refurbishment. During the rennovation, the ImageWorks was moved to the first floor of the pavilion, and renamed the "Kodak: What If? Labs". Initially, the exhibits focused on guest's imagination, usually with a tie in to photography. Many guests complained that while the original ImageWorks had been an imagination playground, the Kodak: What If? Labs was simply an advertisement for Kodak. The exhibits during this time included: an exhibit where guests could conduct a 1990s orchestra, Stepping Tones (similar to the former exhibit) and a mirror that distorted guest's body.

Following the re-branding of the pavilion's main attraction to Journey Into Imagination With Figment in 2002, Figment was also added to the labs (although many of the exhibits remained essentially the same).

At the end of 2010, Kodak’s sponsorship of the entire Imagination! pavilion ended. At this time the name of the What If? Labs reverted back to the ImageWorks (the ImageWorks had been used as a secondary title ever since the 1999 renovation). On March 25, 2012, ColerVision announced it would assume sponsorship the ImageWorks.

The current exhibits located in the ImageWorks are:

On February 13, 2019, the Wreck-It Ralph meet and greet that was previously housed in Innoventions West was moved into the [Imageworks]] [1]. As part of this experience, guests can now meet both Ralph and Vanellope just outside the Journey Into Imagination with Figment's exit.