It's Tough to be a Bug! is an attraction located in Discovery Island within Disney's Animal Kingdom.

When Disney Imagineers created the Tree of Life, they originally wanted a high scale restuaruant named the Root Restaurant to be built inside of the icon [1] [2]. Early on however, Disney decided that they would be better served housing a show inside the tree [1]. Since the Tree of Life was going to be the symbol of Disney's Animal Kingdom, Imagineers wanted the show to have themes of nature and conservation. One idea that was pitched for the attraction was a film that would have shown guests the "Wonders of Nature" and concept work for this attraction was done by Imagineer Bryan Jowers [1] [2]. A film featuring characters from the Lion King was also considered, however Disney Imagineers felt that this concept was too similar to the Circle of Life: An Environmental Fable attraction at Epcot [1].

Eventually, Disney CEO Michael Eisner suggested that the show could be about insects, due to the fact that they were also a part of the Animal Kingdom, and they often lived under trees[1]. Eisner went on to say that the film could tie in with the Pixar movie "A Bug's Life" which was set to be released seven months after the park opened [2]. Imagineers liked the idea and they began to develop a show around the Bugs Life characters. Unfortunately, Pixar Studios was unable to help create the film for Imagineering as they were busy finishing A Bug's Life [2]. Instead, Disney turned to Rhythm & Hues- a special effects studio that specializes in CG [2]. Finally, on April 22, 1998 "It's Tough to be a Bug!" opened with the rest of Disney's Animal Kingdom. Since its opening the attraction has not seen any major changes.

The Queue music for the It's Tough to be a Bug! features six parodies of famous songs from Broadway shows. The songs played in the queue are: 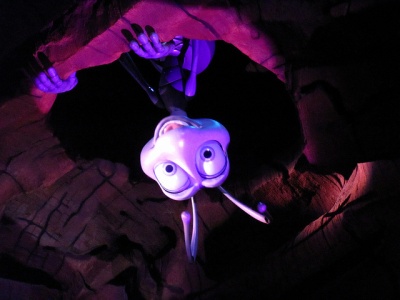 It's Tough to be a Bug! is hosted by Flick from the Disney-Pixar film A Bug's Life. Photo by Lauren Javier

It's Tough to be a Bug! opens with Flick the ant being announced as the host of the show. Flick begins by pointing out to the guests that despite the enormous amount of bugs in the world, humans don't seem able to see bugs. In order to help them, he tells everyone to put their Bug Eyes (3D glasses) on, so that they can see the bug world. After guests put their glasses on, a group of butterflies appear on screen forming a curtain, before flying apart to reveal Flick.

As Flick begins to talk about the various survival techniques that bugs have, a Chilean Tarantula named Chili sneaks up behind him. The tarantula is friendly however, eventually apologizing for starling the ant. After saying it’s okay, Flick goes on to explain to guests that Chilean Tarantula's shoot poison quills at their enemies, "with deadly accuracy". To show off his skills Chili uses a wooden slingshot to shoot acorns, which he then breaks apart with his quills. The beetles that are holding the acorns eventually cause Chili to miss however, and the quills fly into the audience.

After Chili leaves the stage in anger, Flick introduces a termite who defends his home by shooting acid. After a flea begins mocking the termite, he shoots him with a ball of acid before declaring that he "detects more intruders" (the audience). Despite Flick's best efforts, the termite shoots acid at the audience, before eventually running out. The third guest that Flick introduces is a stinkbug named Claire de Room, who is prepared to aim her stench at a flower. When an Acorn Weevil gets stuck in the flower and moves it near the audience however, the bug hits the audience with its "stench".

At this point in the attraction, the evil grasshopper Hopper breaks into the show. As Flick tries to explain that the humans in the audience are his friends, Hopper yells that humans are a bug’s worst enemy. He subsequently instructs a Rhinoceros beetle to attack the ant. Hopper then shows an exterminator poster as his evidence for human's being bugs enemies. To further his case, the grasshopper shows guests clips from black and white horror movies which depict bugs in monstrous ways, including: a tarantula destroying a house, military men fighting giant grasshoppers, fireflies scaling large buildings, and a man fighting giant ants on a boat. As the montage ends, a fly is hit three times with a fly swatter; while Hopper tells guests that it's time they got a taste of their own medicine. He then declares "This means war!" as the audience is sprayed with bug spray. As the theater goes dark, the audience is "attacked" by hornets and black widow spiders who are trying to get their revenge. Hopper then appears on screen, telling the bugs to leave guests to him and declaring that nothing can stop them. As he says this, a large chameleon sneaks up behind the grasshopper, temporarily eating him before spitting him out and chasing him away.

A bug can then be heard backstage telling Flick that the next act, "refuses to come out of his cocoon". Upon hearing this, Flick decides to cue the show’s finale, before quipping "Did I forget to mention reptiles". A group of bugs then begin singing the show's theme song "It's Tough to be a Bug". In the song, bees, dung beetles and dragonflies sing about all of the good things that they do, before they all exit the screen, chasing after a cupcake. Flick then concludes the show by saying, "And now that your all honorary bugs, remember, a magnifying glass is for looking at little things, not for burning little things," as the butterfly curtain closes.

As guests exit the theater, the announcer tells guests to remain seated so that beetles, maggots and cockroaches can leave the show safely. 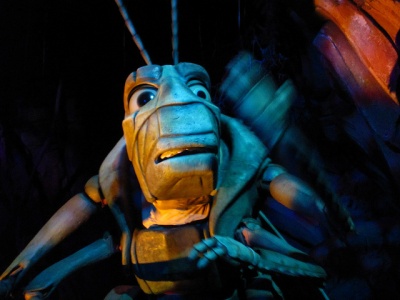 Hopper in It's Tough to be a Bug! Photo by Lauren Javier