After the project was green lit, Imagineers went to the Los Angeles County Fair to play Midway games and see how they worked [2] [1]. Their next task was coming up for a ride system to use in the attraction. Although initial plans called for a system similar to Buzz Lightyear's Astro Blasters, which had all the guests moving in one direction at the same speed (similar to Buzz Lightyear's Space Ranger Spin in Walt Disney World[1]), Imagineers quickly realized that this ride system would not meet capacity demands. In order to solve this issue, Imagineers created a completely new ride system that allowed guests to rotate 360 degrees while utilizing different interactive screens[1].

The attraction finally opened as Toy Story Midway Mania! on May 31, 2008[1]. Since Toy Story Midway Mania opened, the attraction has seen a relatively few number of changes. In conjunction with the release of Toy Story 3, in May 2010, Toy Story Mania was updated. At this time, "Rex and Trixie's Dino Darts" replaced "Bo Peeop's Baaa-loon Pop"[3].. Furthermore, the character Buttercup was added to the "Hamm & Eggs" game[3]. Finally, Trixie, Buttercup, Dolly, and Mr. Pricklepants were added to the prize scene, Lotso was added to the practice round, and the game scores at the end of the attraction were changed so that they now showed guests new categories including: 'Best In Vehicle', 'Best This Hour' [3]. In May 2016, Toy Story Mania received a third track in an effort to reduce wait times [4].

According the backstory of the Toy Story Midway Mania!, when guests enter the queue for the attraction, they are shrunk down to the size of a toy. To reinforce the feeling this feeling, giant game pieces, crayons, and toys including a Barrel of Monkeys, View-Master reels and Little Golden Books can be found. The music in the queue was arranged and recorded by Jennifer Hammond who recorded over an hour of music based on the scores for the first two Toy Story films [7]. 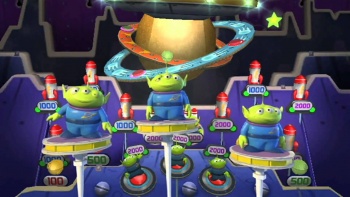 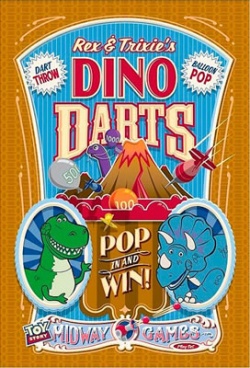