Captain EO is an attraction located in the Imagination! pavilion at Epcot.

Captain EO got it's beginning when Michael Jackson's adviser, David Geffen called Disney. The pop singer was coming off the blockbuster album “Thriller” and Geffen thought that Jackson (a huge Disney fan) should make a movie for the company. To facilitate the partnership, Geffen called his longtime friend (and head of the Disney Studio) Jeffrey Katzenberg and pitched his idea. Although Disney was interested, Katzenberg and Michael Eisner asked Jackson if he would instead make a movie/music video for Disneyland. Imagineer Rick Rothschild then drew up three different story lines, before both he and Jackson picked the same one to do- Captain EO.

As part of his agreement to do the attraction, Jackson insisted that either George Lucas or Steven Spielberg be involved in the project. Since George Lucas was already working with Disney to create Star Tours, he was brought in to work on the new film. Joining him, was director Francis Ford Coppola, actress Angelica Houston, and Rusty Lemorande (who wrote the screenplay with Lucas). Famed composer James Horner wrote the score for the film, and cinematographer Vittorio Storaro worked the lighting and photography. Jackson also wrote two new songs for the attraction, "We Are Here to Change the World" and "Another Part of Me". The movie was shot in 3D, and in-theater effects were used to enhance guest’s experience. Because of these effects, many consider Captain EO to be the first 4D film ever created.

The production of Captain EO was not an easy one. Although the initial budget for the film was 11 million, it ended up costing 23.7 million dollars to make. This was due to the fact that production had begun on the attraction without a firm plot. Another problem with the production was that while Coppola was there for the three weeks of principal photography, it took the rest of the production crew nearly six months to try to complete the story. Further complications then arose, when the in theater effects were not in sync with the film. The attraction finally opened in the Journey Into Imagination pavilion's Magic Eye Theater on September 12, 1986.

On July, 6 1994, following a decrease in both the film and Jackson's popularity, Captain EO was replaced by a new 4D film Honey, I Shrunk the Audience. Although now without a home in the Disney Parks, MTV showed the film (in regular 2D) on June 26, 1996 (the only known time the film was shown outside of Disney).

On July 2, 2010, following the death of Michael Jackson, Captain EO returned to Epcot as a tribute to the late singer. The film replaced Honey, I Shrunk the Audience almost exactly 16 years after its initial closure. Although the film had returned however, many of the original in-theater effects were removed when Honey, I Shrunk the Audience was built, and thus they are not used in the second version of Captain EO.

The preshow for the second incarnation of Captain EO, consisted of the made for TV special "The Making of Captain EO". The documentary was directed by Muffett Kaufman and hosted by Whoopi Goldberg. The film showed interviews with cast, crew and the producers of the film. 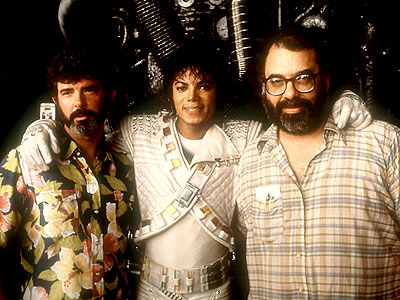 Captain EO begins with a male narrator setting the scene. He tells guests:

"The cosmos: a universe of good and evil where a small group struggles to bring freedom to the countless worlds of despair; a rag-tag band led by the infamous Captain EO."

A two headed alien pilot is then shown talking to itself. One head is name Idey while the other is named Ody. The two discuss how the planet they are approaching does not look dangerous, before divulging that they are looking for a homing beacon. Idey and Ody then tell Hooter (a small elephant looking creature) that they have almost arrived. Hooter, and a robot named Major Domo, tell the pilots not to get too close or they will trip an intruder alert. Just as Idey and Ody say that they "won't blow it", the intruder alarm goes off. As the two try to blame Hooter for their mistake, Captain EO (Michael Jackson) rises up on a platform and tells them that they are "going in". Major Domo then tells the captain that their ship is not in a condition to fight, when Captain EO replies:

Hooter! Listen! The Command considers us a bunch of losers. But we're gonna do it right this time, 'cause we're the best. We don't we'll be drummed out of the corps.

All the members of his crew then assure themselves that they will not fail, however Idey and Ody quickly inform the captain that an enemy patrol ship is flying by. Although Captain EO initially tries to outrun the patrol, they are hit by the ship's lasers. Alarmed, Captain EO asks for the map of the planet, only to find that Hooter ate it. At this point, Captain EO's superior, Commander Bog, appears on a holographic screen and demands to know what is going on (as Captain EO was late checking in). When the Commander begins to realize that Captain EO is in combat against orders, Hooter throws something that sticks to the holographic image, obscuring Bog's vision and keeping him from realizing what's happening. Hooter then brings in the ship's sail, just before the ship enters a tunnel. Despite their best efforts however, the ship still crashes onto the planet. After crashing, Captain EO discovers that they have “landed” right next to the homing beacon, a fact that he is able to report to the Commander. Commander Bog then gives EO further instructions, saying:

Well, so far, so good, Captain EO. But, I must admit that I am a bit surprised after the mess you made of your last mission. But now that you've found the beacon, take the map, find the Supreme Leader and give her the gift. You do have the map, don't you? 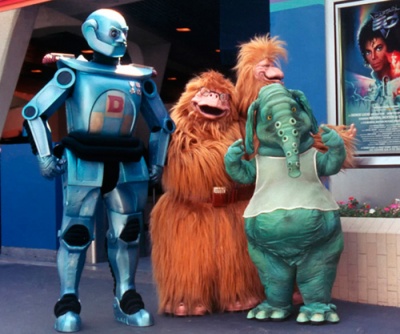 Although Hooter had earlier eaten the map, the crew sets out to find the Supreme Leader. As they walk through a hill of garbage (and Hooter insists on putting a trash can on his head to "disguise" himself), the team is ambushed by guards and taken to the Supreme Leader. After arriving, The Supreme Leader (a metallic woman hanging from the ceiling by cables) orders the crew be turned into trash cans, while Captain EO is to be tortured for 100 years in her deepest dungeon. An unfazed Captain EO announces that they accept their punishment, but tells Supreme Leader that she is beautiful and it is his gift to her to unlock that beauty. EO then points to his ear, cuing the crew to get ready. At this point, music begins and Minor Domo transforms to a keyboard synthesizer. During the transformation, the robot kicks off his leg which transforms into a guitar played by Fuzzball (a flying furry creature), and the rest of his body becomes a drum set played by Idey and Ody. Just when everything seems to be going according to plan however, Hooter slips and crashes into the synthesizer. The Supreme Leader then sends her troops in, but Hooter fixes the synthesizer just in time and begins to play. With this, Captain EO is energized, and he pushes away the guards with a pulse of energy.

At this point, "We Are Here to Change the World," (a song written by Michael Jackson specifically for the film) begins. During the introduction Captain EO transforms various minions of the Supreme Leader into dancers that join him in the song. Eventually, the Supreme Leader sends in her "Whip Warriors" (two soldiers who attack Captain EO with electronic whips) while "We Are Here to Change the World" quietly continues in the background. Although he struggles for a while, Fuzzball ties the two whips together, incapacitating the warriors and allowing Captain EO to use his energy powers on them. Captain EO then transforms the prisoners trapped in the walls into another group of dancers, as the song continues in full force. Captain EO next flies up to the Supreme Leader and transforms her into a beautiful woman, before using his energy to transform the lair into a beautiful palace with Greek columns. With the sun now shining, everyone celebrates as “Another Part of Me” (the second original song in the film) is performed. The film then ends with the triumphant crew flying off towards their next mission.