At the 2009 D23 Expo, Disney announced that a second Dumbo the Flying Elephant carousel would be built in order to increase the ride's capacity [7]. By 2011 however, plans for the Fantasyland Expansion had changed. 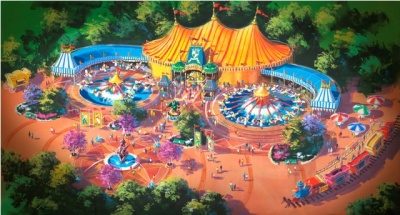 Disney instead announced that a new area called Storybook Circus would be created in the location formally occupied by Mickey's Toontown Fair (In 2009 Disney had announced plans to construct Pixie Hollow, a Tinkerbell themed area in this location) [8] [9]. Storybook Circus took its inspiration from the circus scenes in Dumbo, and fittingly Disney further announced that Dumbo the Flying Elephant would be relocated to this new area [10]. As part of this relocation, not only would a second Dumbo carousel be constructed, but the attraction would also receive a covered interactive queue [11].

Inside the Dumbo the Flying Elephant queue. Photo Disney.