Germany is a pavilion located within World Showcase in Epcot. It is located between the China and Italy.

During the initial development of World Showcase, Imagineers knew that Germany would be one of the countries represented. Between American's familiarity with the country, the opportunity to create an Oktoberfest dining location, and a plethora of German companies interested in sponsorship, Germany seemed like a perfect fit for EPCOT Center [1]. One mitigating factor in the pavilion's creation however, was the fact that at the time Germany was still a divided country. Although this division was not represented in any official sense, Imagineers based the pavilion on West Germany, specifically Bavaria and the other surrounding German states[1]. 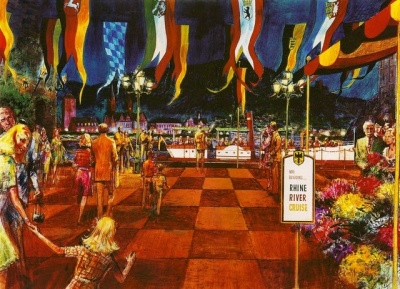 When designing the Germany pavilion, Imagineers drew on Southern Germany's Baroque architecture[1]. The pavilion is made up of architectural styles from the 13th through the 17th century. Because of this, the structures in Germany do not feature aspects of modern construction. Initially, Imagineers had planned on constructing a boat ride attraction titled Rhine River Cruise in the pavilion. This ride would have taken guests on a historical tour, down the Rhine River, where they would experience Germany’s history and culture [2]. Along with this feature attraction, plans for the pavilion also called for a tourism area to be built, which would have held small exhibits and a travel agent who would help guests plan a trip to Germany [3]. While neither the Rhine River Cruise nor the tourism area were a part of the Germany pavilion by opening day, a large show building was constructed for the River Cruise's loading and unloading areas, with the idea that the attraction would open at a later date as a part of EPCOT Center’s Phase II [2]. According to the 1982 book “Walt Disney's Epcot Center: Creating the New World of Tomorrow”:

"The future River Ride promises to be as enjoyable as it is informative. An early concept has visitors boarding a "cruise boat" for a simulated ride down the Rhine and other rivers, the trip affording a visual impression in miniature of the cultural heritage of Germany's past and the highlights of its present. Among the detailed models envisioned are scenes in the Black Forest, the Oktoberfest, Heidelberg, the industrial Ruhr Valley, the possibilities are limited only by the planners' imaginations." [4])

The Germany pavilion, sans the Rhine River cruise and the tourism area, opened with the rest of EPCOT Center on October 1, 1982. The pavilion is themed to look like a German plaza in Bavaria set in eternal Oktoberfest [3]. The platz, called St. Georgsplatz, features a large clock tower, a central fountain which is guarded by a statue of St. George (the patron saint of soldiers) and a dragon, as well as various storefronts [3]. Shops that opened with the pavilion in 1982 included: Glas und Porzellan (a ceramic and glassware shop), Porzellanhaus (a china shop), Süssigkeiten (a bakery), Weinkeller (a wine shop), Der Bucherwurm (a bookstore), Volkskunst, and Der Teddybär. The pavilion also included the Biergarten restaurant.

Since Germany opened in 1982, the pavilion has seen a substantial amount of changes. In 1988, a small crystal cart was added to the pavilion [5]. The next year, in 1989, Porzellanhaus was renamed Die Weihnacts Ecke, which features predominantly Christmas decorations [6]. Also in 1989, a sign that the planned Rhine River Cruise was perhaps shelved came when the counter service Sommerfest restaurant opened near the Biergarten [6]. Sommerfest opened in front of the planned location for the Rhine River Cruise's entrance. When the Germany pavilion originally opened, guests could see a large set of doors that led to the attraction's partially built show building. Today, If guests go to the back of Sommerfest, they will find a large mural painted on the wall. This wall replaced the original Rhine River Cruise doors. In a similar fashion, in 1990, a new shop called Kunsterbeit in Kristall opened in the location formally earmarked for a German tourism office [1].

In 1995, to celebrate the International Flower and Garden festival[7], a miniature railroad display called the Garden Railroad was erected in the Germany pavilion [8] . After being set up and torn down for a series of festivals, the display proved to be so popular that Disney decided to leave it up year round. Subsequently, in 1999 Der Bucherwurm was replaced by Das Kaufhaus, which sells various sportswear [6]. The next change came in 2002, when Glaskunst opened in the Germany pavilion's former WorldKey location [5]. At this time, the crystal cart that had opened in 1988 closed.

On June 29, 2009, the Germany pavilion got a proper meet and greet area for the pavilion's popular Snow White interaction [9]. Another opening day shop, Glas und Porzellan was closed in 2010 (after sponsor Goebel did not renew their contract) and the location became Karamell-Kuche (a confectionery) [6].

On April 07, 2016, Germany got a new outdoor stage [10]. Since the stage opened, musical acts have performed throughout the day in Germany at this location. 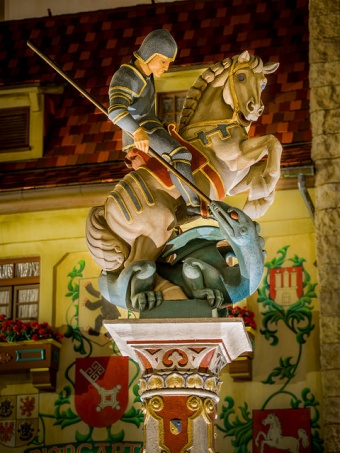 The statue of St. George that sits in the center of the Germany pavilion. Photo by Norm Lanier.

The Germany pavilion is centered around a large outdoor plaza called St. Georgsplatz. The square is overlooked by two large structures. The most prominent, is the pavilion's large clock tower, which was modeled after towers found in the German city of Freiburg. Secondly, a large medieval castle looms over the square. This fortress was modeled on two 12th century castles, Burg Eltz (which is located on the Elzback River) and Burg Stahleck (which is located on the Rhine). The center of the square features a fountain guarded by a statue of St. George and the dragon. Surrounding the plaza is the Germany pavilion's stores, whose exteriors were based on real buildings. The interior of each of the original Germany pavilion shops, were designed to compliment the merchandise sold within. Shops currently found in the Germany pavilion include- Der Teddybär, Die Weihnachts Ecke, Karamell-Kuche, Weinkeller, Kunsterbeit in Kristall, Volkskunst, Das Kaufhaus, and Glaskunst.

The final structure in the Germany pavilion, is the three story Biergarten restaurant, which was initially designed to hold both the restaurant and the unbuilt Rhine River Cruise. Currently, the exterior facade features two archways, one which leads Biergarten and the second which leads to Sommerfest, a counter service restaurant.

At this time, the Germany pavilion does not feature any attractions.

Sommerfest- This counter service restaurant specializes in bratwurst, as well as other German cuisine. 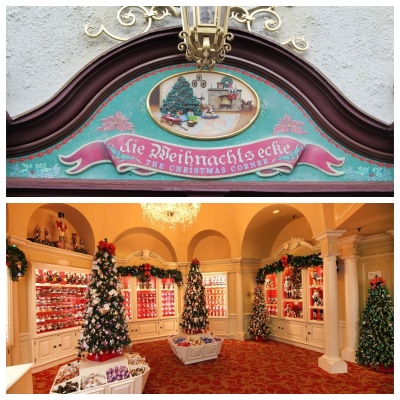 Die Weihnachts Ecke opened in the Germany pavilion in 1989.

Karamell-Kuche- This confectionery sells caramel and other candies. Sponsored by Storck USA, the store replaced Glas und Porzellan in 2010. The name Karamell-Kuche is translated to "Caramel-Kitchen" in English.

Weinkeller- This wine store allows guests to buy over 50 kinds of vintage German wines, as well as taste over 20 varieties. Weinkeller translates to "Wine Cellar" in English.

Das Kaufhaus- This shop sells various athletic wear, including merchandise by Puma. Das Kaufhaus opened in the former location of Der Bucherwurm in 1999.

Stein Haus-True to its name, this store sells beer steins and other beer related merchandise. Stein Haus opened in the former location of Süssigkeiten.

Glaskunst- This small shop sells glassware, crystal, and even personally engraved steins. Glaskunst opened on March 3, 2002, in the former location of Germany's WorldKey kiosk. At this time, the glassware kart that had resided in the Germany pavilion closed.

Porzellanhaus- This store sold Hutschenreuther porcelain. Porzellanhaus opened on October 1, 1982 and closed in 1989, before reopening as Die Weihnachts Ecke.

Süssigkeiten- This shop sold cookies and other sweets. Süssigkeiten originally opened on October 1, 1982. It was replaced by Stein Haus.