China is a pavilion located within World Showcase in Epcot. It is located between the Norway and Germany.

Throughout the initial development of World Showcase, two communist countries were interested in sponsoring their own pavilion- the Soviet Union and China [1]. Unlike the USSR, which wanted to integrate the ideals of communism into their pavilion, China was willing to showcase its history and culture without involving ideology [1]. Despite this, Disney did not originally plan on having China be in an opening day pavilion [2]. Instead, the plot of land that would eventually hold the China pavilion was occupied at various times by a Scandinavian Showcase pavilion, a Costa Rica pavilion, or even left empty [2]. By 1979, Imagineers planned on constructing a Morocco pavilion on the plot[2]. As these plans were pushed to the back-burner however, China was pushed to the forefront and would now be built in time for EPCOT Center's opening day.

In order to help showcase the diversity of China, plans for the pavilion called for a CircleVision 360 film called Wonders of China to be filmed. To create the movie, Disney entered negotiations with Chinese government over where they could and could not film [3] Although Disney, and director Jeff Blyth, were initially given tight filming restrictions, the company and China eventually came to an agreement where Chinese film crews would film the country's more “sensitive” areas, where the government did not want Westerners to go (such as Tibet and the Great Wall) [3]. 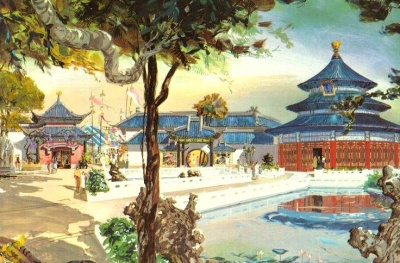 Concept art for the China pavilion.

The China pavilion opened with the rest of World Showcase on October 1, 1982. When the pavilion opened it featured the aforementioned CircleVision attraction Wonders of China, as well as two shops, various gardens and House of the Whispering Willows gallery, which would eventually house authentic Chinese artifacts. The center piece of the China pavilion is a replica of the Hall of Prayer and Good Harvests, which is part of the Temple of Heaven complex located southeast of central Beijing. The replica found in the pavilion was built at ½ scale and designed so that guests had to enter the Hall before seeing Wonders of China.

The first major addition to the China pavilion came in 1983 when the Yong Feng Shang Dian (Bountiful Harvest) store opened [4]. The following April, the House of the Whispering Willows gallery got over fifty artifacts from the Republic of China's Palace Museum [5]. Throughout the pavilion's history, the contents housed within the gallery have changed.

When the China pavilion opened in 1982, the land adjacent to it was initially earmarked for the planned Denmark pavilion and featured only manicured lawns. When plans for that pavilion fell through however, the China pavilion was expanded [6]. As part of the mid 1980s expansion, on September 24, 1985, the counter service Lotus Blossom Café opened. [6] This was shortly followed by the opening of the table service restaurant Nine Dragons on October 23, 1985 [6].

The next major change to hit the China pavilion came in 2003, when Wonders of China was updated. New scenes and a new narration were added to the film, before it reopened to the public on May 22, 2003 as Reflections of China [6]. Subsequently in September 2007, the Joy of Tea stand opened in the pavilion [7]. In 2008, both of China's restaurants- Nine Dragons and the Lotus Blossom Cafe were renovated. During the refurbishment, both facades were rethemed to make the restaurants appear more modern [6]. A similar refurbishment then took place in 2011 for the pavilion’s shopping venues [8] [9]. At this time, Yong Feng Shangdian was renamed the House of Good Fortune and given a new layout, decor, and merchandise [8].

At the 2017 D23 Expo, Walt Disney Imagineering's Vice President and Senior Creative Executive Tom Fitzgerald announced that Disney would be creating a new Circle-Vision film for the China pavilion. According to Disney, the new film will be the first shot using a "next-generation digital camera system" [10]. Subsequently, on August 25, 2019, Disney announced that a new film titled Wondrous China would be coming to the China pavilion, although an opening date was not announced [11].

The entrance to the China pavilion is decorated by three large rocks and several stone benches. This was done to represent the ancient Chinese belief that unusual rock formations brought inner peace and serenity. Guests then enter the pavilion by walking beneath the Zhao Yan Men (meaning "Gate of the Golden Sun), a replica of a gate found at the Summer Palace, which is located nine miles north of central Beijing. After entering the pavilion guests come across a lotus pool surrounded by a typical Chinese garden. Continuing on, guests walk down the pavilion’s main walkway, the “Street of Good Fortune”, which was inspired by the roadways found in Beijing. In fact, Disney Imagineers intentionally made the path more narrow than guest capacity would dictate; in order have guests experience the crowded conditions of modern China.

The China pavilion is home to the Hall of Prayer and Good Harvests, which guests must enter to view Reflections of China. Also located in the Hall is the House of the Whispering Willows gallery, which features various authentic Chinese exhibits. The China pavilion features three dining locations- Nine Dragons (a table service restaurant), Lotus Blossom Cafe (a counter service restaurant) and the Joy of Tea stand. Finally, China also houses to two shops, The House of Good Fortune and Good Fortune Gifts which both sell authentic Chinese merchandise. 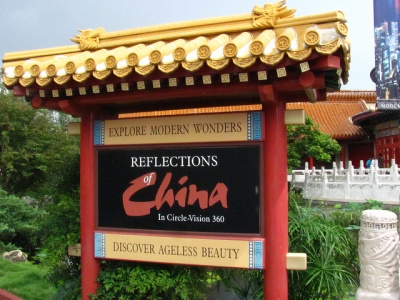 Reflections of China can be found in the China pavilion.

Reflections of China- This CircleVision 360 film gives guests a breathtaking tour of China. The entrance to the film is located inside the Hall of Prayer and Good Harvest.

Joy of Tea- This quaint stand located on the shore of the World Showcase Lagoon specializes in various teas.

Jeweled Dragon Acrobats- Young performers from the Pu Yang Academy of Acrobatics in China entertain daily in the China pavilion.