From The Mickey Wiki: Your Walt Disney World Encyclopedia!
Jump to: navigation, search
Norway is a pavilion located within World Showcase in Epcot. It is located between the Mexico and China pavilions.

Although the pavilion was not present on the park's opening day, a shortage of restrooms in World Showcase led Disney to create Danish themed restrooms on the plot allocated for Denmark, with the idea that the rest of the pavilion would eventually be built around these structures. One year later, in 1983, the Washington Post reported that Disney was still in discussions with LEGO about sponsoring the pavilion [2].

By late 1983, however, plans for an autonomous Denmark pavilion where shelved in favor of a new "Scandinavian Showcase". On October 3, 1983, Disney announced that it had reached an agreement with Scanshow A/S (a subsidiary of the Norwegian company Selmer-Sande and Kloster) to create the new pavilion [3]. Scandinavian Showcase, which would represent Norway, Sweden and Denmark, was to be built in-between the France and United Kingdom pavilions, with Imagineers Claude Coats and Tim Brunner tasked with heading the project [4]. Aesthetically, the Scandinavian Showcase pavilion was to be made up of architecture from all three of the represented counties. Egeskov Castle and houses from Odense and Copenhagen would represent Denmark, Stockholm Stadshus and buildings from Gamla Stan would represent Sweden, and finally Bryggen i Bergen and Akershus Festning would represent Norway [3]. By 1984, plans for the pavilion were were nearing completion, with a planned opening date of 1987 [4].

Of the three countries that were to make up the Scandinavian Showcase, only Norway provided the funding necessary to create the pavilion. Because of this, the focus of the pavilion shifted away from Scandinavia as a whole and solely to Norway. At this time, the name of the pavilion changed to "Norway: Gateway to Scandinavia". In order to fund the pavilion, an organization named NorShow as formed by the Norwegian companies: Aker, Norsk Data, Norway Foods, Den norske Creditbank, Det Norske Veritas, Frionor, Kosmos, Vesta Group, Selmer-Sande, SAS and VARD [3]. Their funding, combined with contributions from the Norwegian government, raised $34 million dollars for the pavilion. This paid for more than two-thirds of the pavilion's cost, with Disney picking up the rest. The Norway pavilion was then designed and built by Walt Disney Imagineering, with the help of Scandinavian architects. At this time, One point of contention between Disney and NorShow, involved the pavilion's lighting. The other World Showcase pavilions were wired to a grid that allowed them to light up during the park's nighttime firework show (originally Laserphonic Fantasy, soon to be Illuminations). While NorShow believed that the spilled light from the Mexico and Canada would suffice, Disney knew better, but was unwilling to pickup the cost (assuming that NorShow would cave) [3]. With neither entity willing to budge, Norway was built without the nighttime lighting given to the other World Showcase pavilions.

Construction on the Norway pavilion began on May 27, 1986, when Minister Kurt Mosbakk laid the pavilion's foundation. When constructing the pavilion, Norway's exterior was overseen by architect Birger Lambertz-Nilsen, while the interior was under the responsibility of Ulla S. Ujort. On June 3, 1988, the Norway pavilion was officially dedicated by Crown Prince Harald V and his wife Sonja. The opening ceremonies were broadcast in prime time to all of Norway on the station NPK. At the dedication Harald V declared:

"Ladies and gentlemen, wishing the best of luck to Disney World and those who will be responsible for the operation of the pavilion, I hereby declare the Norway pavilion open. Thank you"

When Norway opened, the pavilion featured 58,000 sq ft of interior space [1]. When complete, Norway consisted of a Stave Church (which holds various exhibits), the original 1982 Denmark bathrooms, a counter service restaurant named Kringla Bakeri OG Kafe, the table service Restaurant Akershus, and a series of interlinked stores including the Puffins Roost and Fjording [1]. The star of the pavilion, however, was the not yet operational Maelstrom attraction. EPCOT Center's first thrill ride, Maelstrom would not welcome its first guests until July 5th [5]. Initially, the boat ride attraction was to be titled SeaVenture, and early in its development the plot was to focus on Norway's mythology, as guests searched for a rainbow bridge to Valhalla. This concept was eventually broadened, so that Maelstrom instead took guests on a trip through the country's history, beginning in folklore and ending in modern day Norway[1]. After disembarking from Maelstrom, guests could watch the Spirit of Norway film, before exiting into the pavilion's shops.

Outside of changes to the pavilion's Stave Church exhibits, the first major change to the Norway pavilion occurred in 1992, when NorShow ended their sponsorship of the pavilion. At this time, the Norwegian government assumed sole sponsorship of the pavilion, contributing $200,000 a year until ending their sponsorship in 2002. Since that time, the pavilion has remained sponsorless. The first real addition to Norway, came in 1998, when a new outdoor playground shaped like the famous Viking ship "Osenberg" opened to guests [6]. In 2005, Norway's Restaurant Akershus, changed its name to Akershus Royal Banquet Hall and began offering character dining [7]. More changes to the pavilion occurred in 2008, when the pavilion's live band “Spelmanns Gledje” ceased their performances 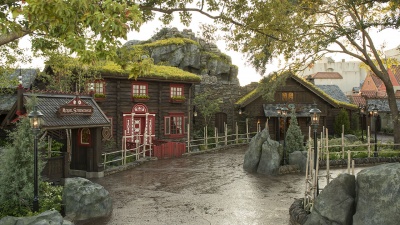 The 2016 expansion of Norway made room for Anna and Elsa’s Royal Sommerhus. Photo credit: Disney
[8] [9] and the pavilion's outdoor playground was removed[10].

Following the massive success of the 2013 Disney film "Frozen", the Norway pavilion began to be infused with characters from the film. The integration of Frozen into the Norway pavilion began in late 2013, when the exhibit “Norsk Kultur, Inspiration for Disney Frozen” replaced the "Vikings, Conquerors of the Sea" exhibit in the pavilion's Stave Church [6] and Frozen merchandise began to appear in the pavilion's shops. Subsequently, on October 5, 2014, both Maelstrom and the Spirit of Norway closed in order to make way for a new Frozen attraction titled Frozen Ever After[11]. During the renovations, the Norway pavilion was also expanded into an adjacent lot in order to facilitate the construction of a new Frozen meet and greet. This new area, which opened June 17, 2016, features a small courtyard consisting of Anna and Elsa's Royal Sommerhus (the meet and greet), the Wandering Reindeer shop, a small stage, and expanded restrooms [6].

On June 21, 2016, Frozen Ever After officially opened to guests [12]. On the new boat ride attraction, guests take a tour through the kingdom of Arendelle on a “Summer Snow Day”, with Queen Elsa, Anna, Olaf, Kristoff and friends.

Since the opening of Frozen Ever After, the Norway pavilion has not seen any major changes. In 2018, however, the pavilion's Stave Church received a new exhibit titled "Gods of the Vikings", which replaced the “Norsk Kultur, Inspiration for Disney Frozen" exhibit [13].

Frozen Ever After- On this boat ride, guests are invited to celebrate a special “Summer Snow Day” with Elsa, Anna, Olaf and other characters from Frozen. 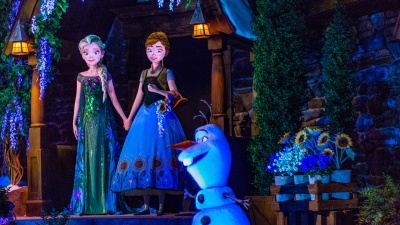 Frozen Ever After opened to guests in 2016

Maelstrom- This boat ride attraction took guests on a historical tour of Norway. The ride began within the ancient folklore of Norway’s past, and ended in modern times. Along the way guests encountered trolls, fell down a waterfall, and sailed through a North Sea storm. Maelstrom operated from July 5, 1988 until October 5, 2014.

The Spirit of Norway- This travelogue film allowed guests to get an idea of the many things that "modern" Norway had to offer. Guests viewed the film after exiting Maelstrom. The Spirit of Norway film was shown from July 5, 1988 until October 5, 2014.

Puffin's Roost- This large store sells all kinds of authentic Norwegian merchandise. Here guests can by items ranging from viking helmets to perfume and everything else in between.