France is a pavilion located within World Showcase in Epcot. It is located between the Morocco and The United Kingdom.

While the France pavilion was also going to be a part of World Showcase, the pavilion’s design and layout changed many times throughout its development. Early designs of the pavilion show that theater which would eventually house Impressions de France was at one time going to be round [1]. This design suggests that Imagineers may have originally intended the film to be a CircleVision 360 film, although this in unconfirmed. According Richard Beard’s book, Walt Disney’s EPCOT: Creating the New World of Tomorrow [2], the pavilion's layout was altered drastically before it was built:

“With the best will in the world, there was still not complete agreement among the EPCOT team during the planning of the France pavilion. One of the first concept sketches was of the Place du Tertre, the artists’ colony up near the cathedral of Sacré-Coeur. Then the Moulin Rouge and the Place Pigalle were considered, but the French advisers thought that was “tacky.” (It is; but tourists still love it.)

Sacré-Coeur itself, when they tried to build it to scale, looked rather Muscovite to a lot of people, with its onion-type domes. But the Eiffel Tower is unmistakable; it is one of a kind”

At one time plans for the pavilion also called for the creation of an animated map. Guests would be able to push a button on the map to learn about what was happening in the France's various regions including: the coasts of Normandy and Brittany, the skiing areas, the Riviera, and the wine country [1]. Another unused plan for the France pavilion called for an Exposition Hall based on Les Halles in Paris. The hall would have showed displays of France's provincial regions, as well as an information center [3].

Layout and History Since Opening 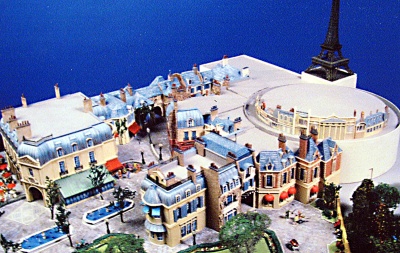 Concept Art for the France Pavilion, showing the Palais du Cinema as round.

The France pavilion opened with the rest of World Showcase on October 1, 1982 [4]. One way that guests can enter the pavilion is by crossing a metal bridge. The bridge is based on the Point des Arts (the first metal bridge in Paris) and the waterway that it crosses is meant to represent the Seine River [5]. The front pavilion is themed to look like Paris between the years 1871–1914, which is known as La Belle Époque (The Beautiful Age) in France [3]. The back of the pavilion on the other hand incorporates the small towns and provinces in France, in the form of “Le Petite Rue” a small, quaint street. The focal point of the pavilion is a re-creation of the Eiffel Tower, which was built at approximately 1/10 scale of the original [5]. Also of note is a park based on “A Sunday Afternoon on the Island La Grande Jatte” by the French artist Georges Seura [5]. Although the park is pleasant to look at, it is not accessible to guests.

In 2012, the France pavilion's bakery Boulangerie Patisserie closed and was moved to a new, larger building [9]. The restaurant eventually reopened on January 10, 2013 as Les Halles Boulangerie Patisserie, in its new location [10]. Subsequently, on May 30, 2013, L'Artisan des Glaces (an ice cream parlor) opened in the original Boulangerie Patisserie location [11]. More changes to France's restaurants came on December 10, 2012, when Bistro de Paris was replaced by Monsieur Paul [12]. Named after the famous French chef Paul Bocuse, Monsieur Paul offers a slightly less formal dining experience than its predecessor.

Besides its many restaurants and shops, the France pavilion is also home to the Impressions de France attraction. This film is shown in the Palais du Cinema, which was based on a theater in Fontainebleau [8]. Impressions De France is a travelogue which shows guests the various regions of France, while a score of classical music arranged by Buddy Baker plays [3].

On July 15, 2017, Disney announced that a version of the Ratatouille: The Adventure attraction from France's Disney Studios Park would be constructed in the France pavilion [13]. The new attraction is expected to open in time for Walt Disney World's 50th anniversary in 2021. Subsequently, on November 17, 2018, Disney announced that a new Beauty and the Beast sing along attraction would be coming to the France pavilion's Palais du Cinema [14]. The new film is expected to alternate showings with Impressions de France, and will not replace the classic film.

On August 25, 2019, Disney announced that The Beauty and the Beast Sing-Along film would be joining Impressions de France in the Palais du Cinema on January 2020 [15]. Furthermore, at this time, Disney announced that Remy's Ratatouille Adventure (the official name of the previously announced Ratatouille dark ride attraction) would open in the Summer of 2020, along with a new restaurant named La Crêperie de Paris [15]. 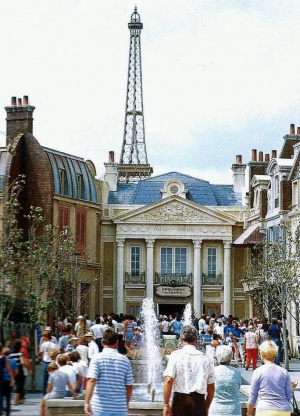 A small courtyard in front of the entrance to Impressions de France.

Impressions de France- This travelogue film showcases many of France's landmarks and landscapes on a 180 degree screen. The scenes in the film are set to a score arranged by Buddy Baker.

Remy's Ratatouille Adventure- This 4D attraction shrinks guests down to the size of a mouse and takes them on a whirlwind adventure through Gustave's kitchen.

Monsieur Paul- This table service restaurant is located on the floor above Chefs de France. From 1984 until 2012 the restaurant was known as Bistro de Paris.

Plume et Palette- This shop sells French fragrances, soaps and handbags. At one time guests could go to the second floor of the store and buy impressionist prints; however this floor is no longer open to guests.

Givenchy- This shop offers the entire line of Givenchy fragrances and cosmetics.

La Signature- This shop carries Guerlain fragrances for men and women. The shop was redesigned in 2007 to resemble the original La Maison Guerlain boutique in Paris.

La Casserole- This shop sold gourmet cookware and other housewares.