Beauty and the Beast Sing-Along

From The Mickey Wiki: Your Walt Disney World Encyclopedia!
Jump to: navigation, search
.

Beauty and the Beast Sing-Along is an attraction located in the France pavilion within Epcot.

Disney originally announced the creation of a Beauty and the Beast sing-along show for Epcot's France pavilion at the 2018 D23 Expo [1]. At this time, Chairman of Disney Parks, Experiences and Consumer Products Bob Chappeck announced that the new film would be shown in addition to the pavilion's current attraction Impressions de France, and that it would be produced by Don Hahn, who produced both the 1994 and 2017 versions of Beauty and the Beast [1]. When talking about Hahn's involvement, Imagineer Tom Fitzgerald noted:

“Don Hahn actually found some of the original animators. He knew where all the backgrounds were in the Animation Research Library. He knew the animators. He knew the voice talent. Don acting as our producer and director for this film had the connections to bring the original talent together. That’s why I think it looks so seamless, because he’s got a lot of the original talent working on our show. And making it seamless so that you shouldn’t know where original started and where new… you know, that was the goal.” [2]

On May 13, 2019, Disney announced that Beauty & The Beast Sing-Along would debut at the 2020 Epcot Festival of the Arts along with Awesome Planet, Canada Far and Wide, and Wounderous China [3]. Subsequently, in December of 2019, Disney revealed that the sing-along would feature a new twist, in that it would showcase LeFou as he attempted to play matchmaker for Belle and the Beast [4]. At this time it was also revealed that the film wold be narrated by Angela Lansbury (who voiced Mrs. Potts in the original film) and that the 14 minute film would feature five classic songs.

When discussing the return of Lansbury, Imagineer Marie Colabelli recalled:

“I don’t think that we could believe it. In talking with Don when we were wondering if it would be even possible, he was like ‘The best way to do it is just approach her and see what happens.’ And she was so thrilled and moved and very… this legacy to her is very close to her and so the idea that she would participate in something that we know is a classic within a classic, she was lovely.” [2] 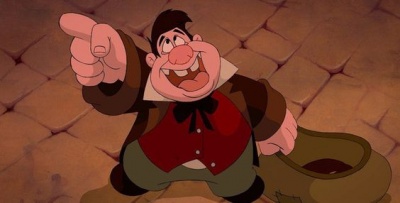 LeFou stars as the unlikely protagonist in Beauty and the Beast Sing-Along.

Beauty and the Beast Sing-Along is a retelling of the 1992 classic animated film, with a twist. In this version of the story, which is narrated by Angela Lansbury reprising her role of Mrs. Potts, LeFou gets fed up with Gaston's egotism and decides to play matchmaker for Belle and the Beast. To this end, the bumbling sidekick sends Maurice into the forest, helps prepare the feast depicted in Be Our Guest, plays violin during the song "Beauty and the Beast" and even warns the castle's inhabitants of Gaston and his posse's arrival. In addition to these new scenes, the film also features sing-along versions of five classic songs from the film. The songs included in the attraction are: