Peter Pan's Flight is an attraction located in Fantasyland.

Like many of Walt Disney World's opening day attractions, the history of Peter Pan's Flight began in the early 1950s as an idea for a Disneyland attraction. In 1954 Disney artist Herb Ryman created concept art for a Peter Pan attraction planned for Disneyland's Fantasyland. Included in the art were a Mermaid Lagoon scene, as well as a large rainbow that was never used. [1] In August 1954, Imagineer Marvin Davis completed a design for the "Peter Pan Fly Thru" attraction, which now included scenes showing Hangman's Tree and Crocodile Creek. This ride plan also had guests flying through openings in the face of Skull Rock. [2]. Of note is the fact that in both Davis and Ryman's plans, the ships that guests rode in moved counterclockwise. This is the opposite direction that the ships would move when the ride was actually constructed [1].

Besides coming up with the ride's general layout, Marvin Davis was also responsible for the unique ride system that the attraction used. Instead of having the vehicles run on a ground track, the ride vehicles were instead connected by a large rod to a track on the ceiling. By late 1954, a test track and ride mock-up were created by Bob Mattey and other Imagineers in the Special Effects shop building at the Walt Disney Studios [2].

In early 1955, Imagineers and artists Ken Anderson and Claude Coats were charged with painting the attraction and getting it ready in time for Disneyland's opening day. According to Anderson: 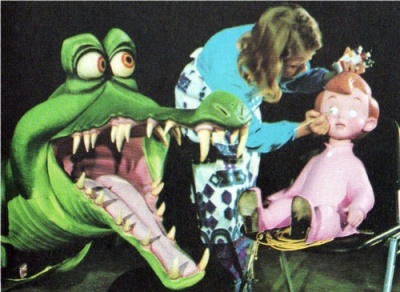 There wasn't time for a lot of preliminary planning, we just went in there and did them! We had already done the feature films, so the look, the story, even the key scenes were already thought out. We knew the theme and we knew how much space we had, so we just started in[2].

Peter Pan's Flight (as the attraction was eventually named) opened in Disneyland on July 17, 1955 [3]. Although very popular, initially Disney did not want to create a version of the attraction for the unbuilt Walt Disney World. Instead, Peter Pan's Flight was to be replaced by a Mary Poppins ride that took guests “flying” through various scenes from the movie [4]. Eventually however, due to either the cost of creating the new attraction, or guest expectations for a Fantasyland that was similar to Disneyland, it was decided to include an expanded version of Disneyland's Peter Pan's Flight in Walt Disney World [4].

With this task in mind, in February 1971, Imagineers Bill Justice and Bill Martin completed drawings for the Magic Kingdom version of the attraction [2]. Unlike the original Disneyland version where guests played the role of Peter Pan, in Walt Disney World's version guests would fly over various scenes from the movie. To this end, Audio Animatronics of Peter Pan, the Lost Boys, various pirates, and Indians were created for the Magic Kingdom version of the attraction. Scenes featuring: Wendy reading to the boys in the nursery, Indians in their camp, and a climatic duel between Captain Hook and Peter Pan were also added to the new attraction. Also included in the Florida version, was Captain Hook's 48 foot pirate ship where the duel takes place [2]. One final difference between the two attractions is that unlike Disneyland's Peter Pan's Flight, the ride vehicles in Walt Disney World use an omnimover ride system similar to the one used in the Haunted Mansion [5]. Peter Pan's Flight eventually opened on October 3, 1971, two days after the Magic Kingdom's grand opening [3].

Although Peter Pan's Flight hasn't seen any major changes since it opened, the attraction did debut a new interactive queue on January 29, 2015. Following the refurbishment, the queue is now themed so that guests enter the Darling children's nursery. While going through the nursery, Peter Pan and Tinkerbell pay guests a visit [6]. 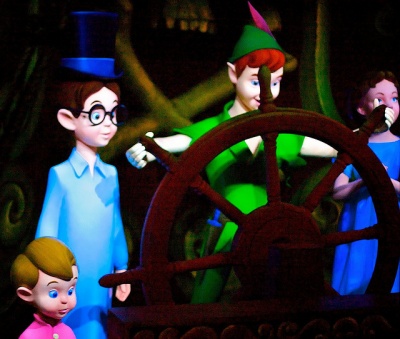 Peter Pan and the Darling kids celebrating their victory.

Peter Pan's Flight is a dark ride attraction that takes guests "flying" through the story of Disney's Peter Pan.

After walking through a covered queue that takes them into the Darling children's nursery, guests reach the attractions loading area. Here, guests board "aerial galleons" as they move forward into the show building. Behind them, a large mural of scenes from the movie can be seen. Before entering the building, the galleons are sprinkled with pixie dust, which causes them to begin to fly.

After ascending into the air, the first scene that guests see depicts Wendy reading to John and Michael as they go to sleep. In the background, guests can hear nursery music playing. Riders then hear Peter Pan say, "Here we gooooooo" as he and the Darling children fly out the window. As the group takes off into the night, guests can see Nana (the family’s dog) barking beneath them. Leaving the nursery behind, the galleons then fly over London, swooping just over Big Ben. As they soar over the city, riders can hear the song "You Can Fly" playing in the background. If guests look closely at the moon as they fly by, silhouettes of Wendy, John, Michael and Peter can be seen.

After flying over London, the children fly into Neverland. Below, Captain Hook orders his crew to fire upon Peter (and aerial galleons). As the galleons continue over Neverland, guests can see the Mermaid Lagoon, the Lost Boy's Camp, and Tiger Lilly's tribe far below. The next scene guests enter brings them up close to Captain Hook's ship, where they discover that Hook has taken Wendy, Michael, John and the Lost Boys captive. Nearby, guests can see the Tik-Tok Crocodile floating in the water. Peter Pan then arrives and battles Hook aboard his ship. After defeating the pirate and taking control of the ship, Peter and the Darling children are shown celebrating. In the water, the Tik Tok Crocodile can be seen trying to eat Hook, as the captain calls out for Mr. Smee, who is nearby in a row boat. The final scene in the attraction depicts Peter flying the Darling children back to London aboard Captain Hook's ship. Guests then arrive back at the loading area and exit the attraction.