Pizzafari opened with the rest of Disney's Animal Kingdom on May 22, 1998 [1]. At the time the park opened, the land that is currently known as Discovery Island was called Safari Village. Since Pizzafari opened it has seen a relatively few number of changes. On June 17, 2015, the restaurant discontinued its breakfast menu, due to the addition of Starbucks to the nearby Creature Comforts [2]. Subsequently in the Fall of 2015, Pizzafari (as well as the rest of Discovery Island) was given an aesthetic makeover. At this time, the color pallet of the restaurant changed, so that it now focused on earth colored tones. Furthermore, new signage and decorations were installed [3].

Pizzafari is divided up into six dining rooms, each with their own theme. The themes of the dining rooms are: the Home Room, Nocturnal Room, Upside Down Room, Camouflage Room, Four Seasons Room, and Bug Room [5]. 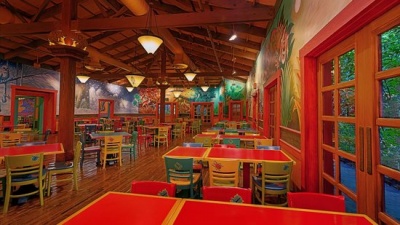 According to Disney historian Jack Spence, the background music in Pizzafari features the following songs: