Tom Sawyer Island is an outdoor area located in Frontierland.

The island that would eventually be known as Tom Sawyer Island, was originally a man-made construction that was completed before the Magic Kingdom opened in 1971 [1]. Although the island was present in the Rivers of America on opening day, it would not be until May 20, 1973 that the attraction opened to the public [2]. Following its opening, no major changes came to Tom Sawyer Island until 1996 when Fort Sam Clemens (which was located on the island) was renamed Fort Langhorn. The name of the fort was changed in order to tie in with Disney’s newest movie, “Tom and Huck” [3]. The next change to the island did not occur until 2005, when the “burning cabin” scene was turned off. The special effect (which made the cabin appear as if it was on fire) had to be suspended due to pipe corrosion, although the cabin and the settler located nearby are still on the island [4].

In order to get to Tom Sawyer Island, guests must board rafts from a dock in Frontierland. The rafts take guests slowly across the Rivers Of America to Tom's Landing (on the side of the island). Here guests can explore various scenes from the book "The Adventures of Tom Sawyer" by Mark Twain. When guests first get to the island they can read a sign that Tom himself wrote. The sign reads: 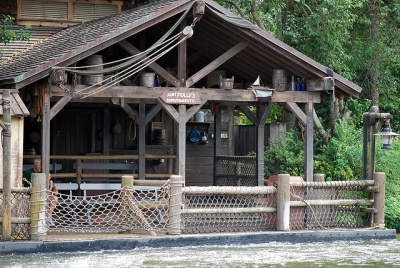 If guests travel counterclockwise around the island, the first major sight they will come across is Harper's Mill. The mill is a working grain mill, similar to the those that once ran on the Mississippi River. There are two different stories which tell how Harper's Mill got its name. One theory states that the mill is named after Imagineer Harper Goff who helped design both Disneyland and Walt Disney World. Another story states the mill is named after Joe Harper, who joined Tom and Huck when they ran away in Mark Twain's novel. It is probable that in the backstory of the attraction, the mill is named after Joe Harper, while its inclusion may have been a nod to Harper Goff.

Inside Harper’s Mill, a reference to the 1937 Disney short,"The Old Mill" can be found. In the cartoon, a strong thunderstorm begins to rage outside of a run down mill, which causes the gears inside the mill to begin to turn. Resting in the gear is a mother bluebird and her eggs, which it seems will surely get crushed. Luckily one the gears is missing one of its teeth, thus saving the bird. Like her cartoon counterpart, the bird inside Harper's Mill is never crushed

Around the corner from Harper's Mill, guests will come upon Aunt Polly's cottage. Here guests can sit and relax on a large, waterfront porch. A restaurant named Aunt Polly's Dockside Inn was once open here, but the restaurant closed for good in 2007 (although it briefly reopened in 2015). On the outskirts of the cottage, guests can see a fence that Tom convinced his friends Ben Rogers, Johnny Miller, and Billy Fisher to whitewash. Continuing on past Aunt Polly's cottage, guests will come upon the Scavenger’s Fort. Here, Tom and Huck have seemingly made a makeshift playground out of ship parts, lumber wood, and barrels (the roof of the fort is even made out of an old life boat).

Another point of interest on the island is Old Scratch's Mine, which guests explore. After traveling through the dark passage and hearing bats chirp overhead, guests will come upon a large deposit of glowing gems. Old Scratch was a pre-Civil War name for the devil, giving the mine a very ominous name. A sign outside of the mine reads:

"I have explored many old mines, but this un is the best ever! strange things happen in here so keep a sharp eye out and don't stop for nuthin!"

Near the entrance to Old Scratch's Mine, is Injun Joe's Cave. In the story “The Adventures of Tom Sawyer”, Tom witnessed Injun Joe murder Doc Robinson, and was later trapped in the cave with him. As guests explore the cave, they will come upon an eerie face in the rocks. Further down, they cross a wooden bridge which seems to be suspended over a bottomless pit. Both Injun Joe's Cave and Old Scratch's Mine have one way walkways, which deposit guests on the other side of the island. Outside of Injun Joe's Cave, guests can read a warning sign that says: 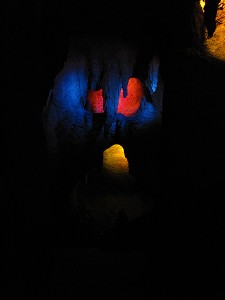 A rock formation that looks eerily like a face can be found in Injun Joe's Cave.

Do not wurry...Injun Joe aint been seen in thess parts for along time. Hiz cave is deeserted! p.s. if n you want to maybe you could wurry just a little bit- Tom

Another place guests can explore is Potters Mill. Located near Injun Joe’s Cave, Potters Mill is a small green mill that guests can actually go inside. After traveling up a winding staircase and reaching the top of the mill, guests can look out and see beautiful views of the Magic Kingdom. Just outside of the mill is Huck's Landing, where rafts may deposit guests during busier times (when two rafts are being used).

On the other side of the island guests can attempt to cross the barrel bridge. Getting across the bridge is no easy task, however many guests consider the challenge one of the highlights of the attraction. The barrel bridge leads guests over to Smugglers Cove, which gives guests more great views of the park.

Another bridge that is unique to the Disney World version of Tom Sawyer Island, is the suspension bridge. Although many guests may not realize it from afar, Tom Sawyer Island is actually made up of two islands. To get from one island to the other, guests must cross the suspension bridge. Across the bridge is Pappy’s Fishing Pier, where guests can take a break and relax. From the pier, guests can also watch the runaway trains on Big Thunder Mountain. Settler's Cabin is another interesting site on the island. This scene depicts a sleeping settler outside his cabin. The cabin used to be referenced on the Liberty Belle, and the cabin would actually look like it's on fire. Due to the deterioration of the pipes however, the cabin is no longer on fire and the scene is no longer mentioned on the boat.

The focal point of Tom Sawyer Island is Fort Langhorn. Located in the fort is a blacksmith's shop where guests can see an Audio Animatronic blacksmith. Above the shop, guests will find cannons, which are pointed out towards the Rivers of America (the canons do not actually fire). If guests want to find something that does shoot, they can climb up the watchtowers located in the fort where they can take up rifles and shoot (blanks) at passing boats. For a more relaxing time, a checker board can also be found within Fort Langhorn. 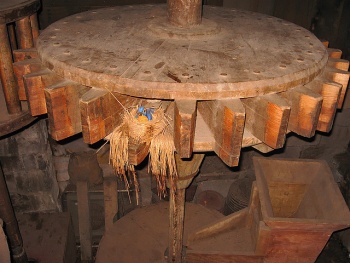 The bluebird in Harper's Mill. A reference to the 1937 Silly Symphony The Old Mill.