In order to fully understand and enjoy Typhoon Lagoon, it is important that guests know the parks backstory. According to the story:

"A furious storm once roared 'cross the sea

Catching ships in its path, helpless to flee

Instead of a certain and watery doom

The winds swept them here to Typhoon Lagoon."

Because of the storm that hit the area, everything in Typhoon Lagoon changed. Fish were swept into an inland bay, which guests can now snorkel in. All around, visitors will see beached ships and surfboards which were thrown around when the storm him. The former resort town of Placid Palms that resided in Typhoon Lagoon was severely damaged, and many of the people and businesses either closed or left all together. The parks icon "Miss Tilly", is a former fishing boat which was beached atop Mount Mayday.

The origin of Typhoon Lagoon began in 1986. Due to the popularity of their water park River Country, and also the popularity of the Wet and Wild park located in Orlando, Disney decided it was time for a new water park in Walt Disney World. Michael Eisner, the CEO of Disney, said that he wanted Typhoon Lagoon to, "Do for water parks what Walt Disney did for amusement parks when he built Disneyland 31 years ago". The location of the park was chosen, due to the fact that it was near the soon to open, Disney's MGM Studios and Pleasure Island.

Unlike River Country which relied on the nostalgia of an old fashioned swimming hole, Typhoon Lagoon was built as a modern theme park. The park was themed to look as if a large storm had hit the area, beaching all kinds of ships and even fish. The resort town of Placid Palms which resided where Typhoon Lagoon sits, was damaged badly in the storm. Because of this backstory, the facades guests see when walking around the park are usually themed to look like damaged buildings or beached ships.

The other unique attraction that Imagineers built in Typhoon Lagoon was the snorkeling pool called Shark Reef. Due to the high demand by guests to snorkel with the fish in EPCOT's The Living Seas, it was decided that Typhoon Lagoon would feature a large, full time snorkeling pool. The pool was constructed as such, that guests would swim freely with many different kinds of fish, however large dangerous fish would be kept in separate tanks. This was done so that while snorkeling, it would appear to guests that they were actually in the same area as large fish, giving them an adrenaline rush while also removing any real danger. When Typhoon Lagoon opened the estimated cost was 20 million dollars, with many on Wall Street believing the actually cost could have been as high as 50 million.

Typhoon Lagoon opened June 1, 1989 to overwhelmingly positive reviews. Although the park was not heavily advertised, guests flocked to see the newest Disney water park. Grand Opening festivities were held for the park on June 6th when the park was officially dedicated. When Typhoon Lagoon opened it consisted of: a 2,100 foot lazy river known as Castaway Creek, the Shark Reef, the Surf Pool, an area for kids called Ketchakiddee Creek, and seven waterslides. The waterslides were made up of three body slides (the Rudder Buster, the Stern Buster, and the Jib Jabber), three tube slide (Mayday Falls, Keelhaul Falls, and Gangplank Falls) and the popular speed slide, Humunga Kowabunga.

Typhoon Lagoon Surf Pool- The largest outdoor wave pool in the world, the Typhoon Lagoon Surf Pool is located at the base of Mount Mayday. The waves alternate between surf, which generates 6 foot waves, and a more relaxing bobbing waves. The surf waves are generated for 90 minutes at a time, followed by 30 minutes of the gentler waves.

Castaway Creek- A 2,100-foot lazy river, which encircles the entire park. As guests float down the river, they will go trough small waterfalls, tropical rain forests, mist screens and even Mount Mayday. A round trip around the river takes approximation 20 minutes. Their are five entrance/exit locations.

Ketchakiddie Creek- Located at north west corner of the park, Ketchakiddie Creek is a play are for small children. Miniature waterslides, shooting fountains, and even a small river rapids ride can be found here. Ketchakiddie Creek also features 10 activity areas and a small white sand beach. Guests must be under 48 inches tall to enter the area.

Mountain Trail-The Mountain Trail is a series of paths that give guests the opportunity to explore Mount Mayday. Here guests can find a little peace and quiet and enjoy some of the best views that Typhoon Lagoon has to offer. While on the paths guests can explore the Forgotten Grotto and cross Overlook Pass to see different scenery. 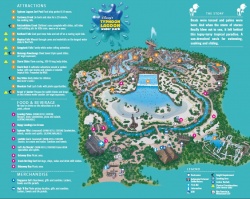 Hideaway Bay is located at the south east corner of the park, and is the most out of the way area in Typhoon Lagoon. Although not in a central location, Hideaway bay features the parks newest slide, the Crush n' Gusher.

Crush n' Gusher- The newest and perhaps most popular slide in Typhoon Lagoon, the Crush n' Gusher is located in Hideaway Bay. The Crush n' Gusher is themed around an abandoned fruit processing plant and features three different slides, the Banana Blaster Coconut Crusher and the Pineapple Plunge. Each of the the three slides propels you 400 feet through a series of sudden turns and drops. In a new feature for waterslides, guests are actually proppeled uphill by water jets at one point during the slide. The Coconut Crusher and Pineapple Plunger allow up to three guests per raft, while the Banana Blaster allows up to two.

Sandy White Beach- Also located in Hideaway Bay is the Sandy White Beach. This large beach allows guests to grab and hammock or a lounge chair and relax. The area is themed to look like a tropical island, and also includes a small wading pool.

Humunga Kowabunga- Three side by side body slides that whisk guests down five stories in the dark. Humunga Kowabunga is located on Mount Mayday, and is 214 feet long. Guests reach speeds of up to 30 mph and must be 48 inches to ride.

Storm Slides-The Storm Slides are three unique body slides located on the side of Mount Mayday. The slides take guests down three stories, through caves, waterfalls and geysers before dropping guests into the pool below. All the slides reach top speeds of about 20 mph. The slides are: the Jib Jammer, the Stern Burner and the Rudder Buster.

Keelhaul Falls-A single tube waterslide that takes guests down Mount Mayday. While on Keelhaul Falls guests will scenically twist down the mountain through caves and waterfalls before splashing into the pool.

Mayday Falls-The longest waterslide in Typhoon Lagoon, Mayday Falls begins in the shadow of Miss Till atop Mount Mayday. While on Mayday Falls, guests swerve and curve down the waterslide through caves and waterfalls. Mayday Falls is more turbulant and faster then the other "falls" waterslides and it is located near Gangplank Falls.

Gangplank Falls-Located next to Keelhaul Falls, Gangplank Falls is a family raft ride. Up to four riders can climb into a large blue tube and take a winding journey down Mount Mayday. On the slide guests will see various special effects and rock formations. of the three "falls" slides, Gangplank Falls is in the middle intensity slide. 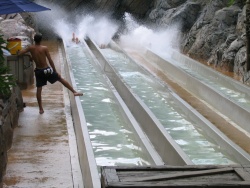 The Shark Reef area is located in the north east corner of the park and consists of the Shark Reef snorkeling tank, and the Sunken Tanker viewing area.

Shark Reef- The Shark Reef is a snorkeling pool that allows guests to swim with various tropical fish. The pool also has tanks which hold more dangerous fish such as sharks and rays. Guests are provided with all snorkeling equipment.

Sunken Tanker-The Shark Reef surrounds a sunken tanker, which guests can enter to view the various fish. Guests who don't want to get wet, can still get great views of all the fish Typhoon Lagoon has to offer.

Learn to Surf- If guests are willing to pay a little extra, they can attend "Craig Carroll’s Cocoa Beach Surf School" before the park opens. At the school guests will learn how to surf inside the Surf Pool. The lessons take 2 and 1/2 hours and is open to surfers of all experience levels.

S.A.S Adventure- For an additional cost, guests can strap on a tank of air and experience the Shark Reef in a whole new way. Guests can snorkel along the top of the water for about thirty minutes. SAS stands for Surface Air Snorkeling. Guests must be over the age of five to experience.

Leaning Palms- Located near the main entrance, Leaning Palms is a counter service restaurant. Here guests can buy a variety of items including pizza, burgers and chicken. Outside the restaurant their is shaded seating and picnic tables,

Typhoon Tilly’s-Located to the north of the Leaning Palms, Typhoon Tilly's is a snack stand that also serves a barbecued pork sandwich and chicken tenders.

Lowtide Lou's-Located next to the Bay Slides, Lowtide Lou's is a counter service restaurant. Items on the menu include, hot dogs, hamburgers, pizza and peanut butter and jelly sandwiches.

Typhoon Lagoon also features two picnic areas, the Hideaway Bay picnic area and the Getaway Glenn picnic area which is located near the front of the park.

Singapore Sals-Located near the entrance of Typhoon Lagoon, Singapore Sal's is a souvenir and sundries. Guests can also rent towels and lockers from Sigapore Sals.

North Pearl-Located near Shark Reef, guests can buy pearls and other jewelry.