Echo Lake is a land in Disney's Hollywood Studios.

What is today known as the Echo Lake area of Disney's Hollywood Studios, opened with the rest of the then Disney-MGM Studios on May 1, 1989[1]. On the first Disney-MGM Studios maps, the area was not called Echo Lake, but instead referred to as the Backlot Annex/Lakeside Circle (despite the fact that Echo Lake itself was present and called such on Disney-MGM’s opening day maps)[2]. When the park debuted, Lakeside Circle was home to the Monster Sound Show and SuperStar Television [3]. On the Monster Sound Show attraction guests were recruited to add sound effects to an "all-star haunted house mystery" [4]. Similarly, SuperStar Television was another interactive attraction that had guests recreating some of television's greatest moments [5]. Also located in the land were the restaurants: Hollywood and Vine, the 50's Primetime Café, the Tune In Lounge, Min & Bill's Dockside Diner, the Backlot Express, and Dinosaur Gertie's Ice Cream of Extinction [3].

On August 25, 1989, the Indiana Jones Epic Stunt Spectacular! debuted on the Backlot Annex [6]. This new attraction had originally been intended as an opening day attraction, however when the show was deemed unready, its official opening was delayed [7]. Despite this, since the park opened, guests had been able to visit the Stunt Spectacular and look in on “live rehearsals” [8].

Later in 1989, on December 15, Star Tours made its debut in the Echo Lake section of the Disney-MGM Studios [9] Originally opening in Disneyland on January 9, 1987, Star Tours is a motion simulator attraction set in the world of George Lucas’ Star Wars franchise. 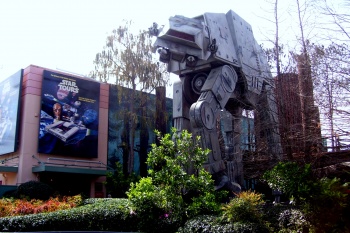 The next major change to Echo Lake came on December 16, 1990 when the Commissary restaurant opened [10]. Subsequently, on July 1, 1997, the Monster Sound Show closed [4]. The show was briefly replaced with the One Saturday Morning Sound Show from July 1, 1997 until February 20, 1999[4]. In this incarnation of the attraction, guests added sound effects to the Disney cartoon 101 Dalmatians: The Series. At this time the name of the theater was changed to the ABC Sound Studio. On April 22, 1999, the One Saturday Morning Sound Show made way for a new attraction- Sounds Dangerous Starring Drew Carey [11]. This new attraction took place almost entirely in the dark, as guests followed the adventures of undercover detective Drew Carey. After becoming a seasonal attraction, the show would finally close for good on May 18, 2012.

On March 4, 2020, the Mickey Shorts Theater opened in the former location of Sounds Dangerous. This new theater shows an original Mickey Mouse short titled "Vacation Fun", as was built to compliment Mickey and Minnie's Runaway Railway which opened on the same day.

Indiana Jones Stunt Spectacular!- This show allows guests to see (or even participate in) various stunts. Based on the 1981 film Indiana Jones and the Raiders of the Lost Ark, the show lasts about 25 minutes.

Star Tours: The Adventure Continues-Star Tours is a 3D motion simulator ride that takes guests into the world of Star Wars. The attraction is now updated to include scenes from Star Wars: Episode VII and features 54 different adventures.

For the First Time in Forever: A Frozen Sing-Along Celebration- This live musical show, features the songs of the popular 2013 Disney movie "Frozen". The show originally opened on the Streets of America's Premier Theater, before moving to its current location in the Hyperion Theater.

Jedi Training- Trials of the Temple- The current version of the Jedi Training Academy allows young guests to do battle with Darth Vader, Kylo Ren, and the Seventh Sister Inquisitor. Guests who want to participate in the show should sign up by the Hyperion Theater as early in the day as possible, as spots fill up quickly.

Monster Sound Show- In this interactive attraction, guests added their own sppoky sound effects to a murder-mystery film starring Martin Short and Chevy Chase. Hosted by Sony, the Monster Sound Show operated from May 1, 1989 through July 1, 1997. The attraction was replaced by the One Saturday Morning Sound Show.

Sounds Dangerous Starring Drew Carey- This audio show took place almost completely in the dark. As guests followed the adventures of undercover cop Drew Carey, the bungling detective would trip over his hidden camera (that guests had been watching on the screen) and plunge the theater in darkness. Audio effects would then tell guests the rest of the story. Sounds Dangerous Starring Drew Carey ran from April 22, 1999 until May 18, 2012.

SuperStar Television- This interactive show allowed guests to reenact some of television's greatest moments. Also sponsored by Sony, Superstar Television ran from May 1, 1989 until September 26, 1998, when it was replaced by Doug Live!.

Doug Live!- This live stage show featured characters from the Disney cartoon Doug. Doug Live opened on March 15, 1999, and closed May 12, 2001. The show was replaced with Get Happy with ABC.

Get Happy with ABC- This short film attraction opened on July 1, 2002, replacing Doug Live. Essentially a 25 minute advertisement for ABC's 2003 Fall schedule, Get Happy with ABC closed on October 5, 2002. 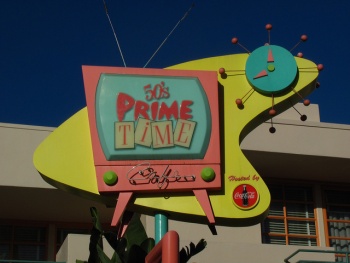 Tune In Lounge- This lounge features a full bar, as well as the entire 50's Prime Time Cafe menu.

50's Prime Time Cafe- Designed to give guests the feeling of being in the 1950s, this table service restaurant specializes in American comfort food.

Dinosaur Gertie's Ice Cream of Extinction- Based on the early 20th Century cartoon character Gertie the Dinosaur, this stand sells ice cream and other frozen treats. 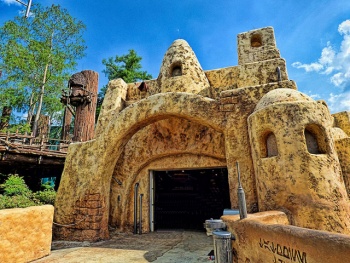 Tatooine Traders- Located near the exit to Star Tours, this shop sells Star Tours and Star Wars merchandise. Tatooine Traders is based on Star Wars: Episode I—The Phantom Menace. The shop replaced Endor Vendor following the release of Episode I in 1999.

Lakeside News- This newsstand sold comic books and other publications. Operating from 1989 until 1996, Lakeside News was replaced by Peevy’s Polar Pipeline.

Superstar Shop- The American Idol Experience's gift shop, this location operated from 2009 until 2014.

Apartment 101: Polk/Olson- This is a reference to Imagineer's John "Robin Polk and John Olson.

Apartment 202: Vais- This references Lei Vais, an artist who worked on the then Disney-MGM Studios

Apartment 204: Empero/Zovich- This references engineer Tami Empero, as well as John Zovich, who was the Chief Engineer of EPCOT Center.