The genesis of Mickey and Minnie's Runaway Railway began when Disney completed their transformation of Disney's California Adventure and turned their attention to Disney's Hollywood Studios [1]. Around this time, it was decided that the new look Hollywood Studios would "showcase the realization of Walt's dreams". With this in mind, Imagineers led by Kevin Rafferty began working on an idea for "Mickeytown USA", a new land to be created around the existing Fantasmic! amphitheater [1]. Mickeytown USA was to be anchored by an attraction that would revolve around the new Mickey Mouse shorts, and and as Kevin Rafferty describes it, would have been "some kind of a water-themed ride with seats that felt as if the were buoyant.... You'd speed along in the rapids and then reach a waterfall[1]".

When Disney higher-ups were pitched the Mickey themed attraction, they demurred, and instead wanted cancel the whole project. Undeterred however, Rafferty asked for 30 days to come up with a new idea. At the end of this stay, Rafferty and his team pitched Mickey and Minnie's Runaway Railway, which was green-lit for placement inside Disney's Hollywood Studios' Chinese Theater[1].

Mickey and Minnie's Runaway Railway was initially announced to the public at the 2017 D23 Parks and Resorts panel [2]. At this time, President of Disney Parks Bob Chapeck announced that the new attraction would replace The Great Movie Ride at Disney's Hollywood Studios. Inspired by the new style of Mickey Mouse shorts, Mickey and Minnie's Runaway Railway was advertised as a "2 1/2 D" attraction that would allow guests to enter a Mickey short. At the time, Imagineer Kevin Rafferty described the attraction as:

“This is one of the boldest…most impossible things I’ve ever worked on in almost 40 years of being an Imagineer. And you know what? That’s what I love about it. Well, that, and Mickey,” Kevin said. “This is not going to be a small attraction, it’s going to be game-changing.”

When reflecting on the creation of Mickey and Minnie's Runaway Railway, Imagineer Kevin Rafferty noted that his one regret at the attraction's opening was that former President of Imageering Marty Sklar had not lived to see its completion. According to Rafferty:

“I promised Marty – and myself – years ago that I was going to come up with an attraction with an original story and a memorable theme song,” Rafferty said. “And every time I’d see Marty, he’d ask me, ‘How that’s attraction coming?’ It breaks my heart that Marty won’t be here to experience it.” [3]

On February 11, 2018, Disney announced that Runaway Railway would be opening in 2019 [4]. At this time it was further revealed that guests would begin the attraction by watching a Mickey Mouse cartoon where Mickey and Minnie are getting ready for a picnic. As the duo drives along side Goofy conducting a train, guests would then enter the cartoon. Also showcased at this time, was the fact that a new theme song would be created especially for the attraction [4]

During the development of Mickey and Minnie's Runaway Railway, a new character named "Chuuby" emerged as a star of the attraction. While the singing bird was originally created as a background character, over time he gained a more prominent role ref> https://allears.net/2020/03/02/its-almost-time-to-meet-chuuby-one-of-the-stars-of-mickey-and-minnies-runaway-railway-in-disney-world/ </ref>. Chuuby's name was a result of a misspelling of the word chubby that stuck.

The score for Mickey and Minnie's Runaway Railway was composed by Chris Willis, who also composed music for the current incarnation of Mickey Mouse shorts [5]. According to Rafferty, the score was recorded in Hollywood, with a 65 piece orchestra.

Although originally intended for a 2019 opening, Mickey and Minnie's Runaway Railway was officially dedicated, and opened to the public, on March 4, 2020. [6]. Since opening, the attraction has not seen any major changes. 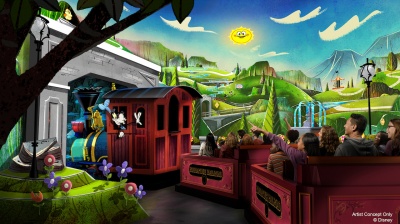 As riders enter the Chinese Theater, the walls are lined with posters for Mickey Mouse shorts. Guests then cross into the preshow theater, where they watch Mickey's newest cartoon "Picnic Perfect". As Mickey, Minnie and Pluto set off to enjoy a picnic, they briefly sing "Nothing Can Stop Us Now" (the attraction's theme song). At this point however, the duo hit the train track and pie flies out of the car landing in the smokestack of Goofy's train. Goofy then crashes his train into the screen, allowing guests to enter the cartoon.

After walking through the screen, guests board Goofy's train and begin their adventure in Runnamuck Park, where Mickey and Minnie are going to try to have their perfect picnic. Unfortunately, while passing through a tunnel, the duo hits the train switch, sending the train in the wrong direction. Mickey and Minnie quickly follow, and drive their red convertible alongside the train. At this point, the train's cars break off from Goofy and exit the tunnel, entering the attractions Wild West scene. Here, there is a stampede, and all four of the train's cars split off from each other. Although Mickey and Minnie appear on horseback and try to lasso the runaway train, they are unsuccessful and guests head into the next scene.

Guests then enter the Carnival Chaos scene, where an entire carnival is laid out before them. Here, riders can see Donald Duck trying to get ketchup on his hot dog, and normal carnival activities unfolding. Mickey and Minnie then appear floating on a group of balloons, assuring the runaway passengers that they will be right down. Things take an unexpected turn however, when a tornado strikes the carnival, spinning the cars out of control, and sucking up Mickey, Minnie and Pluto. 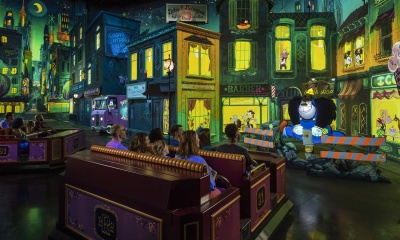 The city scene on Mickey and Minnie's Runaway Railway

Although it initially seems as if everyone has been dropped safely on a scenic island paradise, just as Mickey exclaims that, "nothing can stop us now", the scenery quickly changes and the volcanoes that surround the train car seem to be on the brink of eruption. At this point, the train car begins to head down a rapid river, straight towards a water fall. As Mickey and Minnie paddle a large leaf nearby, it seems as if everyone will surely fall towards their doom. After Mickey, Minnie and the guest's train car plummet over the falls however, they find themselves in an underwater world. With a menacing giant squid nearby, the gang makes their escape by "pulling the plug" and flushing themselves out of danger.

After escaping the underwater threat, riders now find themselves in the middle of a busy cityscape. In this scene, Jackhammer Pete rattles the neighborhood, and Donald is seen delivering flowers to Daisy at her dance studio. Entering the studio, guests come face to face with Daisy who instructs them to dance. The four train cars then dance in synchronized fashion.

Congaing out the studio, and despite Minnie's warnings, the train cars enter a factory, where it seems as if riders will surely be crushed by a machine labeled "The Smasher". As the cars race towards their demise, Mickey and Minnie work frantically to turn the machine off, doing so just in the nick of time.

After the close call, guests arrive back at Runnamuck Park at nighttime. In the distance, Mickey can be seen strumming the attraction's theme song "Nothing Can Stop Us Now" as Pluto and Minnie attentively listen. As fireworks go off an unconcerned Goofy waves to his friends. The train then arrives back at the barn, where guests disembark. 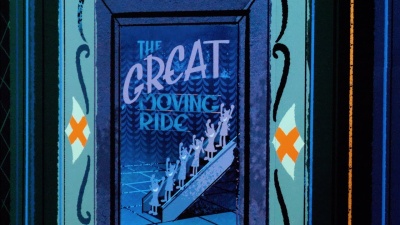 A poster advertising "The Great Moving Ride", a nod to the former Great Movie Ride attraction that was housed in the Chinese Theater