From The Mickey Wiki: Your Walt Disney World Encyclopedia!
Jump to: navigation, search
Japan is a pavilion located within World Showcase in Epcot. It is located between the The American Adventure and Morocco.

Although a Japan pavilion had always been planned for World Showcase, the pavilion went through many changes before its creation. As early as 1977, Imagineers had planned an omnimover attraction for the Japan pavilion [1]. At this time, Disney still planned on having each World Showcase pavilion inside an identical semi-circular building. Inside however, guests would have boarded their ride vehicles and taken guests on a tour of a wide variety of Japan's landscapes and landmarks.

Once it was decided that each World Showcase pavilion would have architecture and theming unique to the individual country, Imagineering initially chose building designs for the Japan pavilion were based on the traditional Pagoda, which had actually originated in China. Once this error was recognized, the whole pavilion had to be re-imagined [2]. The final version of the Japan pavilion was inspired by various structures from all of Japan's different regions. Imagineers and consultants from Mitsukoshi designed the pavilion to give guests a representative sampling of a variety of traditional structures, which would also serve practical needs. For example, the pavilion's torii was modeled after one found near Hiroshima Bay. The Goju No To pagoda on the other hand was based on a similar structure in Nara.

The Japan pavilion eventually opened with the rest of EPCOT Center on October 1, 1982. At this time, the pavilion included three restaurants (Temoura Kiki, Matsu No Ma lounge, and the Teppanyaki Dining Room), the Mitshukishi department store, and the Bijutsu-kan (a museum). The icon of the Japan pavilion is the Goju No To five-story pagoda, a building that is most associated with Buddhism. The five tiers of the pagoda each represent an element which Buddhists believe the universe was created from. Guests can often see live entertainment near the pagoda.

When the Japan was initially built, a massive show building was constructed behind the fortress [3]. The building was going to be home to an attraction known as "Meet the World"- a "carousel theater" type show which was being developed for EPCOT Center and Tokyo Disneyland simultaneously [2]. Unlike The Carousel of Progress which used stationary sets with a rotating theater, Meet the World was going to have a stationary theater with rotating sets [4]. The theater would have featured six, 600 seat theaters, giving the ride an hourly capacity of 3,600 guests [2].

The Meet the World attraction would have followed a young boy, a young girl, and a magical crane, as they led the audience through Japan’s history[2]. The show was to have consisted of four acts, which would use in-theater effects, projections, and Audio Animatronics, to tell the story. Act I of Meet the World was going to show the origin of Japan's islands and their volcanic beginnings. In this scene, the audience would have been introduced to their hosts as they traveled back to islands' early history[2]. Act II would have then featured Japan reaching out to the world, and the world coming to it. This scene would have ended with the country in self-imposed isolationism[2]. Picking up here, Act III was going to show the battle between the proponents of isolationism and the proponents of expansionism[2]. Finally, Act IV would have shown Japan just after the 1940s, now a modern nation, and once again reaching out to the world. A final scene would then have featured the hosts saying goodbye[2]. 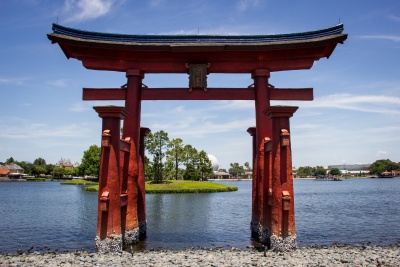 Although the show was designed and ready to go, Meet the World never made its debut in the Japan pavilion. The reason for this may have been that during construction, errors were found in the show building [2]. It was decided that a new show building would need to be created, and this put the future of the attraction in jeopardy[2]. With EPCOT Center already over budget, the attraction was eventually pushed to Phase II of the park, before the project was cancelled [2]. Another reason the attraction was not built may have been due to the fact that the show glossed over Japan's involvement in World War II [4]. No matter the reason behind the decision, Meet the World was never installed in the Japan pavilion.

Since Meet the World was cancelled, other ideas have been suggested for the empty show building. One idea, called for a Circlevision-360 film aboard a bullet train [4], while in the early 1990s, Imagineers pitched an indoor roller coaster, which was to be housed inside a replica of Mount Fuji [2]. Adding the potential of this proposal, Fuji Film offered to cover the cost of the coaster’s construction and operation in return for sponsorship [2]. The deal stalled, however, due to Kodak’s (who sponsored Journey Into Imagination among other things in Walt Disney World) unhappiness with Fuji Film moving into Walt Disney World. Eventually, plans for the coaster fell through [2] and the show building still remains unused.

Throughout its history the Japan pavilion has seen a number of changes. The first came in 1991, when the Yakitori House was expanded [2].

In 2007, the Japan’s Teppanyak Dining Room was completely redesigned and expanded [2]. The restaurant eventually reopened as the more modern Teppan Edo [3]. The two other restaurants in Japan, Tempura Kiki and the Matsu No Ma lounge, were combined into a new dining location called Tokyo Dining [3]. Later that year, the refurbishment on the pavilion's fortress was also completed [2]. In December 2011, the Yakitori House closed for refurbishment. When the restaurant reopened, its name was changed to Katsura Grill [5].

On October 20, 2015 a new exhibit titled "Kawaii - Japan's Cute Culture" opened in the Japan pavilion. This gallery features various pieces that give guests a taste of Japan's Kawaii culture. [6]

There are two main buildings in the Japan pavilion; the first is large imposing building modeled after the Gosho Imperial Palace in Kyoto. Known as the Hall Of Ceremonies, this building holds the Mitshukishi department store on the first story, as well as Tokyo Dining and Teppan Edo on the second. The back of the pavilion is themed to look like a fortress, which was modeled after the Himeju Castle. The fortress is surrounded by a moat. Currently the fortress houses a Kidcot station, a museum, and a portion of the Mitsukoshi department store. The Japan pavilion also holds a garden which is centered around a koi pond.

Perhaps the two most recognizable structures are the pavilion are the Goju No To pagoda and the torii gate located on the pavilion's shore. 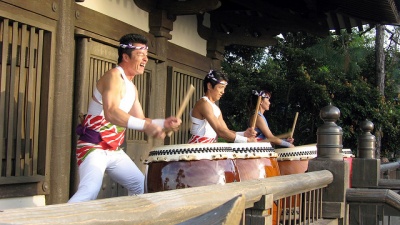 At this time, the Japan pavilion does not feature any attractions.

Takumi-Tei- The Japan pavilion's signiture restaurant, Takumi-Tei offers guests both a la carte options, as well as a a multicourse tasting menu.

The Japan pavilion has no live entertainment at this time.

Matsuziza- This group of Japanese taiko drummers performed five days a week at the base of the pavilion's pagoda. Matsuzika's final performance was on March 15, 2020.