Splash Mountain was an attraction located in Frontierland.

On June 25, 2020, Disney announced that Splash Mountain would be rethemed to a Princess and the Frog attraction. It is unclear at this time, when the renovation will take place [4].

In May 2018, a new preshow video was added to Splash Mountain's queue [7]. Subsequently, in August 2018, Ziploc became the official sponsor of Splash Mountain. As part of the agreement, Ziploc will also furnish plastic bags for guests to use while riding the attraction [8].

Legend has it that deep in the “New-nited States of Georgia,” live critters that walk and talk in the same manner as human folk.
At the center of this magical land is Chick-A-Pin Hill and it's here that the Beaver Brothers had built their sturdy new dam.
But unbeknownst to them, Rackety Raccoon had also constructed a juice producing still in the same area. And it seems that while Rackety was concocting a new, experimental brew, he used a few too many blueberries with disastrous results.
When his still exploded, it took the Beaver Brothers' dam with it and water began to rush downhill and through the many caves, burrows, holes, and tunnels that crisscrossed the mountain.
From that moment on, the local critters started calling their home Splash Mountain and the name stuck. [9] 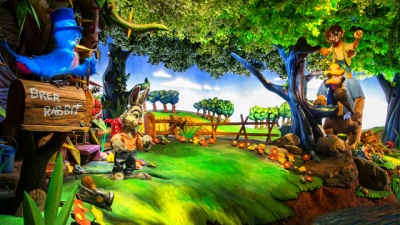 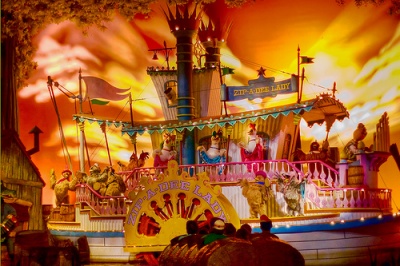 Songs in the Attraction [10]

On October 10, 1985, Disney pitched McDonald's the idea of sponsoring Splash Mountain. In a pitch book created specifically for a meeting between the two companies, Disney created concept art that featured Brer Frog as the official "spokescritter for McDonald's". It is also notable that at this time the attraction was titled Brer Rabbit's Splash Mountain [17]. Although McDonald's would pass on sponsoring the attraction, the two companies would reach an “an unprecedented global marketing alliance” in 1996, that allowed McDonald's to open dining locations within Walt Disney World's theme parks [18].