Ellen's Energy Adventure is an attraction located within the Universe of Energy in Epcot.

The show that would eventually become Ellen's Energy Adventure was originally developed as a new attraction for Exxon's Universe of Energy pavilion. Although the Universe of Energy had been popular with guests at its onset, by 1996 attendance in the pavilion had dropped substantially. Furthermore, the information presented in the attraction was dated, and guests began to complain that the ride's tone was too serious [1]. With these problems in mind, Exxon and Disney agreed that the pavilion needed a new attraction, with Exxon asking that it be ready in time for the pavilion’s 15th anniversary in 1997 [2].

After the Universe of Energy closed, changes were made to the attraction's infrastructure in order to accommodate Ellen’s Energy Crisis. In the preshow theater, the rotating Radok screens were taken out and replaced by five standard screens [2]. Initially, Disney had planned on reusing the Radok screens, as Bill Nye the Science Guy was to show DeGeneres a "kinetic energy mosaic". As the attraction continued to develop however, this idea was scrapped and the screens were removed.

During the renovations, the pavilion's first theater received a brand new film and audio system. At this time, the theater's gold curtains were removed and replaced by stationary black curtains. Furthermore, the mirror walls that were used to reflect and multiply the images on the theater's three rear screens (giving the attraction's finale a seemingly endless scope) were removed and replaced with sound insulation [2]. Like the first theater, the second theater also got a new film, which combined new footage with recycled footage from the original attraction [2].

Moving into the Primeval Diorama, the scene's storm effects were toned down and a significant amount of vegetation was added [2]. At this time, the dinosaurs’ skin color was also changed based on new scientific findings [2]. As far as the dinosaurs figures themselves were concerned, the Ornithomimus who was once drowning in a mud pit, was relocated and reprogrammed so that it now squirted guests with water [2]. An Ellen DeGeneres Audio Animatronic also replaced a fish eating Pteranodon, and the Elasmosarus' programming was changed so that it now attacked Ellen, as opposed to attacking guests [2]. Finally, the quaking rock effect and the wave pool effect that were used in the scene were both deactivated [2].

The Universe of Energy/Ellen's Energy Crisis hybrid presented its own unique set of problems. Without the Radok screens, the first preshow film did not achieve the effects that were initially intended. In the Primeval Diorama, the dinosaurs had their new colors, and although the new dialogue for Ellen's Energy Crisis was muted, the attractions redone score played [3]. Furthermore, the Ellen Audio Animatronic that was installed in the Diorama was deactivated and hidden from guest's view behind a boulder [2]. This meant that the Elamoursaurs was now attacking nothing. In the attraction's second theater, the monitors and maps that the ride narration referred to had already been removed [2]. To fix this, a new narration was installed that made the attraction seem more current, while also omitting any references to the removed props[2] and the new "K-NRG" radio mast was hidden behind a black drape [3].

Finally, due to the fact that the mirror walls had been removed from the third theater, the attraction lost its grand finale [2].

After operating throughout the summer, on September 1, 1996, the Universe of Energy attraction finally closed for good [2]. Subsequently, on September 15th 1996, Ellen's Energy Crisis had its first soft opening [1]. A few weeks later, On October 1, 1996, the attraction's name was changed to Ellen’s Energy Adventure, and its official Grand Opening was held[1]. On hand for the festivities were attraction stars Alex Trebeck and Bill Nye the Science Guy [4].

Following Ellen's Energy Adventure's opening, the attraction experienced a relatively few number of changes. In 2001, Exxon and Mobil merged, and thus ExxonMobil became the sponsor of the attraction [2]. This sponsorship was short-lived however, because in 2004 the company chose not to renew [1].

In 2009 the attraction's ride and sound system was upgraded [5].

In the later years of Ellen's Energy Adventure's existence, technical problems plagued the attraction's Audio Animatronics. First, in 2014, The Elasmousaurus was removed after years of declining movement [3]. By September of that year, the Ellen DeGeneres Audio Animatronic was also removed and the Pteranodons were moved into her original spot in 2015. By 2017, even one of the Pteranodons had been removed[3].

Ellen's Energy Adventure was a 45 minute attraction that consisted of four films and a dark ride. 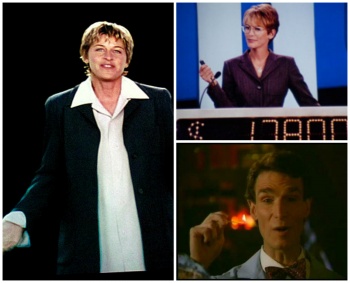 As guests entered the attraction’s first room, they could see a dark movie screen on the wall. After everyone was in the theater, Ellen DeGeneres walked onto the screen and began to talk to the audience. Ellen introduced herself as the spokeswomen for the Universe of Energy, which she admitted was somewhat surprising. She then told guests that while she is an expert on a lot of things, not too long ago she could have cared less about energy. Ellen then explained that one day everything changed as she was watching TV in her apartment. With a snap of her fingers (on her second try) Ellen transported guests back to her apartment, where they heard the TV announcer say, "This is ... Jeopardy!" As Ellen watched Jeopardy, her neighbor Bill Nye the Science Guy walked in. Bill explained that he came over to borrow some foil for an experiment, but soon enough he was watching the game show too. The announcer then told guests that the first contestant on that day's Jeopardy was a professor of energy at Princeton University, named Dr. Judy Peterson. Hearing this, Ellen exclaimed that Judy was her "know it all" roommate in college. She then claimed that both Judy and energy were stupid, which Bill disagreed with before leaving. After Bill left, Ellen said that even if the universe needed energy, she didn't, before she falls asleep.

Back in the present time, Ellen appeared again in order to tell guests that every time somebody takes a nap in front of the TV, that meant that they were going to have a dream. The scene then shifted to Ellen's dream (or nightmare) in which she appeared on Jeopardy alongside Dr. Judy Peterson and Albert Einstein. Alex Trebek (the host of Jeopardy!) told the contestants the categories for the day’s show, which all had to do with energy. After the end of the first round of play, Judy had $17,800 while Einstein had zero and Ellen had negative money. Although defeated, Ellen declared that since it was her dream, she could still win. Bill Nye then appeared (to meet Einstein) and agreed to teach Ellen about energy by taking her back in time.

Following this 8 minutes preshow video, guests entered a theater where they were seated in one of six seating areas.

After everyone was seated in the first theater, the theater itself turned 180 degrees so that guests were now facing another large screen. This new screen featured Ellen and Bill standing in almost complete darkness. Although Ellen was confused, Bill explained that they were going to witness the Big Bang, which many scientists believe is how the universe started. Bill then told Ellen that they are about to see how the universe formed, and that they should probably get out of the way. All of the sudden, the universe exploded and guests saw a high speed depiction of how the Earth was created. In the scene, volcanoes erupted, mountains were formed, and vegetation covered the Earth. Bill then emerged from a jungle and told Ellen that they were "two hundred twenty million years in the Earth's past, give or take a day". When Ellen asked Bill where all the energy was, Bill explained that when the plants and animals that they saw around them died, "time, pressure and heat" would turn them into fossil fuels. Bill then said that he wanted to go explore, and while Ellen was at first hesitant, a dinosaur roaring convinced her to go too. Following the six minute film, the theater seats broke into six ride vehicles and guests proceeded into the next room. 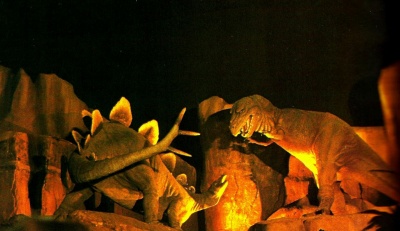 An Allosaurus and Stegosaurus fight in the Primeval Diorama

After leaving the theater, guests found themselves in the Primeval Diorama, where they could no longer see Ellen or Bill (although they could hear their voices as they proceeded through the scenes). In fact, the first thing that guests heard in the Primeval Diorama was Ellen talking to a roaring dinosaur, who she had mistaken for Bill. After the real Bill called her over, the two reunited and moved with guests through the diorama. The first creatures that guests encountered on their journey was a giant millipede and an Edaphosaurus. Further on, guests could see a Brontosauruses eating swamp plants. The large dinosaur then sneezed on guests, while nearby, duck-billed Trachodons could be seen bathing in a small body of water.

Up ahead, guests saw perhaps the most recognizable scene in the attraction- an Allosaurus and a Stegosaurus fighting on a cliff. Nearby Pteranodons were perched around an erupting volcano, and further on, guests could see Ellen fighting off an Elasmosaurus with a stick. As she defended herself against the dinosaur she said:

Guests then left the Audio Animatronic portion of the show, and they entered the second theater.

After entering the second theater, the attraction’s ride vehicles reassemble and guests heard a radio broadcast. The broadcast said that the year was 55 million B.C. and weatherman Willard Scott informed guests that the forecast called for a decrease in the dinosaur population and an increase in mammals. The radio also mentioned that cockroaches were “two hundred million years old today", but that an incoming comet might get rid of them. The radio announcer then called for a traffic report, from which guests learned that the mammals continued to boom.

The radio broadcast then moved forward in time to one million B.C., and guests learned that mammals were now dominating the Earth, while the dinosaurs had gone extinct. Willard Scott then gave another weather broadcast in which he said that the Earth was getting colder and mammals needed to cover themselves in fur. Subsequently, The broadcast shifted to 900,000 B.C., where guests learned that woolly mammals, saber-tooth cats, and giant antlers had begun to appear. Willard then informed guests that the glaciers were receding, the planet was getting warmer, and a new kind of mammal was soon to evolve. The radio broadcast then ended and guests watched another film.

The next film began with Bill Nye back in the jungle. While he looked for Ellen, she swung behind him on a vine and began to protest the whole adventure. Bill then informed her that they were now at the dawn of humanity, and a very important discovery was about to take place. Guests then saw a caveman discovering fire. Following this discovery a montage of man's progress using various forms of energy (including wind, steam, and gasoline) was shown. The montage ended with Bill and Ellen flying in a helicopter, with Ellen asserting that she was ready for Jeopardy. Bill proceeded to tell her that she was not quite ready, and he began to explain potential future energy sources including solar, wind, and hydroelectric energy- which all had their own problems. Bill also further explained fossil fuels such as coal, natural gas, and oil, saying that although these sources of energy would eventually run out, things like off shore drilling and satellites could help find new sources. Bill and Ellen also discussed how nuclear and fusion energy could also be solutions to the planet's energy problems. The two celebrities concluded that as long as we keep working on it, there would be lots of energy options in the future.