The Land is a pavilion located in Epcot.

Development and Sponsorship by Kraft

The genesis of The Land pavilion dates back to the original concepts for EPCOT Center [1]. Initially, plans called for an Ecology and Mineral pavilion to be located in Future World; however the focus was eventually broadened to include all of the planet's environments in order to make the pavilion more appealing to potential sponsors [1]. In Walt Disney Production's 1977 Annual Report, Disney stated that The Land pavilion would "illustrate man's role as the protector of the Earth and its environments" [2].

The Land pavilion was originally going to be sponsored by a Georgia Pacific (a logging company) [3]and thus the first incarnation of the pavilion was created with a focus on natural habitats and the earth’s environments [4]. This early version of The Land called for the pavilion to be made up of seven crystal structures that would have housed five different environments, plus an agricultural and an urban section [2]. After entering this version of The Land, guests would have first watched a brief theater show set on an American farm [3] . Taking place in a structure similar to the Carousel of Progress, this Carousel Show would have introduced guests to the Landkeeper, who would serve as guest's guide throughout the pavilion [3]. After watching the preshow, guests would enter the rest of The Land which would have been themed as the Future Fair [3]. The feature attraction of this early version of the pavilion would have been Blueprints of Nature, an attraction where guests would board a "balloon" (using a track mechanism similar to Peter Pan's Flight) and follow the journey of snow as it melted into water and flowed through earth's various ecosystems [5]. According to Imagineer Tony Baxter:

The blueprints unfolded in the snowflakes of winter, then the germinating seeds of springtime, the flowers of summer, and the leaves of the fall. As we observed this never-ending cycle, the balloon soared upward with the flying eagle. "For man alone can learn from nature and can soar with the birds". The ride concluded by flying through all the crystals. When you looked down, you got an overview of the area you would soon be visiting on foot, which was the third part of the show. 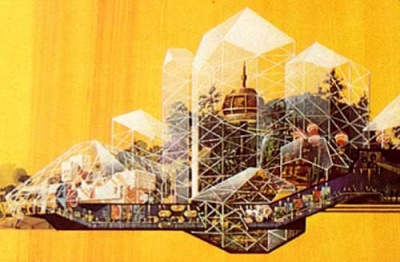 Concept art for Tony Baxter's vision of The Land.

Although fairly well developed, the direction of The Land pavilion changed in 1978 when Georgia Pacific dropped out and Kraft announced that it would be sponsoring the pavilion (for 30 million dollars) [6]. Instead of focusing on the earth’s habitats, the focus of The Land now shifted towards agriculture, and how humans cultivate their food [1]. With Kraft as its sponsor, the layout of the pavilion itself was also redesigned. Tony Baxter left the project to work on what would eventually be the Journey Into Imagination pavilion (where he would eventually rework the Landkeeper into Dreamfinder) and Imagineer Rolly Crump and his team were tasked with coming up with new plans for The Land[3]. At this time, the pavilion was reshaped to look like a glass pyramid or mountain [4]. Furthermore, the entrance was given murals to represent entering the earth’s core [1]. The new plans also called for The Land to be made up of a boat ride, later named Listen to the Land and the "Harvest Theater" which would show Symbiosis, an environmental film [1]. Originally, The Land pavilion was also going to feature temporary greenhouses; however it was later decided to permanently incorporate them into Listen to the Land[1]. The final addition to the pavilion came when sponsor Kraft decided that they wanted the pavilion to include an attraction that focused on nutritional information [1]. With this in mind, Imagineers created Kitchen Kabaret- an Audio Animatronic musical revue which featured singing food characters.

Besides its three main attractions, the Land pavilion also included a large food court on the first level, called the Farmers Market, as well as a rotating restaurant on the second floor (a holdover from the pavilion’s original design) called the Good Turn Restaurant [1].

The first major change to The Land came in December 1982 when the shop Broccoli & Co. opened [8]. This little store was themed as a tie in to Kitchen Kabaret and it sold plants, small souvenirs, and (obviously) Kitchen Kabaret merchandise. Besides the addition of Broccoli & Co., the only other significant change to The Land pavilion during the 1980s came in 1986 when the Good Turn restaurant was renamed The Land Grille Room [9]. 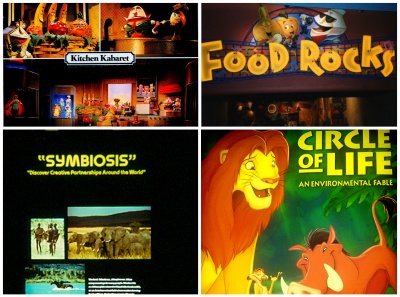 When Nestle took over sponsorship, Symbosis was replaced with The Circle of Life, and Kitchen Kabaret was replaced by Food Rocks

When Nestle assumed sponsorship of The Land in 1993, renovations on the pavilion began immediately. The first major update came to the aesthetics of the pavilion itself, when the original colors of brown and blue were replaced with a more vibrant color palette [1]. At this time, the Farmer’s Market was rethemed as the Sunshine Season Food Fair, the Land Grille Room became the Garden Grill, and the Broccoli and Co. was renamed the Green Thumb Emporium [1] [9].

The next attraction to be updated was Kitchen Kabaret. The show closed on January 3, 1994, before reopening on March 26 as “Food Rocks” [11]. Instead of focusing on nutrition as Kitchen Kabaret had, Food Rocks instead parodied the top musical acts of the time [12]. The last of The Land's attractions to be renovated was Symbiosis, which was shown in the Harvest Theater. Symbiosis closed on January 1, 1995 in order to make room for a new for a new film: Circle of Life: An Environmental Fable [13]. The new attraction featured the characters Timon, Pumbaa and Simba from the 1994 Disney movie The Lion King. Circle of Life: An Environmental Fable opened on January 21, 1999 [14].

Other minor changes to come to The Land pavilion during the mid-1990s refurbishment included:

Following the mid-1990s refurbishments, The Land pavilion remained essentially unchanged for eight years. This ended however in 2003, when Disney decided to bring Soarin’ (a very popular motion simulator attraction in Disney’s California Adventure) to Epcot. Initially, Disney planned on adding Soarin' to one of the World Showcase pavilions[15], however when a proper location could not be agreed upon, it was decided to house the attraction inside The Land [15]. Although the attraction itself would take place in an expansion building, the queue for Soarin' was designed to go through the area that housed Food Rocks [1]. Quietly, construction on Soarin' began in August of 2003, before the attraction was officially announced on October 10th[15]. Despite the fact that its days were numbered, Food Rocks remained open until January 3, 2004[1]. The Land pavilion itself remained open for part of Soarin's construction. On January 2, 2005 however, the entire pavilion closed for a three month refurbishment [16]. During the renovation, Soarin' was integrated into the main atrium and changes were made to Living with the Land [1]. Also at this time, Sunshine Seasons was redesigned and the pavilion's central fountain was removed in order to add more seating [4]. Other changes that happened to the pavilion during the 2005 refurbishment included: 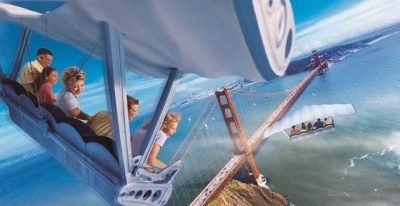 Despite the significant changes being made the pavilion, the construction only took two weeks longer than expected [4], and by April 29, 2005 the entire pavilion was fully operational [1]. Since the 2005 renovation, The Land has only experienced some minor changes. In 2006, the skippers were removed from Living with the Land [17] and in 2007 interactive games were added to Soarin's queue [18]. Subsequently, on February 13, 2009, Nestlé's sponsorship of The Land ended [17]. Since that date, the Land has remained sponsorless (although Chiquita Brands International has sponsored the Living with the Land attraction since 2011 [19]).

On June 17, 2016, the new attraction Soarin' Around the World replaced the original Soarin' Over California attraction [20]. The new motion simulator attraction allows guests to hang glide over various world landmarks.

On February 3, 2018, Circle of Life: An Environmental Fable closed [21]. Subsequently, on March 19, 2019, Disney announced that a new film titled "Awesome Planet" would open in The Land pavilion's Harvest Theater [22].

Awesome Planet- This 10 minute film showcases the many wonders and environments that the planet Earth has to offer.

Living with the Land- This narrated boat tour teaches guests about the history of "the land" and the effect that humans have on it. The second half of the attraction takes guests through a working greenhouse where futuristic growing techniques are showcased.

Food Rocks- Food Rocks was an Audio Animatronic show that was themed to be a musical fundraiser to promote healthy eating. Parodying many of the top musical acts of the time, Food Rocks ran from 1994 until 2004 when it was closed in order to make room for Soarin'.

Symbiosis- Symbiosis was a 70mm film shown in the Harvest Theater. The film focused on human's destruction of the land, and the balance they needed to strike between technological advancement and protecting the environment. Symbiosis opened on October 1, 1982 and closed on January 1, 1995, when it was replaced by Circle of Life: An Environmental Fable.

Soarin' Over California- The original incarnation of Soarin' allowed guests to hang glide over various California landmarks, ending with a visit to Disneyland. The original Soarin' opened on May 5, 2005 and closed on June 16, 2016. 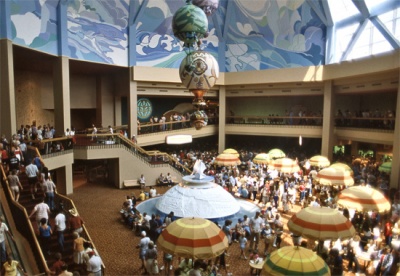 Sunshine Seasons- This food court allows guests to choose food from four different locations: the Soup & Salad Shop, the Asian Wok shop, the Sandwich Shop & Bakery, and Wood-Fired Grill Shop. The Sunshine Seasons is located on the first level of the pavilion, across from Soarin'.

Although they have gone by different names, The Land has always included a food court and a rotating restaurant. The former names of the restaurants are:

Farmers Market- The original food court in The Land pavilion. This restaurant featured Kraft products, and was open from 1982 until 1993 when Nestle assumed sponsorship of the pavilion.

Sunshine Season Food Fair- The second incarnation of The Land's food court opened in 1994, following a lengthy refurbishment. The food court was once again renovated in 2004 and renamed simply Sunshine Seasons.

Soarin' Tour Desk- Located to the left of Soarin's entrance, the Soarin' Tour Desk allows guests to book spots on the Behind the Seeds Tour, as well as purchase small plants known as Mickey's Mini Gardens and seeds.

Green Thumb Emporium- Located across from the Soarin' Tour Desk, the Green Thumb Emporium sells Soarin' merchandise, Mickey's Mini Gardens, and seeds. The shop takes its name from a much larger store that was formerly located in The Land from 1994-2005.